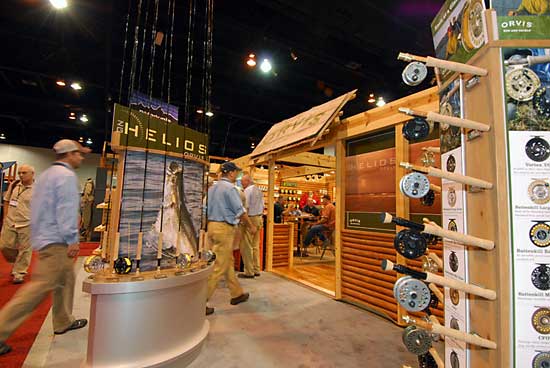 Retailers and press mingle with fly fishing manufacturers each fall at the Denver Fly Fishing Retailer Show, where most new products are first announced. photo by Zach and Lauren Matthews | www.itinerantangler.com

AS THE TITLE of our annual new product review suggests, we know as well as anyone that fly fishing can be done with a bare minimum of gear. Gear neither makes our sport nor defines it, and anyone who’s been struck down by gear worship typically exhibits all the other worrisome symptoms that come with it: typing ‘fly rod’ over and over into an EBay search box, drinking cold fly-shop coffee in the dead of winter, and spamming friends and even minor acquaintances with barely informed opinions on drag-surface heat dispersion, cork sources, and the likelihood that cross-border incursions into Pakistan will increase the cost of fly tying scissors. Some, seemingly convinced that their gear made all the difference, will even hold a rod in their teeth while pushing a fish into the camera lens.

Fact is, there are fish almost everywhere that can be caught on dog-hair flies at the end of four feet of garden string attached to a car antenna.

That’s why my favorite moment from this year’s Fly Fishing Retailer show in Denver was speaking with the smiling Ted Juracsik and hearing him say, “You know, all these new reels are nice, but we could catch these fish on just about anything.” Often it’s a craftsman of Juracsik’s stature restating the obvious that helps us understand why good gear works, and why it lasts. Honesty is the best marketing of all.

The big news this year: in response to fears of spreading didymo, mud snails and other aquatic hitchhikers, everyone is trying to create the world’s stickiest rubber-soled wading boots. Photo courtesy of Simms

The number of fly reel manufacturers displaying their wares at the show this year was astonishing. And exhibitors went all-out showcasing the largest number of fly rods I’ve ever seen in one location. But at the same time, a handful of exhibitors answered our request for a run-down of new gear with a baleful, “We don’t have any.” The U.S. stock market dropping 600 points on day one of the show put an exclamation mark on the woes of smaller and medium-sized manufacturers, some of whom told me flat out that they wouldn’t be back next year. (As one company president said to me, at the end of three long days, “We may be returning to the good old days of a few large manufacturers supplying the market.”) But just as in every review we’ve done of fly fishing’s fall product displays, I was impressed by the number of innovations — most by established brands but some by small marketers — in almost every category.

Here are the highlights:

While Monic is experimenting with new, less-sticky coatings on their saltwater fly lines,Cortland has come out with their own clear line. 3M Scientific Anglers is extending the Sharkskin concept to many more tapers, while RIO has reformulated their entire saltwater line based on extensive field-testing.

Innovative designs like that of Ross’s new Vexsis convince us once again that even if the wheel can’t be reinvented, it can still be improved upon. Photo courtesy of Ross Reels

Ross has a hot new reel or two, Abel is introducing a sweet quick-release spool, Tibor is pleasing spey fanatics, Sage is going to super-light-weight carbon spool construction, and Hatch Reels is wowing folks with their engineering. Hardy and Grey’s is already having a hard time keeping up with demand for their reintroduced classic, the “Perfect.”

Orvis is making a 12-weight that weighs less than many 9-weight fly rods, Winstonis extending the crispness of their Boron II rods into additional sizes, and Sage is one-upping their own TCR rod line. Meanwhile Ross and Echo are making fly rods for kids, Hardy and Grey’s redefines “high end,” and Loomis gets rave reviews at the casting pool for their new shorter rods.

Scientific Anglers will introduce an entirely redesigned line of see-through fly boxes,Flambeau is bringing slit-foam designs to the masses, and Cliff Outdoors brings out another couple of bullet-proof do-it-all box.

Patagonia is all about recycling in style for ’09, with new fabrics and finishes and smart design changes in jackets, waders, packs and clothing. Meanwhile Redingtonis single-handedly growing the middle tier of soft goods with some sleek new jackets, shirts, pants and waders. Fishpond is innovating in rod cases and William Joseph in pack design. And of course Simms is holding nothing back, introducing a new high-wicking, anti-microbial fabric for sportswear, comfortable new pant waders, and — last but not least — the newest innovation in sticky-rubber replacements for felt soles, which quickly became the target of conservationists around the world this year.

There are plenty of more new products described in the pages that follow, along with some nifty gadgets.

And as we say every year, “Get the gear that helps you go. Forget everything else.”