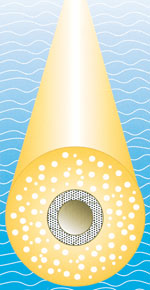 Most modern fly lines use tiny bits of tungsten in their coatings to help fly lines sink, and tiny "micro balloons" (pictured above) to help them float. Illustration courtesy of Scientific Anglers

AS WE NOTED LAST YEAR, there are around 2000 different fly lines in production by fly fishing manufacturers at any one time. The amount of effort that goes into researching and satisfying the desires of every fly fisher out there is immense. Fortunately there are also companies out there with the desire to make fly lines that suit the whims of almost every caster. Some of the companies, like 3M Scientific Anglers, are large and pride themselves on the ability to quickly engineer new tapers and coating formulations. And some are small, like Flow Tek/Monic, who’ve built a brand around transparent and special-purpose fly lines. The good news is that they all keep innovating, and every year seems to bring forth a handlful of upgrades for discriminating fly fishers. 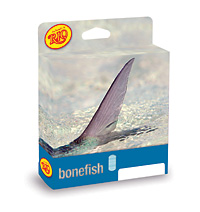 RIO's new "Bonefish" line is one of many 2009 saltwater lines that the company reformulated with new coatings, tapers and colors. Photo courtesy of RIO Products

For 2009, RIO Products decided to put a great deal of focus on re-formulating their saltwater lines based on intense field testing. As company president John Harder described it to us, groups of testers used the lines in the Keys and other hot-weather saltwater locations and went through several “double-blind” testing events, where no one knew which lines they were casting. Only when the observations matched up did RIO trust the results. The Tarpon, Saltwater, and Tropical F/I and I/I ($74.95) all sport new tapers, Agent X undercoats, welded loops on both ends, and new colors. There are some really clever taper designs in this group, including the combination of a dramatic front taper and long back taper on the Bonefish line, and the Redfish line’s combined short back taper and medium-length front taper for presenting flies to finicky reds. RIO’s brand new lines will include the Bonefish, Redfish, Carp, Density Compensated (DC) 10-Foot, Skagit Short, Outbound Short, Tropical Outbound Short, Mainstream Indicator, and Mainstream Spey. All of RIO’s 2009 trout lines are priced at $69.95. RIO will also introduce several new knotless tapered leaders in 2009, including the Indicator Leader, which has a short orange butt section, abrasion-resistant RIO Max Plus leaders, Steelhead/Salmon fluorocarbon leaders, a Surf leader, and Bonefish/Saltwater Fluorocarbon leaders. 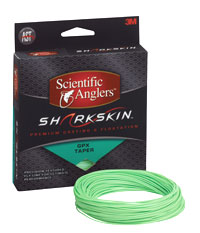 3M Scientific Anglers is spreading last year’s very popular new Sharkskin technology into company’s core lines, like the GPX General Presentation Taper, Steelhead Taper, Magnum Taper, and Magnum Taper (all $99.95). The company is also producing a brand new floating 120-foot Sharkskin Shooting Line($59.95) in both .032 and .035 diameters. SA has decided to replace Ultra lines with the new Supra series, which includes brand new Supra Floating and Supra Saltwater products ($49.95), as well as new Supra Sink Tip and Supra Skagit lines ($129.95). The Supra Floating lines come in sizes 2 through 9 and the Supra Saltwater will come in sizes 7 through 12, while the Sink Tip will be offered in WF5 – WF9 sizes and in both Type III and Type V sink rates. Supra Skagit lines will be available in sizes WF6 through WF10 and in a variety of grain weight designations. Also in 2009, Air Cel Supreme 2 lines will be replaced by the Professional series, which will now also include a new Sink Tip line for streamers and wet flies. In the leaders and tippets category, SA will use an advanced clear polymer in a whole new range of premium tapered leaders ($3.49-4.25) as well as new Bite Guard leaders ($6.95) for toothy fish. 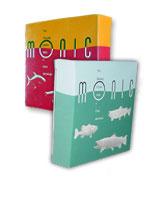 Keys tarpon angler David Dalu winning all three major tournaments this year with Monic lines in his arsenal helped this fast-growing company secure their place as a leading producer of stealth lines. For 2009, Monic is in the midst of extensive testing of a new coating, using a brand new polymer, for their clear tropical lines. They believe the new coating with perform significantly better, shooting farther and staying less “sticky” in high-temperature conditions.