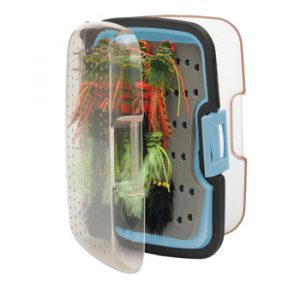 3M SCIENTIFIC ANGLERS will completely replace its System X series of fly boxes in 2009 with a well-conceived line of Waterproof Fly Boxes that range in price from $22.95 to $31.95 depending on size. Eight different sizes and styles featuring slit-foam fly holders, water-tight seals and see-through clear cases (with a clever “nub” pattern to help prevent scratching) are a creative new direction for SA. We examined these boxes closely at the FFR show and were impressed by a few key features: the tapered rubber gasket seal, the streamlined latches and thin profiles, and an intelligent angled-insert model that makes it possible to add large flies without making the box thicker. As with the System X series, fly inserts in all the waterproof boxes are still interchangeable.

The very popular C&F Designs fly boxes will be joined by three new mid-sized boxes: the Specialized (CFSP-2500 & CFSP-2533, $49.95) and medium System boxes (FFSM-1, $34.95). The new Specialized box styles offer the choice between single thick slit-foam or three-strip slit foam storage options and join the rest of C&F’s line of waterproof boxes. The new medium System box, the FFSM-1, offers the same spring-loaded clip insert system as their previous small and large sizes, and is also waterproof. The third box, the CF-1401 Tube Fly Box ($49.95), has four long compartments for tube flies up to 3″ long and a magnetic see-through lid. The lid also has three rows of micro-slit foam that will hold trebles, doubles and single hooks securely. 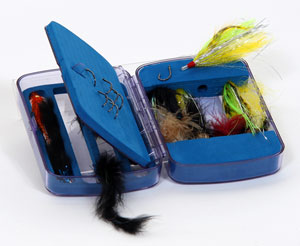 The 2009 line-up for Cliff Outdoors is headlined by two boxes, the Justin Case™ and the The Swinger™. The bigger Justin Case ($98) is a 13′ x10.5″ x 4.5″ bomb-proof waterproof case that utilizes the same slit-foam fly holding system as Cliff’s popular Bugger Beast. This is the box you want to tote around your big collection of irreplaceable flies in tough conditions. The Swinger ($24) is the company’s new box designed specifically for streamer and tube flies. The 6″ x 4″ x 1 3/4″ polycarbonate box features unique gripper holes for tube flies and plenty of storage for stringer leeches. All Cliff Outdoors boxes are among the toughest fly boxes we’ve ever used. And that’s a good thing given the amount of flies we typically pack into each one. 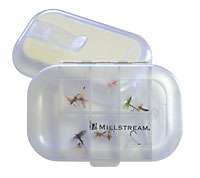 Mill Stream's new compartmented clip-on box makes a lot of sense for those who want quick access to their flies. Photo courtesy of Mill Stream

At the FFR show, Mill Stream came out with a new version of the clip-on fly box they introduced at the 2007 show. The new MSB-658, a compartmented addition to the ripple-foam, see-through MSB-650 series, clips directly to waders, belts, pockets or vests. All the 650s have full-length brass hinge pins, a secure but easy-to-use latch, and a rounded ergonomic design. The 6″ x 3.75″ x 1″ boxes — all U.S.-made — ship with the optional belt clip inside so anglers have a choice of whether or not they wish to use it. 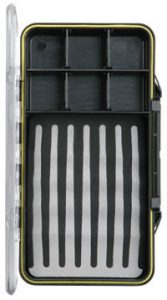 Flambeau showed up in Denver this fall with some smart new waterproof fly boxes of their own. Their new Crystal Creek boxes feature clear lids and a 360-degree rubber gasket, as well as a configurable layout. The new box also features something quite clever: instead of using a single tone for the slit foam liners, they used two-color inserts to show exactly where the slits are — a surprisingly useful feature that they also use in their new large Fly Locker ($48.83-59.85). Flambeau’s double-sided Blue Ribbon Waterproof Twins ($37.79) come with clear lids and use rows of vertically slit foam that are designed to prevent the hook point to pierce the foam. They use the same “Vertical Friction Foam” in their new Blue Ribbon Waterproof Swing-Leaf Fly Boxes ($27.75-46.68). “The idea is basically that the foam will last a lot longer,” said the Flambeau rep.