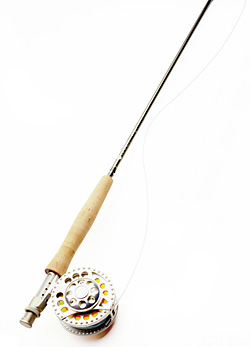 Hardy's attractive new Angel 2 series is clearly aimed at the upscale U.S. market, with a price tag of $949-1,150. Photo courtesy of Hardy and Grey's

THE NEW FLY RODS for 2009 include a trend toward shorter, stouter construction for warmwater and light saltwater applications. The G.Loomis Shorestalker series is a good example. With Hardy and Grey’s marketing directly to the U.S. now (they ended their Cortland relationship this year), don’t be surprised to see more competition in the higher end market and even the mid-range, since they’re bringing the full range of SKUs from overseas. This year Sage replaces the premium TCR line with the lighter and slightly more expensive TCX line of rods. But for the most part rod makers seem content to improve on existing designs and if anything are moving backwards a bit towards “slower” actions.

The first example is Orvis‘s decision to begin building 11- and 12-weight rods in their ZG Helios line. We cast these super-light rods at the show and were impressed by their ability to hold lots of line in the air and still have plenty of tip control. The 12-weight Helios weighs only 5 1/4 ounces, making it lighter than many 9-weight rods on the market, and the 11 weighs only 4 3/8 ounces. Both of these rods become available in November 2008 and will retail for $795. Orvis is also extending their freshwater line, building six new “Tip Flex” models in weights 3-6 and three new “Mid Flex” models, including a new 3-weight that weighs 1 3/4 ounces. Finally, Orvis introduces a brand new Helios Lightweight Series for 2009 — the Ion — aimed at those who appreciate small-stream trout fishing with ultra-light rods. While all of the rods in this series weigh 1 3/4 ounces or less, the 2-weight weighs an incredible 7/8 of an ounce. All the new freshwater Helios rods will cost $775, except for the new Superfine Trout Bum One-Weight, which costs $575.

Orvis is taking Helios technology into their small-stream fly rods in 2009 with the introduction of the Ion, which will come in one- through five-weight sizes. Photo courtesy of G.Loomis

Sage has replaced the fast-action TCR series with a new, lighter TCX series of fly rods ($780-820) that uses weight-reducing G5 technology. (As Sage rod designer Jerry Siem says, “It’s not what you put into a rod, it’s what you take out of it.”) The new are 12-15% lighter than their TCR counterparts and just as importantly are slightly slower. The TCXs are colored a quite attractive “kryptonite” greenish-gray. Sage also hopes to mimic the success of last year’s sub-eight-foot Bass rod with a smaller cousin, the 230G Bluegill — for, you guessed it, panfish ($199). As with the Bass rod, Sage has designed their own new fly line specifically for the lighter version. Finally the updated “Flight” series, in the mid-$200 to low-$300 price range, replaces the previous year’s “FLi” series.

Redington has a new CPX series of fly rods for 2009, ranging in price from $299 (smaller rods) to $399 (spey versions). The new models, designed to be not quite as fast as the old SS series, feature Pac-Bay TCH stripping and hard-chromed snake guides, woven graphite reel seats and nifty machined hidden hook keepers in the saltwater versions. Models in this line include 4-piece 3- thru 6-weights, salt-specific 4-piece 6- thru 12-weights, 4-piece 5- thru 8-weight switch rods, and 4-piece spey rods, along with a couple of 2-piece rod models (thank goodness folks are still making 2-piece rods). Redington also has a new shorter “Predator” series of 4-piece fly rods in line weights 6, 8, 9 and 10. The 6- and 8-weight are 7′ 10″, and the 9- and 10-weight are 8′ 3″ — ideal for turning over big flies in tight conditions. All Predator models are $199.

With direct U.S. distribution for their entire inventory this year, Hardy and Grey's brings lots of new fly rods from overseas, including the very popular, moderately priced G-Tech rods. Photo courtesy of Hardy and Greys

Hardy and Grey’s is bringing out a new Angel 2 series of fly rods that range in price from $949 to $1299 for single-handed rods, and $1699 to $1999 for two-handers. These light-gray (grey, if you like) rods were hands-down some of the prettiest rods at the show and sported all top-end components. But perhaps most importantly Hardy and Grey’s has brought their entire range of products — including their very popular G-Tec series rods ($350-420 for the single-handed and $450-500 for the double) — to the U.S. for the first time this year. It will be very interesting to see if direct involvement in local distribution will get U.S. fly fishers more interesting in European designs.

Temple Fork Outfitters (TFO) is offering more “multi-task” 11-foot switch rods designed by Mike Kinney and Bob Meiser ($325-350). The new rods are part of their Deer Creek Switch Rod Series. The designers say their increased use of “helical” wraps on the new blanks will greatly increase strength while reducing weight.

St. Croix revives the "Imperial" brand in 2009 with faster tapers, lighter weights and higher-end components — all for $150-200. Photo courtesy of St. Croix Rods

Three years ago St. Croix dropped the Imperial brand name from their product list, but in 2009 it will return as an entirely new line of faster fly rods with new tapers and new technology. The new “Gloss Burgundy” Imperial rods — mostly 4-piecers but with a selection of 2-piece models — will retail for only $150-200 and will come in 25 different models, ranging from a 6′ 2-weight to a husky 9′ 10 -weight.