A Distant Note of Sadness 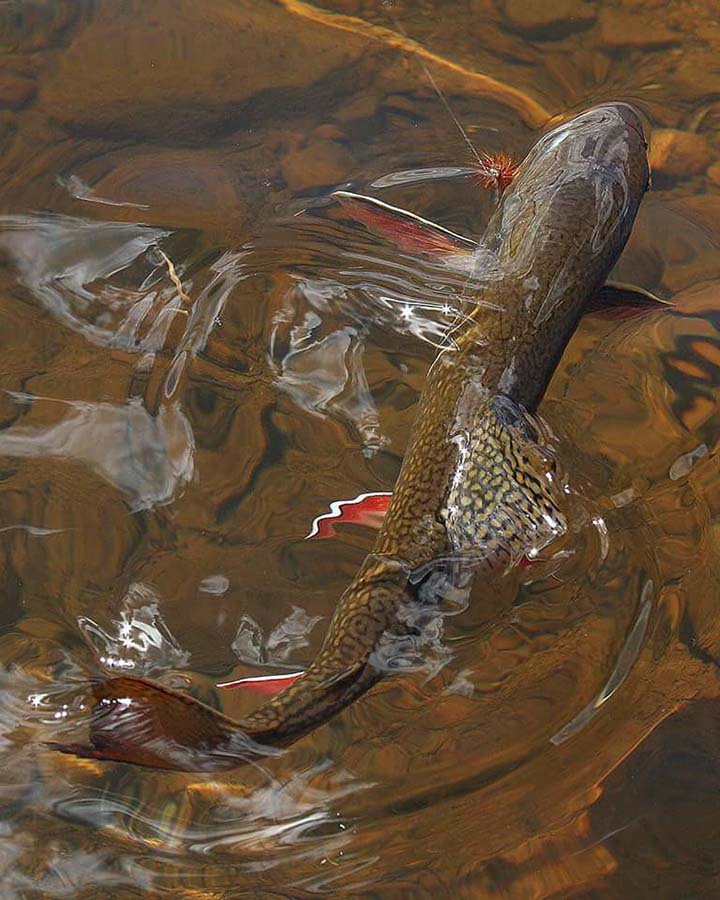 An unsullied creek is a rare thing, and an unsullied creek with brook trout much rarer. For most of North America, at least east of the Mississippi, brook trout are the original trout. For thousands of years they have adapted to the cold, clean waters of spring creeks. In the bluff and valley country of western Wisconsin, rainwater percolates and is chilled and purified through limestone rock, or karst. This is the same rock that is exposed in the beautiful vertical faces of high bluffs.

It’s a great pleasure, almost the greatest pleasure to fish beneath these bluffs, to throw a dry fly under a canopy of cottonwoods. The canopy keeps the grass down and inhibits the growth of the watercress and coontail that can snag a fly. By positioning yourself at the foot of a broad pool with a little foliage behind to obscure your profile you can drift a tiny Hendrickson over submerged boulders for as long as the pleasure possesses you, not really caring if it brings a fish or not, a sort of dream fishing that has more to do with being there than catching fish. Like drinking wine with a beautiful woman, time slows down. Time is meaningless.

Brook trout can’t tolerate most water. They won’t be found in creeks that are just fine for brown and rainbow trout. It has to be cold, ice-cold, and clear. Luckily, the bluffland has this water.

The farming in karst country is narrow-gauge farming with limited tillage between bluff and creek. To prevent erosion, the creek must have a buffer of trees and heavy vegetation. The farmer has to work on a small scale. He has a maximum of fifty or sixty rows (or often only seven or eight) for crops like soybeans and corn. Next to the creek he leaves a buffer untilled, otherwise, the banks would progressively collapse, eating into what little field he has. The plain then floods again and again, the whole thing becoming a muddy untamable mess.

What is responsible for the health of the farmland is also responsible for the health of the creek. You almost can’t believe these fortuitous circumstances exist. Giant swallowtail butterflies, dusky blue and six inches across do their slow-motion dance among ash trees. The pileated woodpecker, big as a crow and sporting an outrageous flaming crest, calls from hardwood depths, the cack-cack-cack sounding like something out of the Amazon rain forest. There are great blue herons and brook trout and rare flowers and valley ferns and wild raspberries and water so pure you can drink right out of the creek (although I wouldn’t suggest it south of the beaver dam). A lucky combination of requirements.

There were once spring creeks and brook trout throughout the Midwest, but with a zeal that can only be compared to war men tore into the forest and prairie and gutted the wetlands. Coldwater springs were dredged and ditched, and the ancient watercourses made ramrod straight. Rainwater runs off in filthy culverts and corrugated pipes to the river. I fear the same is coming to our karst country. It’s just a matter of time. I don’t think the current generation will do it, and I have a great respect for the farmer, but someday prices will rise so dramatically that his kin will be forced to sell. Then it will be over.

With enough science and equipment the Big Boys will figure out how to tame these valleys. They will expand the cropland, straighten the creeks and warm the water, killing the trout and making way for some really big money. Compared to the really big money and the grand ambitions of men, a trout or butterfly is a very small thing.

I love fly fishing, but it carries with it this distant note of sadness. Hemingway once said that all love affairs must end tragically. In the end someone is left alone, even if through death. There is no other way. I wonder if that’s what awaits these creeks and forests and ancient bluffs. A slow or mercifully quick death.

So you try not to think about it, and instead throw another cast at a trout, and smile at the high, almost feminine cry of an eagle.

Maybe I’m too pessimistic. Maybe with the growth in fly fishing a younger, more sophisticated generation of environmentalists will step in. But it seems all the young people are in cities making money.

That’s what I was doing, too, when I was their age. They’ll be sorry.

So I sit on my porch after a few hours fishing for brook trout. I moved here for a reason, after all. The sun is low. I drink wine with my wife, and later we might go to dinner at the little bar and grill or maybe not. I’ll think of a joke, savor her eyes, and tell her how enduringly beautiful she is. The challenge and pleasure is not dissimilar to fishing. This is not an item you want to tell her.