“Bend in the River” 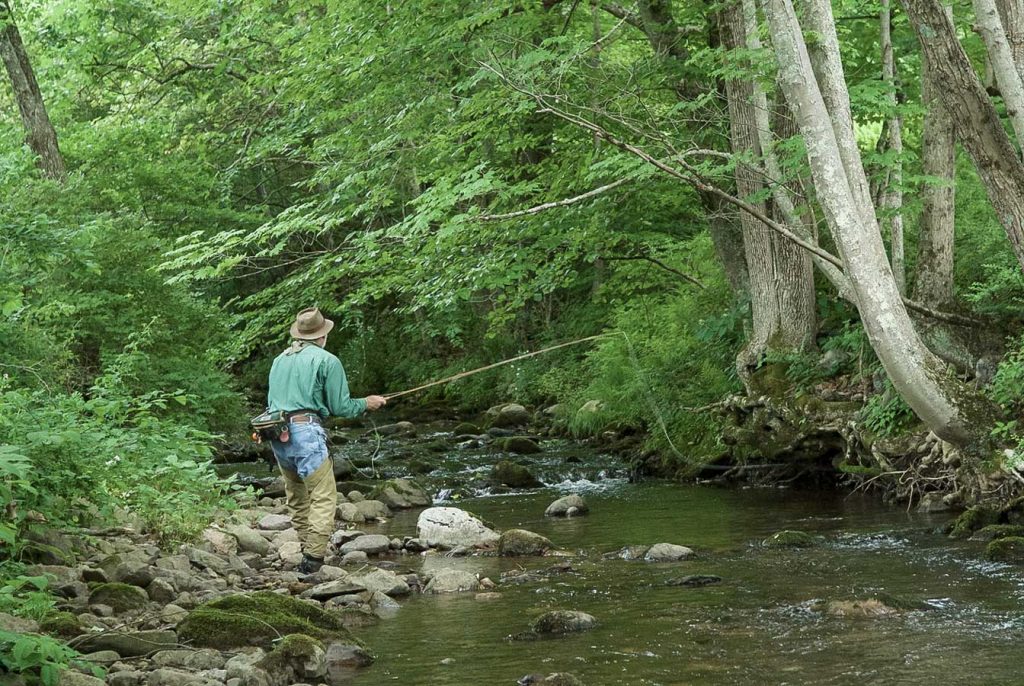 Seated on a log beside my favorite stream, cushioned by moss that has crept across the bark, I wonder why it is that I tend to gravitate toward these little ribbons of water. Although the sun shines brightly on this afternoon in late September, it’s lost most of its heat. The leaves are turning the distant hills into an autumn palette. The brook trout that I’ve been teasing with a wet fly over the last few hours are also decked out in their autumnal attire: flaming bellies of golden orange, dark backs, and red-in-blue dots along the flanks—the reason old-timers call them speckled trout. These are small fish, the largest fitting snugly in my palm. Like me, they prefer the solitude of the deep forest to larger rivers that are more readily accessible.

A number of years back, Trish and I spent two weeks along the western coast of Ireland. Our daughter had spent a semester at the Burren College of Art in County Clare, and we’d traveled there to fetch her home. The plan had been to tour the countryside. While the ladies snapped pictures of an Abbey built for the Augustinians in 1120, l unpacked my fly rod.

Located in County Mayo, the village of Cong is where The Quiet Man was filmed. For many of us who grew up in the States during the 1950s, this movie, starring John Wayne and Maureen O’Hara, remains synonymous with St. Patrick’s Day. Now, I must be getting old because back home there wasn’t a single person in my office who’d heard of The Quiet Man.

“John Wayne? Wasn’t he that guy who played a cowboy?” my secretary replied when asked if she knew of the movie.

On that day, the wind had picked up by the time we took the turn at a wooden sign with the words QUIET MAN BRIDGE painted on it. Above the little stone bridge was a slow-moving stream surrounded by a wild marsh of grassy hummocks. Below, the current quickened as it flowed through the bridge’s stone arches.

After tramping through tall reeds, I stood where more than sixty years ago Barry Fitzgerald carried John Wayne to his ancestral home on the back of a one-horse cart. I was about to cast a tiny pheasant-tail nymph into the current, when an old man humped over the muddy lane that led down from his white-washed farmhouse. His threadbare coat was buttoned to his chin, his hands sunk deep in its pockets. Wisps of white hair danced around the wide-brimmed hat he wore low on his brow while a cigarette dangled from the corner of his mouth. By his side, a dog of unknown origin snarled until the old man kicked him with a rubber boot.

“Tell me boyo, what might you be doin’?” He spoke without removing the cigarette from between his lips.

“I was hoping to catch one of your Irish browns to write home about,” I replied.

“Meant no harm.” I gave him my best smile.

“Guess I’ll leave you to it,” he replied. Turning his back, he called to the dog that had continued to stare with bad intention.

I spent my final few nights listening to “trad” music in the pubs we found along the road and my days searching out streams that flowed under the shadows cast by the “Twelve Bens,” a series of mountains in Connemara that Oscar Wilde described as “a savage beauty.” I did so, not so much to catch fish, but to stand near the places where they were found.

Voelker lived in the Upper Peninsula of Michigan, a part of the country where the rivers and rills are as wild as those found along the western coast of Ireland and as untamed as any flowing out of the mountains that separate Maine from its northern neighbor.

If you don’t remember The Quiet Man, you probably won’t recall Anatomy of a Murder. Based upon the novel written by Voelker, this intense movie, starring Jimmy Stewart as a mild-mannered, fly-fishing, defense attorney, was also filmed in the 1950s. The money Voelker made from the film allowed him to spend the remainder of his days on trout streams that he preferred to the courtroom where he’d practiced law, first as an attorney and later as a judge.

I first discovered Voelker a few years after graduating from college. He’d written a wonderful book of stories entitled Trout Madness under the pen name of Robert Traver. It inspired me to purchase my first fly rod—a cheap fiberglass model manufactured by the Cortland Company. A number of years later, I, too, became an attorney, and even wrote my own book of stories. I now own a number of fly rods, most constructed of graphite, a few from bamboo, while the Cortland, with its chipped paint and frayed wraps, rests comfortably on the wall of my den.

On the six-and-a-half-hour flight home from Ireland, I thought of The Intruder, a Voelker tale found in Trout Madness about a stranger who unexpectedly shows up at the angler’s favorite pool. You’ll have to read it to see why the times, they apparently are not changing. Upon my return home, I took the book down from the shelf and reread it cover to cover.

Now, seated on this log, surrounded by the spruce and balsam of western Maine, listening to the timeless current pass by, I’m once again reminded of John Voelker, a.k.a. Robert Traver, who died in 1991, at the age of 88; and of my father, who at age 83 passed away after struggling for many years with a heart condition; and my uncle George, who joined him a few years later, a guy who couldn’t catch a fish if it leaped out of the water and into his arms, but who was the most enthusiastic angler I’ve had the pleasure to know. And of my best friend, Trish’s dad, who found it hard to release a trout he’d fooled fair and square, and who, later in life, after losing his sight, I’d entertain with tales of my western Maine adventures.

I remember that Irish farmer humping down the wind-slept lane to see what “a Yank” was up to, and all the other fellows, now in their 70s, 80s, and older, some still wandering rivers and streams, with backs stooped forward, leaning on wading staffs, their eyes still twinkling with mischief, their minds filled with a lifetime of memories.

I like to think of them, not as they were in those later years, but as young men filled with possibility.

Rising from my seat on this moss-covered log, I can see the next bend in the river. Perhaps that’s what’s best about a trout stream. There’s always one more bend to explore.