Inside the Box: Craig Mathews 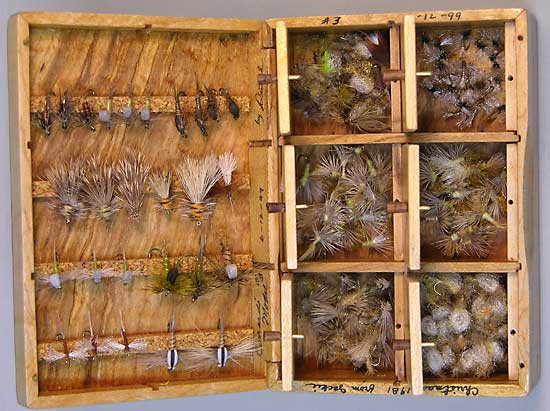 Craig Mathews's custom-made birdseye maple box contains a wide variety of flies that are river- and hatch-specific, as well as a few patterns — like Zelon midges and Iris Caddis — that are useful almost everywhere on Rocky Mountain waters.

“I’VE BEEN FLY FISHING for about 53 years now, and it’s funny how my fishing style has changed over the years. For the first twenty years, I was a dry-fly fanatic, then for ten years I became a nymphing maniac. After that I got really serious about surface-film and wet-fly fishing. But I came full circle and for about the past fifteen years I’ve fished dries whenever I can — there’s just something about watching fish take a surface fly that I can’t get out of my head.

This is a really wonderful box made for me by “Dutch” Schultz, who hand-crafts beautiful custom boxes for our store in West Yellowstone. It’s made of birdseye maple and is a replacement for a box that my wife Jackie gave me for Christmas in 1981. I lost the first box in one of my vests while fishing in 1998. This one has a little inscription inside the lid that mentions it is a “Conrad” style box: Dutch likes to name his boxes after the various friends who inspired them.

Before I even begin to describe the flies here, let me say that 95% of my fishing is done with Zelon Midges, Sparkle Duns, and X- and Iris Caddis. They all use Zelon, which you can’t buy anymore, but which is a great all purpose iridescent material that takes dye really well. When DuPont stopped making Zelon in 1984-85, I bought 586 pounds of it and put it in the store freezer, which is the only place we could lock it up. I took ten pounds of that and hid it in my house, just in case. Even though we are close to finding a replacement for Zelon, I don’t think I’ll ever run out. 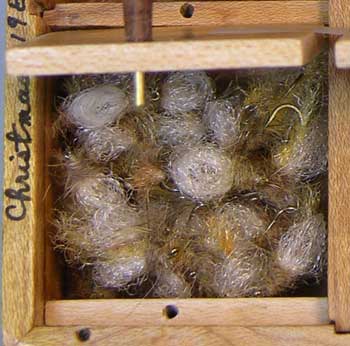 The left side, or top, of the box itself starts with a row of midges. The first three are Mother’s Day Caddis Soft-Hackles, which we just finished fishing on the Madison. Next are three Pale Morning Dun Foam Emergers, which I find are really effective in those places like Buffalo Ford and the Firehole where the fish won’t take a high-wing fly. Last are a few PMD nymphs that have a brown foam wing pad that keeps them near the surface; we find that in some spots on the lower Madison, for example, the brown trout are feeding only in the top 6 inches of the water column, and these nymphs drift right in that range.

The next row of flies starts with Hedgehogs and has a couple of Stimulators and a Goddard Caddis thrown in. The Hedgehogs are a great little yellow stonefly imitation that we came up with.

The third row starts with three Pale Morning Dun Hackle Spinners, which you’ll note have pale olive-green bodies. The reason is that the fish are keying on the female spinners, which are egg-bearing and provide a better meal. Next there are a couple of Green Drake Cripples and then a Green Drake Foam Emerger, flies we use on the Henry’s Fork and parts of the Yellowstone and the Madison when the fish are really selective.

At the bottom of the left side are three Rusty Sparkle Spinners, then two Gray Drake Spinners, which are used for very specific hatches on Slough Creek and Soda Butte in the park. We tie a lot of flies like these for hatches that have a “micro-distribution” at specific times on specific waters. For example, you could be fishing a PMD hatch on Slough Creek, and at the same time 100 yards downstream there are Gray Drakes coming off.

The right side of the box — actually its bottom — contains neat little compartments with pegged closures. It’s pretty amazing how Dutch makes these.

In the top left compartment, there are a bunch of “good luck” flies that were tied by many good friends who have since passed away: Dan Callahan, Charlie Brooks and others. That section — which also has some soft-hackle PMD emergers and X-Caddis 22s — sits right next to my heart when I am fishing.

On the top right are Zelon Midges along with some Baetis Stillborns, which I find I fish more and more in recent years. There just isn’t a place we fish where a midge isn’t an effective fly. I tried to stay away from midges for the first twenty years I fished, and now I use them almost every day.

In the second row, the left and right compartments both contain a variety of Sparkle Duns and Improved Sparkle Duns. The ‘Improved’ refers to the fact that we fact that we put a quail feather over the shuck. We use these flies in sizes 12 to 26 for just about any PMD or Epeorus or other light-colored hatches.

In the bottom row, the left compartment contains a bunch of X2- and X-Caddis, which have trailing shucks and imitate spent, crippled and stillborn flies. The bottom-left compartment contains almost all Iris Caddis, which is flat out our most effective emerging caddis pattern. It imitates the most important caddis in this area, thehydropshyche. The really wonderful thing about the Iris Caddis is that you can catch five or six fish on it and it looks the same as when you first tied it on.

When it comes right down to it, I want flies that I can tie in a couple of minutes and go fishing. That describes my fly choices more than anything else. The other day I taught an 82-year-old man how to tie a Zelon Midge and he took it out and caught a fish with it that very afternoon. That’s what it’s all about.”

You can read more about Craig Mathews’s fly choices on the Blue Ribbon Flies Web site. Mathews is also the co-founder, with Yvon Chouinard, of One Percent for the Planet, an alliance of businesses that donates 1% of their sales to environmental organizations worldwide. Mathews’s most recent publications are the newly released DVD “Fly Fishing the Madison River” (Yellowstone Media Group, 2007); the paperback version of his Western Fly-Fishing Strategies