Excerpt: “At the Lake House” 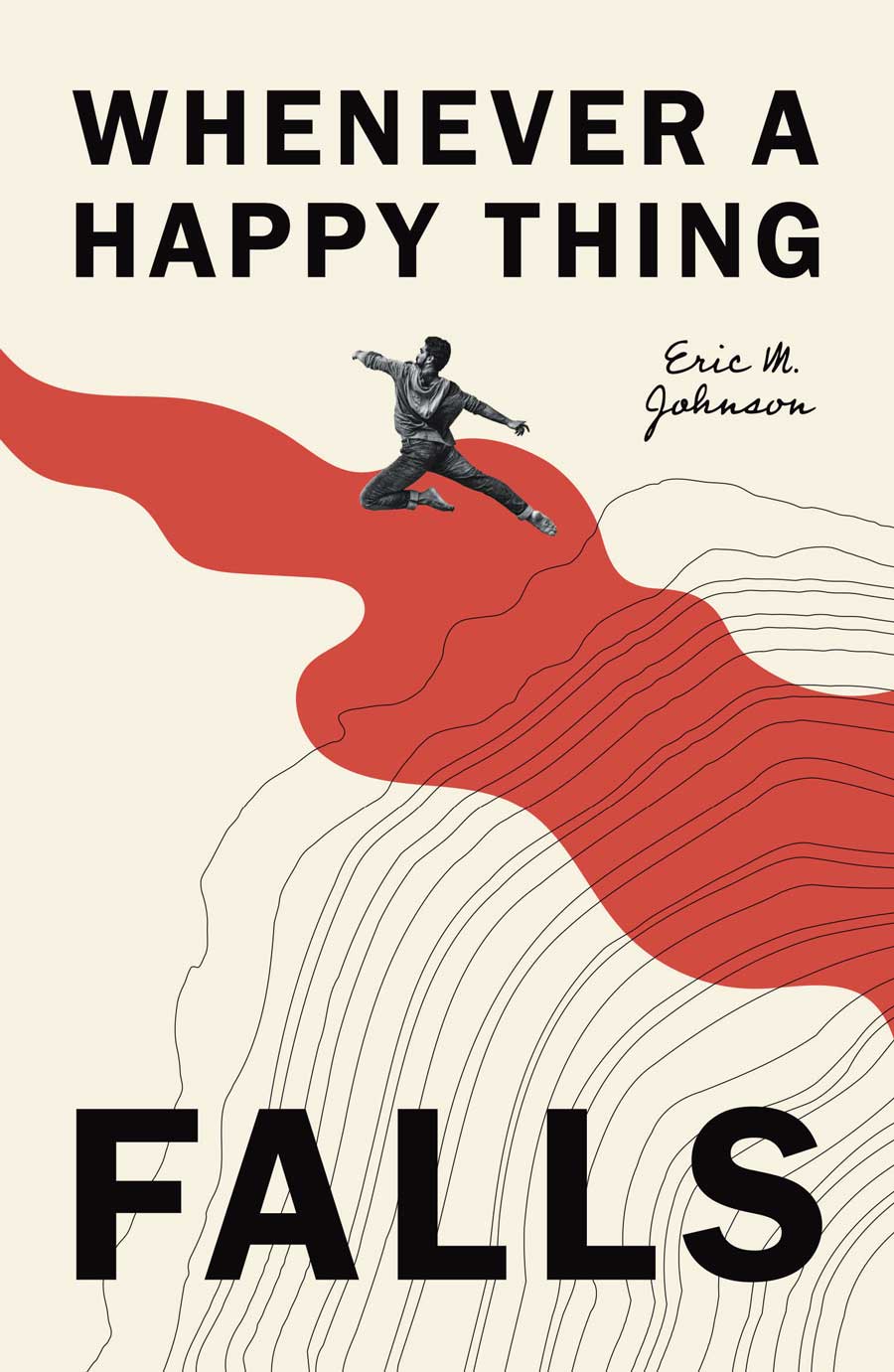 Buy “Whenever a Happy Thing Falls” by Eric Johnson

Imagine this. This final bit.

They were together, speeding, Sutton at the wheel. Their backs pressed into their seats as the car rose and fell along the wavelength of a crippled two lane highway, a hundred miles north of the town.

The car was filled with Bale’s endless cigarette smoke and bluegrass.

A disgusting ash covered the sky. Drizzle pelted the car and the semi-nude forests. Slicing in and out of the puce and sepia hillocks, Bale saw the rampage of river.

“What about the Scotch, Sutton?”

Sutton’s tongue pressed into his bottom lip as the engine roared and the road fell away from the wheels and their stomachs fell weightlessly until they connected with pavement and they lightly lurched. He shouted: “Eh?”

Sutton lifted his brow, gestured to the wheel, which Bale grabbed, and he dug down beneath his legs among crumpled newspaper pages, cigarette packs and empty coffee cups and exhumed a flask filled with 15-year-old Dalwhinnie pilfered from Bruce’s liquor cabinet.

Bale took a swallow and watched the river gradually bend away from the road and disappear into the depths of the forest descending into the valley.

He knew every bend of that river—that behind the trees it roared down a series of curves, abutted a limestone wall for nearly a quarter mile, and then opened into a wide, deep pool famous for holding steel
head.

“Take a left at the dirt road a quarter mile up,” Bale shouted.

They drove down in the relative darkness until the road became dirt and ended a short walk to the river’s edge. They ambled out of the car.

“It is goddamn fucking cold,” Sutton said as they strung up their rods and he pulled on Bruce’s waders. “What, did Zane Grey skip the winter run on the Rogue because of a little sleet?” Bale said. Sutton shivered. Wiped rain from his face.

They took their packs and rods and the flask and set off down a narrow tractor path toward the river. Sutton saw the autumnal frost where it paralyzed the naked canopy and smelled the pine musk and hearth fires and heard the crunch and crack of gravel and snapping twigs under their boots. A young whitetail bounded from a creek bed. Mergansers lit out from a stagnant back eddy.

Bale’s lungs lumbered, his limbs ached, the liquor dulled his mind. He tried to remember the last time he was sober.

They sidestepped down a hill to the edge of a turquoise riffle, which bent into a wide pool before disappearing into the fog.

Bale started telling Sutton for perhaps the hundredth time how this pool was famous for holding the biggest steelhead ever landed in Michigan, a feat accomplished in late December 1943 by a farmer named Dominic Plume, who used the equivalent of a broom stick to swing a magenta stack of feathers wrapped around a hook into the stout jaw of the giant buck.

It took Plume nearly 15 minutes to reel it in— though that fight, and the fish’s 26 pounds, seemed to get longer every year the story is told.

“Thankfully fishing has nothing to do with facts,” Bale said.

Bale would take the upstream section and Sutton would work downstream.

By memory, he located the row of massive sub merged boulders that dotted the river’s swollen middle and started out toward them.

Bale was studying the water with a look of absolute serenity, the wrinkles gone from his forehead, his eyes squinting hopefully.

“What are you going to do?” Sutton said.

Bale gestured above the pool.

“Say you don’t go back. What are you going to do with yourself?”

Bale thought of the half dozen driving hours be tween the river and his city apartment. His real life started to come back to him: his freshly starched shirts hanging chromatically in the closet, the smell of ear ly-morning coffee filling the musty cab while he scrolled through emails on his iPhone, the feel of the office’s cropped carpeting on his polished wingtips, his dust less desk smelling of Lysol, the ball of his palm wresting on a luxurious keyboard pad proudly displaying the golden Goldman & Coli logo.

He thought of the emails accumulating in the purgatory of his powered-down iPhone, lying idle back at the house.

He watched the river flow. A smile came to his face. One that wasn’t alcoholic or perverse or avaricious—just sweet, toothy, and juvenile.

Bale marched off and waded into the river. Sutton meandered down the rocky shoreline to his patch of water.

Bale felt the water’s coldness push against his waist. He pushed his glasses higher against his nose’s ridge, careful not to push too hard on his disabled nose and eye patch, and stripped line off the reel and began his cast. His cast wasn’t terrible.

He mended the line. The fly dove through the water column and swung toward the bank until it was straight below him some 60 feet. He stripped in the line, took a giant step downstream, and cast again.

Bale easily ignored the fatter droplets of water pounding into them and the cold eating at his fingertips and his legs hardening into concrete in his waders.

A storm danced like a colossal apparition above the tree line. A fog thickened over the foothills and forest. Cast, mend, swing, strip, step.

His heart quickened when he mistook a snagged rock for a fish’s strike. He shook the hook free, reeled in, exhaled.

He stepped deeper into the current; the water tickled the base of his ribs. He stepped downstream. Shot line. The casts felt better, smoother.

Up the valley, a peal of thunder exploded. Bale felt a big strike, but the fish wasn’t hooked. His adrenaline surged.

“That was a big fish,” he said, clicking his cheek. He imagined the steelhead, its belly nearly rubbing the gravel bottom, his tail whipping in the current behind a submerged bolder.

Bale dug in his chest pocket for the flask and vacuumed up the last ounce. He adjusted his hat and pulled the hood’s drawstrings tighter to keep out the rain. He stepped deeper into the current, the water lapping against his chest pocket, and held his arms above the current. He stumbled a bit as he began his back cast and watched his line soar beyond the rod tip in a tight loop.

But, as he watched his line shoot across the river, he caught the sudden terrifying glimpse of a hulking mass spinning toward him upriver. It was a massive spruce trunk twirling in the current after being dis
lodged by the storm.

He could try to rush the thirty feet to shore but knew he wouldn’t make it, his numbed feet like cinder blocks. He could attempt to dive under it, which would fill his waders with freezing water, and he could not judge how deep he would have to swim to avoid getting nailed by the trunk or its spinning branches—what if they smashed his head or hooked him underwater?

Sutton, hundreds of feet away, saw Bale freeze and then the trunk and started screaming for him, taking hulking strides through the water to get back to shore.

The tree struck Bale in the chest, and he latched onto it, and was carried out into the pool. Maybe a jug’s worth of icy water poured into the tops of his waders and the added weight caused his numbed fingers to slip off the slick twirling bark.

His flailing arms pumped acid as the current tumbled over his face, the world disappearing into a spinning blackness.

His head had smacked the corner of a submerged bolder. Blood flitted into the water. The trunk nudged past him where a riffle sucked it into a speedier braid of current. It turned sideways and crashed into the bank, leaving his body suspended underwater at the edge of the teal pool.

Sutton had already shed his waders and dove into the river after him, ignoring the likelihood of his own death, and after a half minute had wrapped his arms around Bale’s body and yanked him to the surface and over to the riverbank.

When Sutton looked down at him, Bale’s skin appeared sallow. His bloodied head lay slumped against the shore stones. His eyes were vacant.

The wind and rain beat down upon them as Sutton drove his interlaced fingers into his friend’s chest and yelled his name, hearing nothing back but lifeless silence.