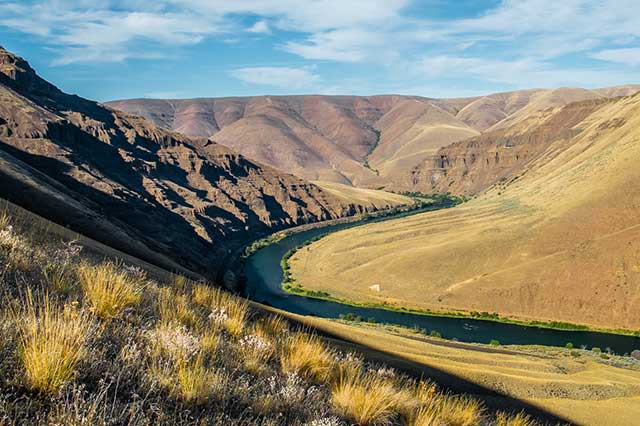 As I write in early June, the famed salmon fly hatch on the Deschutes River is all but done.  Some days the fishing was absolutely silly; others, the bugs (and fish) seemed to be taking a break.  Either way, anglers swarm to the section of river near the town of Warm Springs from Portland, roughly 100 miles away, and points much further afield, drawn by the opportunity for big fly/big fish fun.

The salmon fly emergence used to reach its apex around Warm Springs in early to mid-June.  The last few years have found the hatch – which is triggered by water temperatures reaching the low 50s – peaking in the third and fourth weeks of May.  A modest change, perhaps, requiring some shuffling of guide schedules and airline reservations.  But many believe the accelerated hatch points to a series of unsettling issues for the Deschutes.

“We’ve definitely seen the timing of hatches changing as water temperatures have fluctuated,” said Damien Nurre, co-owner of Deep Canyon Outfitters, which operates both single and multi-day trips on the Deschutes.  “But the invertebrate biomass has also been changing.  We’re seeing very few mayflies.  We fished a PMD hatch the other day, the best in several years.  But it was still paltry relative to past mayfly emergences, done in 15 minutes.  Caddis hatches are also diminished.  And we aren’t seeing any craneflies at all.” 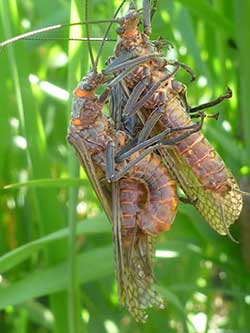 Guides and other Deschutes habitués began sensing something was different in July of 2010.  Anglers in the lower reaches of the Deschutes (near its confluence with the Columbia ) noticed that fewer “early” steelhead were showing up in the river.  Sparser insect hatches, increased turbidity and the emergence of new types of algae followed in subsequent years.  Changes coincided with the introduction of new water release protocols at Pelton Round Butte Dam, the impoundment that releases water into the lower Deschutes.  The revised water releases were authorized to meet two mandates:

1)      Adjust water released into the lower Deschutes to its natural thermal potential—that is, the temperature that would occur below the dam complex if the reservoir did not exist

2)      Facilitate passage of reintroduced anadromous fish (including Chinook salmon) from the Metolius, Crooked and Middle Deschutes Rivers  to a collection facility at the dam by creating surface currents

To create the new release protocols, a $90 million “selective water withdrawal” tower was built behind the dam to “mix” water from the top and bottom.  Essentially, the tower mixes water from different levels of the reservoir to arrive at release temperatures closer to pre-dam levels.

“I came upon a notice for a meeting about the changing river conditions,” said Greg McMillan, a passionate Deschutes angler who resides in Bend.  “I attended the presentation which was given by Don Ratliff, a senior biologist with Portland General Electric [which owns 2/3 of the Pelton Round Butte Dam; the other 1/3 is owned by the Confederated Tribes of the Warm Springs Reservation of Oregon].  I left more confused than when the meeting started.  I decided to organize a second presentation so Don would have more time to present his understanding of the situation, and guides, outfitters and other stakeholders would have more time to ask questions.  This second meeting led to more meetings as we tried to determine what was going on.  It wasn’t just the water temperature that had changed, but the water chemistry.  The Deschutes River Alliance was born of these meetings.”  (McMillan now serves as the non-profit’s Director of Science and Conservation and President of the Board of Directors.) 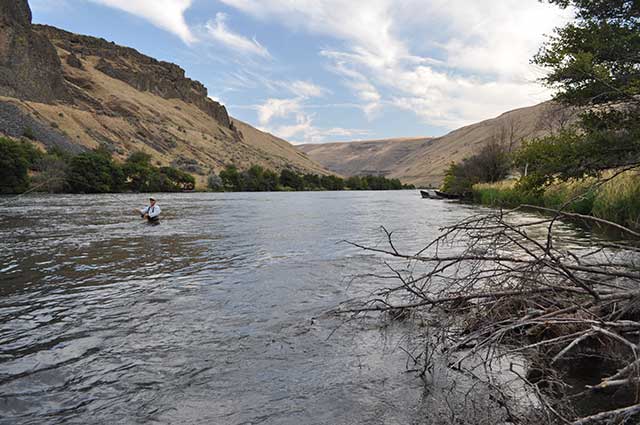 Most of the Deschutes’ stakeholders conjectured that the perceived temperature and chemistry changes they were seeing on their home river were the result of the changing water releases.  But to compel the owners of the dam and the various state and federal regulatory agencies overseeing its operation to take meaningful action, these perceptions of change needed to be quantified as hard science.  The main goal of the Deschutes River Alliance is to orchestrate and underwrite the science needed to make the case to the powers that be.  High priority projects for 2014 include:

“We’ve been fortunate enough to enlist the support of some very talented scientists,” said David Moskowitz, Executive Director of the Deschutes River Alliance.  “Our advisors include Rick Hafele, a former aquatic biologist for the Oregon Department of Environmental Quality, Larry Marxer, Oregon’s former chief water quality expert, and Steve Pribyl, a former Oregon Department of Fish & Wildlife fish biologist who has worked on the Deschutes for 25 years.”

A small sample size report collated from 2013 stream survey forms collected from Deschutes guides reinforce the perception of diminishing insect populations and increasing presence of cymbella mexicana algae.  But stakeholders are eager to review the hard evidence.  “By this fall, we’ll have scientifically valid data collected regarding the status of macroinvertebrates in the river,” said John Hazel, co-owner of Deschutes Angler Fly Shop and Guide Service and noted spey casting expert.  “The thermal area imaging study, in particular, will shed light on the source of the warmer water temperatures.  Who knows – maybe it’s not the dam.  But with the work the DRA is doing, we’ll make damn sure we get the real answers.”