The Karma of Broken Trailers 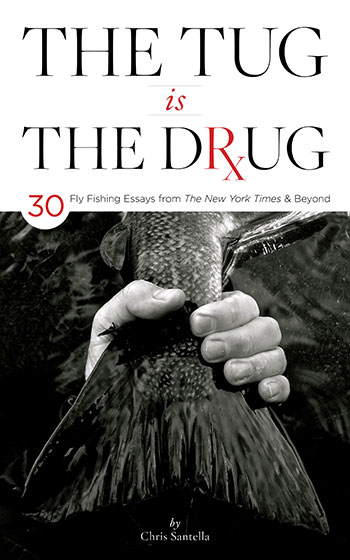 Buy “The Tug Is The Drug” by Chris Santella on Amazon

Every generation or so, the subject of paving the Deschutes River access road from Sherars Falls to Mack’s Canyon is brought up for discussion. The notion is always quickly shot down, with the guide community leading the charge. “The crowds will be unbearable on an already crowded river,” is the sentiment. Prospects for a paved road are tabled for another 10 or 20 years, and some of its opponents proceed to drive the roughly 17-mile stretch at twice the posted speed limit—especially during the steelhead season—leaving the already marginal gravel road a washboard hell.

One that can be very hard on trailers.

I own a one-third share of a drift boat, and consequently am sometimes asked to donate a trip for a school auction or assist friends with overflow guests. One weekend last September, I was slated for two such trips, back-to-back, both floating from the Beavertail campground to Mack’s. Prior to the adventure, I had my tires rotated and checked, knowing the travails that waited. I picked up the boat from my friend’s driveway and proceeded to Maupin.

At 4:30 the next morning, my friend (and his sturdy Tacoma Supercab) began the drive north to Beavertail. When we left the paved road at Sherars, my Subaru was engulfed in his dust; but soon his taillights were out of sight. That’s because I drive very slow on the access road, hoping to get my rig down and back in one piece. There was a blush of pink above the rimrock as I descended from the road to Beavertail. Reaching the bottom, I could see my friends at the put-in, wadered up and waiting. I circled the campground and rounded the final bend to approach the put-in. As my wheels straightened, there was an abrupt thud. I stopped, expecting I’d hung up on a rogue rock or popped one of my recently rotated tires. My eyes drifted to my passenger-side mirror. There, I spied one of my trailer tires rolling toward some brush. Its slow revolutions, with a woozy wobble and finally a dramatic leftward flop, had a cartoon quality about it. I found myself snickering, even though I sensed that the parting of the wheel from the trailer’s axle had ended my fishing day, and would likely pose other hardships.

I turned off the car, rolled the wheel from the brush back to the trailer, and looked at the axle. I’m not mechanically inclined, but even a cursory glance in the half light of the canyon made it quite apparent that I’d be needing professional assistance. The hub was gone, and the odds of finding it somewhere between here and Sherars seemed less than low. I walked to the put-in to alert my party that they’d be going it alone, and returned to the trailer. For a good 10 minutes I stared at the axle, hoping that I could reattach the wheel through some force of will. This failed. My friends waved as they floated downstream.

There’s no cell reception to speak of at the Beavertail launch, and I’d be adding insult to injury if I got stuck with a shuttle fee for a shuttle that would not happen. So I detached my crippled trailer and drove back up to the access road. A few miles toward Maupin I found coverage and left my shuttle driver a message. Part of me wanted to keep driving and leave the trailer to heal itself.

Some campers in Beavertail were beginning to stir, but lacking a flatbed, I doubted that they could offer much more than sympathy. Then I recalled that Beavertail had a camp host—and the camp host, Chris, was the wife of a steelhead guide I knew. As I approached the camp, Hawkeye (the guide) was making coffee; he had just come off a trip from Mack’s to the Mouth. He fixed me a cup and I explained my quandary. “Chris will call Barnett’s for you when she wakes up,” Hawkeye said with a reassuring grin. “This isn’t the first time a trailer has gone bust down here.” Another cup of coffee and Chris was up. Soon she walking around the campground with an antennalike apparatus affixed to her cell phone to get coverage. She was smiling when she returned. “George has one emergency to take care of, but he will be down in about three hours,” she reported.

Hawkeye put another pot of coffee on (and then another), heated up some pop ’n fresh cinnamon rolls, and we waited. We chatted about the current steelhead season (okay), the previous season (very good), and future seasons (hopeful). The cool of dawn gave way to the pleasant warmth of midmorning. After the fifth pot of coffee, the rumble of the flatbed could be heard. Soon the wounded trailer and its cargo was loaded on the flatbed. I extended Chris and Hawkeye a heartfelt thanks and followed George the 17-odd miles back to Maupin.

Back in Maupin, George assessed the situation. “Your wheel’s okay, the axle is okay. You just need a new hub to hold everything on. I’m gonna have lunch, and then I’ll get on it. Should be a few hours.” That didn’t seem too bad. I’d missed one trip, but maybe my second could be saved. I considered wadering up and finding a run to fish, but didn’t want to be absent if George needed me. And the sun was high anyway. I made myself a sandwich, resisted the temptation to break into the beers I’d brought for my guests, and parked myself on the steps of the public library adjacent to George’s shop and perused a copy of The New Yorker, which I’d thrown in the car. There was a particularly good story by John McPhee on the British Open golf tourney. One hour passed, then two. I didn’t want to seem pushy, but I was beginning to become concerned about my auction trip the following day—would I have a trailer? I meekly approached George in the back. “How are we looking?” I asked. “Oh, my wife had to pick up a part in The Dalles,” George replied. “She’ll be back in an hour or so. I forgot tell you. Sorry.”

As the sun made its way west, I moved across the street to a set of benches outside the Redside Tavern, downtown Maupin’s premier (and only) watering hole. Believing, again, that my trailer situation would not become better with beer, I abstained. Three guys on Harleys pulled up and waddled into the bar. They seemed like wannabe bikers; their helmets and panniers were decorated with tasteful stickers like “Thanks, Virgins—for NOTHING!” and “Save a Mouse—Eat a Pussy!”

At 5:15, George motioned me over. The trailer was done. I called my auction guest in Portland and told her all systems were go, reunited with my trailer and drift boat, and rolled back down the hill to my evening’s lodging. It had been an arduous day, marked by long hours of waiting and brief crises of faith. Not unlike steelhead fishing. Though I could’ve easily parked the trailer, popped a beer, and called it an early night, I knew the sun was dipping below the rimrock, and decided that the last hour of daylight may as well be enjoyed on the river.

I’m not a religious person, but I do vaguely believe in karma—or at least the notion that one’s good or bad actions eventually come home to roost. I had not performed any great acts of charity, courage, or selflessness that Friday, but given the problems I’d faced, I’d behaved with a certain level of decorum. I hadn’t sworn (much) or kicked the trailer when the wheel departed. I’d been patient in Chris and Hawkeye’s camp, and perhaps even more patient on the library steps in Maupin. I had resisted the default urge to drown my disappointments, had kept my promise to the following day’s guests, and had opted to persevere and visit the river instead of accepting the easy defeat of sitting my lazy butt on the porch of my rented cabin.

For these reasons, I was rewarded with a steelhead, even though another angler had just left the run I fished … and that I cast for only 15 minutes. As it was a hatchery buck, I conked it on the head, walked up to the access road, and handed it to the first passerby who stopped.

I want my trailer karma to keep circling back.