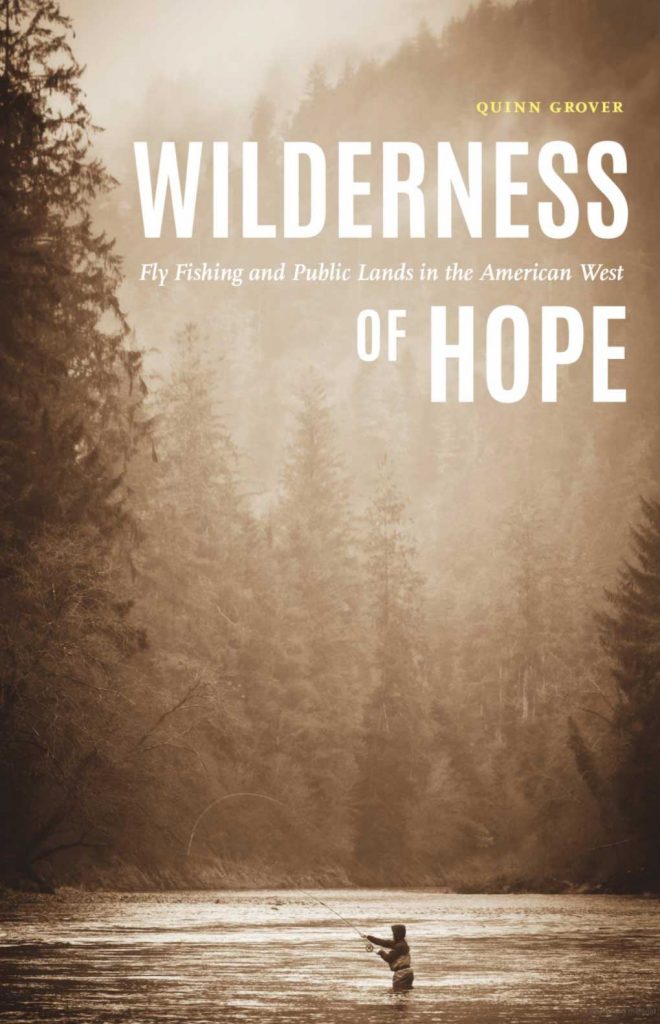 “…fishing is mostly a conduit to the outer world of natural phenomena and the inner world of the self.” – Marcelo Gleiser, The Simple Beauty of the Unexpected: A Natural Philosopher’s Quest for Trout and the Meaning of Everything (2016)

As I wrote this review in 2020, in the year of living dangerously, the coronavirus pandemic has swept across the world and impacted life in unimaginably drastic and profound ways, so profound and unimaginable, in fact, that we will be paying the bill for a long time to come. Under travel bans and stay-at-home orders, combatting the cumulative effects of restlessness and worse yet depression presents difficulties. My usual antidote to the blues—a favorite wild trout stream five hours away in West Virginia—is out of the question. So if I couldn’t have the therapeutic effects of fishing, I could have the next best thing: I could read about fishing.

I had a small stack of review candidates on my desk, but my hand fell most often on a handsomely produced memoir-ish, essayistic book by eminently fishful person and accomplished writer Quinn Grover. I admit that I am a sucker for literate books by people whose first life is a vocation other than professional fishing and who have the knowledge of and skill with language to write well and convincingly. I admit to sometimes being less concerned whether the person fishes well than I am with whether he or she writes well and makes those personal experiences not just accessible but moving and memorable. I want to come away from such books having been touched at a deeper chord than run-of-the-mill accounts offer.

Call me perverse, but I am especially enamored of books by fly fishing English professors (of which I was one) whether it’s Bliss Perry and Odell Shepard from the old guard, Nick Lyons, Wayne Fields, and Ted Leeson from the middle range, or James Barilla, Jeff Metcalf, Henry Hughes, and Chris Dombrowski from right now. Writing well about fishing—by which I mean embedding fishing in a larger cognitive framework—links them all in a continuum of reflective personal angling prose, part of a genre category called “creative non-fiction,” to distinguish it from traditional journalism. To put it another way, the space that lies between “natural phenomena” and “world of the self,” as Marco Gleiser states in The Simple Beauty of the Unexpected, is the literary and philosophical space that creative non-fiction seeks to fill.

Grover is an English professor at Brigham Young University-Idaho in Rexburg, Idaho, just a short hop from two “serious” world class “trout rivers”—the Henry’s Fork and the South Fork of the Snake, part of what he calls “the unpredictability of wild places.” He makes evocative, candid, thoughtful dives into the complex meaning of fishing, much of which isn’t always confronted head-on, but occurs at the interstitial seams and back eddies of the riverine experience, “some secret place that was hidden from the rest of the world.” Grover highlights Western American angling, and addresses often mysterious, unbidden, or unsolvable, but always arresting experiences. He is learned and literate without being pretentious or God forbid “academic.” And he understands that there is way more to fishing than tallying mere inches and pounds. “I fished through time and around it until I lost count of fish and hours and everything but the sound of the river….” Writing the stories behind the stories is what makes his narrative compelling and worthwhile to read. In addition, Wilderness of Hope is a product of a respected non-profit university press, which in itself is a nice departure from the commercial and niche houses that have long published the bulk of angling titles. As a bonus, the dust jacket carries an endorsement from Anglers’ Club member Craig Mathews, fisherman and conservationist extraordinaire.

Grover is a former free-lance writer, whose numerous earlier publications appeared in The Drake and American Angler as well as on his retired blog, In the Back Eddy, and then as a guest commentator for the blog Chi Wulff. Even with such credentials he admits he’s not a “trout bum” but a “working class angler,” a “weekend angler,” who, like many of us, is willing to “drop everything in his workaday world” when “the first trout rises to the first large bug.” Despite his refusal to give himself airs, Grover comes across as a perceptive, well-traveled, experienced angler.

His fascination with fly fishing began on a Boy Scout outing on a meadow section of Sevenmile Creek in central Utah when he was thirteen and has been a steadily growing, “integral part” of his personal identity ever since, and a way of “recalibrating” his own life. Self-consciousness, however, goes just so far before it muddies the water: “Thinking too much about why I fly fish,” he reflects, “especially while I fly fish, is forcing knowledge in a way that cuts pleasure off at the knees. I know only that fishing provides me with something I cannot get anywhere else.” That “knowledge” of fishing’s needfulness, he concludes, “is enough.” And yet, parsing that quality of “enough” requires a couple of hundred pages of literate, reflective, satisfying prose.

Wilderness of Hope is not strictly chronological in development, as one might find in an autobiographical monograph, but instead weaves and shuttles back and forth with some overlap and repetition between a series of memorable fishing experiences and enduring memories involving his father (who taught him to fly cast), his brothers, friends, and other family members. “More than anything, fishing was the line that ran through the men in our family.” In chapters titled “Wandering,” “Solo,” “Fishing Conversations,” and twenty-six other similarly revealing, deeply considered and anecdotally textured essays, Grover provides a kind of prismatic account of his fly angling life. It is a life categorized by focussed themes, from “Reassurance” in Part One, through “Reflection” in Part Two, and thence to “Renewal” in Part Three, the latter of which includes “Paige’s Trout,” an especially moving and bone-honest account of leading one of his daughters to her first fly rod trout. In doing so, he imagines closing a redemptive circle: “I hope for a day and for a geography where a word or smile from my knowing child lifts me above my own limitations, for a time and a place where they pull back the willows and lead me to a secret, wild creek in a public wilderness where a trout might rise with all the grace and beauty and hope that carries us all forward.”

Professor Grover is a thinking man’s angler, whose book is attuned to the cultural paradoxes of our sport and faces up to essential American dichotomies between individualism and societal demands, cerebral knowledge and felt experience, and especially wilderness and civilization.
He is an unabashed and savvy proponent for public lands. He is an admirer of novelist Wallace Stegner, whose famous “Wilderness Letter” (1960) profoundly informs this book (it also owes debts of sensibility to Thoreau, Aldo Leopold, and Norman Maclean). Stegner’s plea is among the most eloquent and influential defenses of the “wilderness idea.” His concept of wilderness as a “geography of hope” has had enormous impact on theories and practices of the wild in the past six decades. Indeed, Grover wants us to consider his own book “not only as tales of an angler escaping back to wilderness but as a series of stories about trying—and not always succeeding—to find a home in nature, a way of dwelling.”

Wilderness of Hope is a philosophical road trip, a kind of interior travel narrative, through the alluring Western angling landscape: “Wild lands have the potential to remind us of our heritage, a heritage of wildness itself in which life and death are more finely poised, more intricately woven, than they might seem in an office cubicle.” His journey traverses familiar big-name rivers such as the Metolius, Green, Madison, and Henry’s Fork, as well as back country high-altitude lakes, and unnamed small freestone streams of his beloved Uintas Mountain range. Wherever he lands, Grover frequently raises questions that nudge us to look behind the veil of iconic, panoramic, regional vistas to deeper issues “Why was I drawn to these places? What was I looking for, and did I know when I found it?” Self-questioning and holding himself to account—especially about the good or harm his own writing will do—are part and parcel of his quest to find a spiritual home in that vast and longed-for environment.

The answers Quinn Grover discovers are positive; the soulful destination—the habitation—he seeks is “wildness with the wilderness.” Thankfully for those of us who are anglers, fly fishing is his “preferred method” of immersing himself in the primal scene. Fly fishing is not about mastering nature, ripping lips, counting coup, but about understanding the large web-like picture. Fly fishing “asks its participants to think like fish,” which in turn plugs us into the entirety of the troutful environment, so that catching a stream-born trout, whether it is a westslope cutthroat or a rare bull trout, is “holding a conduit to wildness.” “To see the way such a fish melts back into the stream—disappearing into a camouflage of river stones and sand—is to witness the products of natural selection firsthand. How many hundreds of adaptations must occur before a fish becomes invisible?” He continues: “An angler who has caught and released a pure strain cutthroat becomes an advocate for the fish and the river and the entire concept of wildness because that angler’s connection with wildness is suddenly real and invariably concrete.” That is a moment and a way of being, Grover suggests, to which we should all aspire.

Wilderness of Hope is a complex, multilayered love letter to fly fishing public lands and waters, which are surely among the indisputable glories of our democratic society. Grover’s account is persuasive and even-keeled and never resorts to rant or holier-than-thou condescension. “Doing no harm,” he states, “should be part of the equation when considering the fate of public lands, and sometimes that requires us to blaspheme the gospel of efficiency.” His advocacy for such indispensable, treasured places is more germane and prophetic now than ever before. Under cover of the coronavirus pandemic, at a time when our energies have been distracted elsewhere, federal administrative efforts to dismantle public lands, undo all manner of protective environmental measures, and turn America’s great wilderness areas into bottom-line, cash-producing industrial sites came closer than ever to being enacted. We may have dodged a bullet for a while at least, but without constant vigil, the destruction of nature can happen again. The solace that comes from reading Grover’s book hinges on its moving account of why that unbridled dismantling should never become business as usual. Wilderness of Hope reminds me that even in this moment of renewed awareness of climate fragility and change some things still have a chance to turn out alright. If we pay attention, act accordingly, and put our money where our mouths are.