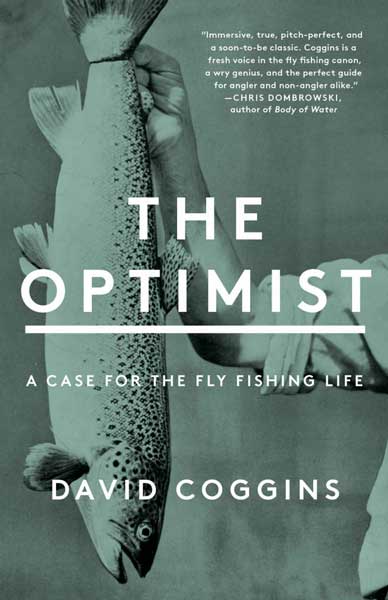 Buy “The Optimist” on Amazon

“Is there fish in there?” A southern drawl spooked me, and I looked up to see an older man climb out of his Jeep. He approached me with an easy smile. From behind my sunglasses, I glared in return.

“A few,” I relented. I’m not normally prickly like this, but the southern man’s Jeep was the third vehicle in a small dirt pullout off a gravel highway. Behind us was a river, and a few bends upstream was a lone angler. I’d talked to him when I pulled in and he was rigging up – as I was when the Southerner parked – and the angler said he was fishing upstream. I told him I’d head downstream and stay out of his way.

I assumed the Southerner wasn’t attuned to the fly fishing etiquette of small streams in the Rockies, which put me instantly on the defensive.

“Is it just fly only down there, or can you use lures?” He pointed to the water.

As soon as I said that, I wanted the words back. The Southerner was rightfully pissed off, and he drove away after exchanging a few more tense words. I kicked glumly at my truck tires, frustrated that I’d perpetuated one of the stereotypes that’s plagued fly fishing since its inception.

In less than five minutes, my highfalutin’ arrogance reinforced the idea that fly anglers are snobby, pretentious sorts. Yes, the fly fishing industry has worked hard over the past decade to put that perception behind us. We’re much more inclusive now than when I started fly fishing 20 years ago. But the Southerner wouldn’t think so after meeting me. I’d confirmed all the bad about fly anglers, and shown little – if any – of the good.

That’s how I feel after reading David Coggins’s The Optimist.

Coggins is a good writer, with a keen eye for stitching together a narrative. While his liberal use of commas instead of periods or semicolons hurts my English-teacher heart, Optimist isn’t an altogether unpleasant read.

What’s bothersome is that it perpetuates the stereotypes that the fly fishing industry has collectively spent inordinate time and effort to remove.

Coggins writes that this book is about “the pursuit of fishing,” then proceeds to tell the reader that, “Fishing in the modern world, I’ve come to realize, is a contrary act. While it might improve one’s moral character . . . to fish with purpose and intensity, to seek sporting opportunities in far-flung places, strikes many as decadent.”

Fly fishing can be decadent, but for the vast majority of us, it’s not. Coggins recounts trips to Montana, the Bahamas, Patagonia, and more, in this book. Most of us anglers visit one of those meccas in our lifetime, if we’re lucky. No, the decadence is seen in how Coggins tries to conflate fly fishing with morality, or even opera. That’s a comparison which, for someone writing to an audience who largely can’t afford the Barbour jackets and waxed cotton shirts Coggins favors for his trips, falls on deaf ears.

“When Countess Almaviva sings her aria at the end of The Marriage of Figaro, it’s one of the most beautiful passages in music,” Coggins wrote. “You can listen to it anytime, but if you watch the opera at the Met it’s four hours into the production. Getting to that point reveals the burden of her character’s loss and the delicate forgiveness of her husband. All that time is necessary to feel the full weight of what she’s singing. Similarly, catching a fish without waiting is a distorted experience.”

That’s on page four of Optimist, and Coggins doesn’t let up. It’s as if Coggins doesn’t realize the audience to whom he’s writing doesn’t exist in the majority anymore. Folks who immediately turn to opera as a way to explain fly fishing live only in the periphery of our sport.

In addition to conflating fly anglers with elites who can afford four hours at the Met, Coggins reinforces the very tired trope of a man asking his wife/significant other for permission to fish.

“Are you going fishing? a loved one asks, her slightly judgmental tone seems to linger in the air. Yes, I told you the other day, I answer sheepishly. I mentioned it briefly when you were distracted (I fail to add).”

One of the first stories I ever pitched to a large fly fishing magazine revolved around that attitude of needing to beg to go fishing. The editor didn’t just reject it – he told me not to fill his inbox with tired garbage that reinforces the idea that only men can go fly fishing, and they must get permission from catty, nagging wives to do so.

From there, Coggins starts to unfold different lessons he’s learned while fishing in various famous fisheries. In Montana, we’re treated to an in-depth explanation of how he organizes gear in his car, complete with a bulleted list of tips. Included on the list is, “a herringbone sport coat, in case the lodge I’m staying at is nice.”

Now, Coggins is a men’s fashion and style writer, who lives in a single-room apartment in Manhattan. Sly remarks on clothing and appearance are in his wheelhouse, but it feels harshly juxtaposed against stories about so-called fishing adventures.

Consider his story about chasing bonefish in the Bahamas. Coggins writes in-depth about the gear he bought for the trip, focusing so much on what he bought and how it makes him appear, that the fish he caught are just an afterthought.

“Fred Astaire had his valet (his valet!) throw his suits against the wall to take the newness out of them,” Coggins writes. “Gleaming, unused equipment on the flats just reinforces my lack of experience.”

On the flats, you’re likely only with two or three other people, at most. Your guide and some fishing buddies. And I promise they’re not focused on how your new reel makes you look like a rookie. They’re looking for bonefish while you’re looking for a tailor.

Again, Coggins is a good writer, and these stories are compelling. It’s the message they convey, however, that’s the problem. Fly fishing is not an elitist sport, full of sport coat wearing, cigar smoking, stock trading, self-obsessed dimwits who jet from one scenic location to another. For years, that was the perception – to fly fish, you need money and free time, two things only rich white men usually have.

While I wouldn’t call my fishing buddies blue-collar in the traditional sense of the word, almost everyone I fish with is just another average person, getting by. They’re out on the water for the sheer joy of it, and would probably leave me at the river looking for my own ride home if I started waxing poetic about fly fishing reminding me of the opera.

When reading other contemporary fishing authors – John Gierach, Tom McGuane, Monte Burke, Tom Rosenbauer, Bob White, Chris Hunt, Todd Tanner, Hilary Hutcheson, April Vokey – I’m not jarred out of the story by personal anecdotes that have little to do with fishing. It’s as if Coggins is instead writing about fly fishing’s long-gone aura of elite mystique, while others opt to simply tell great fishing stories.

Coggins’s stories are good, but they’re not what fly fishing needs.