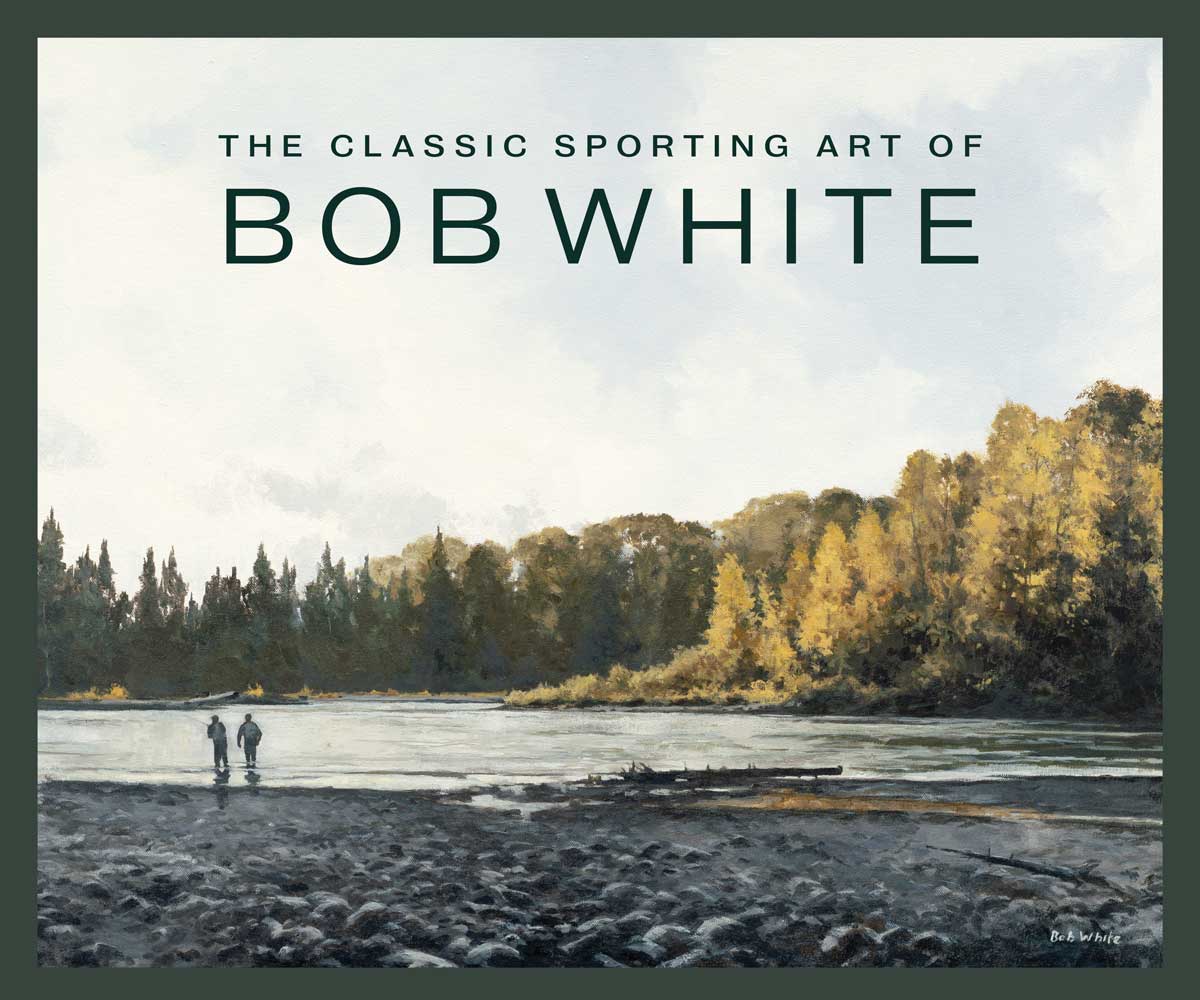 I just got my first look at The Classic Sporting Art of Bob White (Stackpole Books, 280 pages, $75) scheduled for publication in October. Well, not the actual book, but the color digital mockup printers call a “proof,” so I still have to imagine it at its full size of 10 x12 inches, between hard covers and with the satisfying heft of a book printed on the heavy, high-quality stock that’s used to reproduce paintings.

I should say right off the bat that Bob and I have been friends and colleagues for something like 30 years. We’ve fished and traveled together, his paintings have illustrated 155 of my magazine columns covering over 25 years with more in the works, and he’s painted the covers for three of my books. I think the guy’s great – as an artist, fisherman and human being – so don’t think of this as an objective review; think of it as a recommendation from an unreconstructed fan.

This is a beautiful book, as all successful art books must be. There are 246 annotated images – mostly paintings, a few drawings – divided more or less equally between fishing and wing shooting. I wrote the introduction to the fishing section, Donnell Thomas did the honors for upland and waterfowl hunting and Tom Rosenbauer wrote the foreword.

The annotations that accompany the images are more interesting than most and they’re all over the map: long and short, sentimental or technical – whatever Bob had to say about each piece without padding or artistic doubletalk.

The instructional side-bars on how some paintings were done are small revelations. For those of us who aren’t painters, it’s fascinating to see these step-by-step photos that show how a composition takes shape and how the effects of color and light are achieved, not to mention the long-range planning that goes into a painting.

And a few of Bob’s essays are scattered through the book for texture and context, though not enough to distract from the artwork. I get the same feeling from Bob’s stories that I do from those of the late landscape painter Russell Chatham; that it seems unfair for someone who paints so beautifully to also write so well.

They say fishing and hunting no longer constitute the same “market,” and they could be right, but Bob and I date back to when outdoorsmen grew up with both firearms and fishing tackle, trading off as the seasons dictated and agonizing over the choice when they overlapped. Some, like Bob, have stayed switch-hitters for life, while most eventually leaned farther one way that the other. My father was a hunter who also did some fishing and I became a fisherman who also hunted. It’s a subtle, but real distinction.

Bob has been a painter since childhood and he realized earlier than most that our real reason for being out there wasn’t so much to bag a limit as to get sunk in the familiar but always surprising beauty of wild fish, wild birds and the wild places where they live. And Bob knows his subjects inside out. In his revolving capacities as sportsman, artist and professional guide, he’s been all over the Western Hemisphere, following the seasons from Alaska to South America like a migrating duck, constantly sketching, painting and taking photos to use as source material. I think that’s why his work has such a sense of unforced authenticity. He’s not a tourist recording pretty things he’s seen on a visit, he’s documenting his own life and livelihood. So, when Bob paints a river, there’s a good chance he’s seen it through entire seasons, in different stream flows and weather; on days when you couldn’t keep the fish off your hook and days when you couldn’t buy a strike. And when he occasionally paints a new piece of water, a lifetime spent staring at rivers makes it immediately and intimately familiar.

That same familiarity is also what gives his paintings their plainspoken, almost journalistic character. Unlike some sporting art that tends toward corniness, you never get the sense that Bob’s compositions are romanticized. Sometimes his subjects are playing a fish or swinging on a bird, but they do it with an admirable economy of motion and no unnecessary theatrics. These are sportsmen who, like Bob himself, have been at this a long time, know what they’re doing and are long past showing off.

But Bob is more often drawn to the quiet, sometimes pensive moments in sport. One of my favorite paintings is of a bush pilot and two guides standing on a dock next to a de Havilland Beaver on the kind of drizzly, foggy Alaskan day that grounds float planes. One guide is filling a gas can while the other two watch for no other reason than that on the rare slow day at a fly-out fish camp, watching gas cans being filled is the only available entertainment. The sky is mottled gray and horizonless (Bob’s skies are always interesting) but with just enough of a pinkish glimmer to suggest that the sun could still poke through and to give the wet dock a dull sheen. The painting’s title is “Waiting.”

Another shows a lone hunter and his black Lab coming in at the end of the day. The hunter has no fewer than three drake mallards slung heavily over his shoulder and has stopped to look up, presumably at another flight of ducks. His shotgun is held loosely at his side and his pose is entirely relaxed. He’s done hunting and, as the title informs is, he’s now “Just Watching,” while the sky and the surrounding prairie have begun to turn the shades of pink and gold that suggest the coming sunset.

Bob is prolific and his work has been appearing in magazines, books and calendars for decades, so it’s hard to imagine anyone who’s been in the sporting life for long and isn’t familiar with his paintings. Bird hunters think of him as a hunting artist; fishermen know him as a fishing artist, and sometimes he’ll surprise us both with an unpeopled landscape: a wilderness river, a Midwestern farm, an ax stuck in a chopping block, a coffee pot or a straightforward portrait of the old ice cream shop in the small Minnesota town where he lives with his family, ironically shown on the kind of frigid winter day when ice cream is the last thing on anyone’s mind.

So maybe the best thing about this already excellent book is that it might show you a side of Bob’s work that you didn’t know existed. Sometimes it’s only when he wanders outside the confines of sporting art with its built-in emotional baggage that you begin to see just how good a painter he is.

You can purchase signed and signed limited edition copies of Bob White’s “The Classic Sporting Art of Bob White” for September 1 delivery on his website.