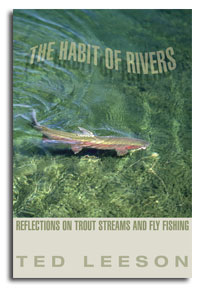 ANOTHER MILE and the river horseshoes back from the old highway into a woods of Douglas fir, hemlock, cedar, and vinemaple. The most beautiful section of the drift begins here, and for a time I put up the oars, sit on the flydeck, and watch the river, partly for salmon, but mostly for itself. In the smooth glides, every detail on the bottom rises in relief. The bed of cobbles, crayfish with waving claws, swirling patches of sand, sunken trees, and mosaics of waterlogged leaves, all pass beneath you in an endless, hypnotic succession. Shallows drop suddenly into inky pools. Boulders loom up from an unseen bottom to touch the surface, and then disappear. Underwater canyons wind through broken ledgerock cliffs. Here and there, the river bottom is scoured to clean bedrock, vast rippled sheets of it fractured into blocks that are pitted and pocked with circular, foot-deep craters. The boat drifts above it all in effortless silence, like a hot-air balloon. The sense of remoteness is absolute. Staring overboard with no other reference point but the river, you can easily persuade yourself that the boat is motionless and the river slipping backward beneath you.

In a few places, the streambed shelves off into black-bottomed pools where silt has settled out in the slow currents. During the run, salmon congregate in this deep water, and at morning and evening when the light is low, they roll and leap incessantly, clearing the surface in long flat arcs and slapping back down, or churning the water in deep boils that leave slowly dissolving whirlpools. The behavior is common among all anadromous fishes, though no more comprehensible for that. Explanations, however, abound. Fishermen, like the rest of humankind, will talk relentlessly and authoritatively about what they understand least. I’ve been told, to take but a sample, that salmon roll because they are trying to shake loose eggs from the skeins; because the water is too warm; because they are gulping air; because they are trying to rid themselves of sea lice and parasites; because they don’t like fresh water (it kills them, as you can plainly see); and simply because they’re horny — an explanation with at least the ring of truth. There are those who mourn the passing of the American rural culture, and every summer the Appalachian and Smokey Mountains swarm with well-scrubbed boys and girls from tony New England colleges, cruising the backroads in vans full of sound gear, taping oral folk histories. They ought to come west. Few can match the Pacific salmon fisherman for picturesque absurdities.

These deep pools may be classic salmon water, but they can’t really be fished in the classic fashion, if such a term describes the tedious double­hauling of high-density or lead-core shooting heads on eighty-foot casts. The river for the most part is too small, and the pools offer too little current to animate a fly properly. On holes with steep banks and deep water, I’ll make a pass through with a floating line and a small, heavily dressed fly, casting to the bank and retrieving in short twitches. When that fails, and it usually does, I resort to a sinking line and a larger pattern, and begin the kind of laborious blind-dredging that has earned fly fishing for Pacific salmon the half-deserved reputation as a sport for iron wills and soft brains.

Small wavelets slap the boat bottom as it rides a little tongue of current into the head of the pool. Though it is past midday, a salmon rolls in the shade of alder limbs arching over the water. In the heart or mind or wherever essences reside, I am a trout fisherman, which means among other things that any surface disturbance made by a fish, for whatever reason, automatically registers on the consciousness as a “rise.” It is an instinctual association against which all knowledge, better judgment, and experience are helpless, and when the salmon breaks the water, I row over and begin covering it with expectant, pointless casts. Years of humoring this particular delusion have yielded exactly two salmon, neither of which in all likelihood had actually rolled, but just happened to be in the vicinity of a fish that did. Today does not bring a third.

The bank has promising depth here, though, and I continue slowly along it, placing casts at rhythmic two-foot intervals, thinking of other things. Near the tail of the pool, the water behind the fly billows gently with the quick pass of a fish. But no grab. A hard roll cast returns the fly to the still-dissipating ripple. A few fast strips of line and the surface swirls again, this time more violently, but with no more definitive result. Dropping the fly back a third time, I let it sink for perhaps half a minute and inch it back, flicking the rod tip now and again to send a tight shiver down the line. As the fly approaches the boat, I can see the salmon following a foot behind, matching the erratic retrieve precisely, advancing when the fly does, pausing when I pause, maintaining a scrupulous distance. Only a rod-length away the fish stops, a soot-colored male coho of perhaps six pounds. It holds just beneath the surface, canted slightly upward, staring past me with an eye fixed severely on something remote. This dark eye and the fiercely hooked kype remind me of a bird of prey. For all that is magnificent about the salmon — the clean, taut hydrodynamic lines; the thick muscling; the glints of blue, green, and indigo flashing from a silver skin — for all these, it seems strange that the eye and kype should be the features that haunt. Something must inhere in them, for they haunted the past as well, recurring again and again, almost obsessively, in carved and painted images of the Klickitat, Tlingit, and Haida, as though these features alone expressed some deep essence of the animal.

The salmon turns and disappears downward. But the eye and the kype linger in afterimage, abstracted halos of life’s determination for itself. It seems to me no accident that salmon flesh and salmon spawn are precisely the same color, as though the animal reconstitutes its very substance into another generation. But here and now, in the middle of the run, the continuity is only an inference, an assumption, a conjecture to be believed in. What is visible is only life leaking from the salmon in the increments of a million eggs, and this is the most compelling and lasting impression of the run, not of poised vitality, but of dying. The gradual darkening of fish in fresh water is a triumph of fertility and the intimation of doom. Sex and death are forever linked, I suppose, but never so tangibly and unequivocally as in the salmon. Even now, the first fish are spawned out and dead, washed by the current into calm water and visible on the river bottom. Some are ringed with scavenging crayfish, others encrusted with the cases of caddis flies that will themselves be food for smolts and turn carrion back into salmon. This seems a long way off, though.

In a rain forest or a drop of pond water, we are accustomed to the spectacle of extravagant potency. But death is exactly as profligate as life, and when more of the run arrives and spawns, the gravel bars and shoals will be strewn with dead fish, their dried skins shrunken tightly over ribs like the caved-in fuselages of things that once flew. The odor of decay hovers above the river, the acrid, musty, ammoniac smell of an old horse­hair sofa stained with cat piss. When the first heavy rain of winter comes, raising the water to twice its height before subsiding, the flaccid carcasses of salmon will hang twisted and draped from bankside limbs in grotesque postures, like a Dali painting. Still later, there are only bones. The hollow-eyed skulls with long, beaked jaws scarcely resemble the living animal at all. They seem strange and ancient, distantly reptilian or avian, like the fossil of an Archaeopteryx I once saw, perfectly preserved down to the finest imprint of its scale-like feathers.

If you fish much during the run, what strikes you most is how slowly this all occurs. Salmon do not spawn and drop dead. They weaken by degrees. Many fall victim to a debilitating, cottony fungus that tatters the fins and tail, and eventually covers the body in gauzy patches. A ragged fish may hang on well into winter, ghosting through the river and looking as purposeless as in fact it is — “a shroud in a gutter,” Ted Hughes writes, “a death-in-life.” The first January I spent in Oregon, wading this same river for winter steelhead, I half glimpsed through the riffled water an enormous mottled form that would not resolve itself into a familiar object. It moved downstream toward me with the thick-bodied sluggishness of a moray eel. I edged backward against the bank, keeping a close eye on it, not quite panicked but distinctly uneasy. It turned and followed. At the moment I recognized it as an exhausted, rotting salmon, the fish slid its length along my shin, and the contact reverberated in an involuntary full-body shiver. After that, I couldn’t seem to get warm again, and left. Death underwrites life, I know, but when it comes right up and brushes your leg, all that seems somehow unconsoling.

If we share anything with the past it is a sense of the violence in nature. The Puritans looked at a wild New World and saw the abode of the devil, and they battled it with a ferocity that equaled the savageness of their perception. Now, having distanced ourselves from the wilderness, we view it through an imperturbable Darwinism, an indifferent survival­of-the-fittest. But all that we’ve really done is alter the terms. Dismissing the moral repercussions of struggle, we have only tamed ourselves. Nature remains a place of violent death. And in a world of quick, predatory, kills, of fangs and claws and coils, the slow decay of the salmon seems anomalous, and eerily human.

A sharp west wind rises, blowing upstream and bringing with it a sheet of gray clouds. Caught in the shear of opposing currents, the boat is almost motionless. I have to row to make any headway. The river bends back to the highway and to the sound of log haulers downshifting on a switchback grade. There are no more salmon to be seen. When a small island eventually appears ahead, I pull to the right of the river and skid over a sandy shoal, down a tight channel barely wide enough for the boat. Halfway down at the pull-out point, I tie the bow line to a willow. The truck is waiting, shuttled down by arrangement. I dig the spare keys from my pocket and, twisting around in the seat, looking over my shoulder to back the trailer to the river’s edge, I see on the rear window the first streaks of the first winter rain.