“Reckoning: On Drought and Cancer” 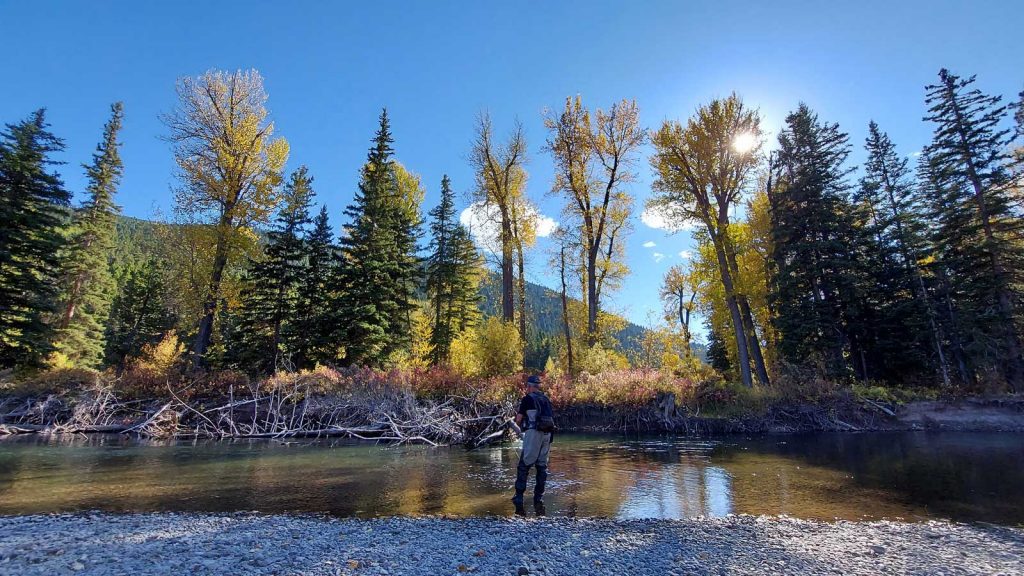 On one of the last lukewarm days of fall, on the tail end of the hottest summer on record, I took my mother-in-law fly-fishing. Barring two short mornings, one when a friend was visiting, and another to meet a fellow teacher on the river before school began, I had left the local river alone.

Though I had known her for years, and though we shared a passion for swinging flies for steelhead, my mother-in-law was one of the last hold-outs of immediate family members I had never fished with.

“I just like standing in the river,” she would tell me, brushing off offers to guide her.

A breast cancer survivor, my mother-in-law’s second bout came during my wedding. While she was getting ready with my wife and bridesmaids, I wandered the edges of a pond with friends and family catching fish. While I held her daughter’s hands during the ceremony, she held a port under her armpit, beneath her dress and shawl. While I spent the rest of the summer guiding clients, she went through rounds of radiation and chemo. A few years later this second round of breast cancer turned into a third, along with the loss of her father and a second mastectomy.

When we did cross paths it was in other places than home, in circumstances where fishing, if we had the opportunity, was far from her mind.

When guiding came to a grinding halt this past July due to drought, I went through the paces of life; smoke hemming in sky, bleached river rocks hemming in river, third-trimester of pregnancy for my wife, preparing to go back to teach high school during Covid-muddled times. At the end of September my wife gave birth to our first child and I took two weeks off. The river was there, as it always was, only I couldn’t bring myself to fish it. Fellow guides had begun working again, September’s last hot days a memory. Rain had come and gone, the mountains finally had snow, and the river, though low, ever so slowly had begun to rise. Still, there was a lingering residue of summer’s memories, a sense that I was doing wrong by fishing a river in recovery.

Two weeks into my mother-in-law’s visit with the new baby, it was time for a reckoning. No longer my wife’s best friend, I held my ground by curling up with our two energetic dogs, waiting for meals and adjusting to my new place in the pack. Master of the diaper change. Check. Master of taking the garbage out each Sunday night. Check. Master of easing midnight baby tears towards sleep. Check.

As we sat around the living room one Saturday I mentioned fishing. The dog’s ears perked up, but no commitments were made, nothing more was mentioned. When Sunday rolled around my wife suggested it again. Waders were tried on. Suddenly I found myself in the familiar setting of my truck’s cab, dogs in the backseat, mother-in-law up front. Though I left my boat, flyrods stuck out the back of the tailgate and I was headed down the highway. Ready or not, it was time to fish.

The stretch of river we wandered was re-channelized a few years ago and heavily braided. With deep undercut banks and side channels with a lot of downed timber, water was only running in the main stem. It is where I would have spent the summer if I was a fish during drought; well oxygenated with plenty of shelter and shady banks. Gone were the many smaller rainbows. In their place, whitefish and larger summer hold-overs too big to be eaten by other fish and herons.

As she fished for the first time in years, fall leaves landing on the water and carrying past, sun warm on our backs, I thought about recovery. The pathways our bodies must take as the years go by, the fluctuations of rivers and fish populations. Her return to the river and what it might mean for the rest of her life; what would happen to the river if drought began to occur more frequently.

There were no answers, just what light can be found wading through fall currents and immersing in riffles. But that was enough. She remembered, as did I, what it means to enter into the world of a river, even a river in recovery. Both of us had been missing something in our lives; the movement of water like balm.