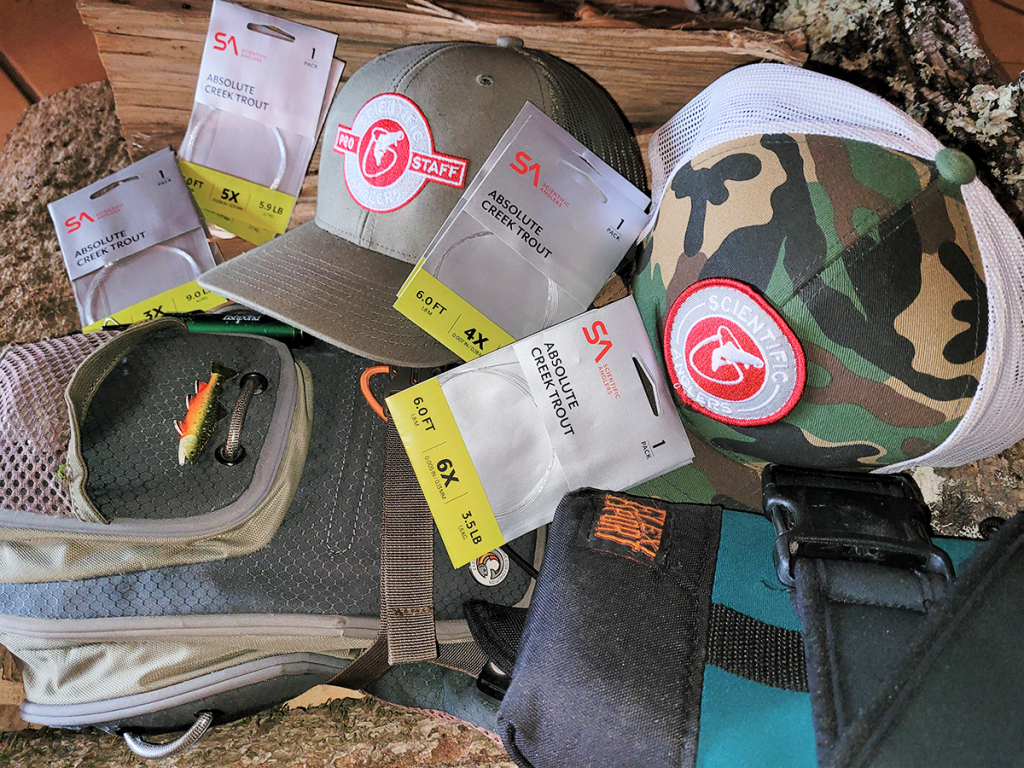 Having fly fished for roughly forty-five years, and run a fly shop for fifteen years, I’ve answered a lot of questions and given a lot of advice to anglers in regard to tackle. One of the more commonly asked questions has been: “What length leader should I use?”

The type of fly line (floating or sinking), size, and weight of fly, size and type of water, species of fish, and even fishing pressure come into play with regard to leader length. However, a simple answer is “roughly the length of your rod” with the caveat “what you can effectively cast and present.” While there are times when going longer can help, and sometimes notably, a well-presented shorter leader is typically more effective than a poorly presented longer one.

Small stream fishing represents more than half of my total fishing hours, and 75 percent or so of my late-spring through early-fall fishing. I currently have ten fly rods under 8-feet, six of which are under 7-feet. While 7.5’ leaders work fine for rods in the 7- to 8-foot range, I find they can be too long for rods shorter than 7 feet, especially on small water and in tight quarters.

Small stream fishing is a game of short accurate casts. The ever-present streamside vegetation and low-hanging canopy makes false-casting and open loops problematic, and a long leader is a good way to get your fly hooked on something behind or above you. Quick casts, roll-casts, and even slingshot casts are the rule not the exception. Use too long a leader for the rod and you’ll limit what you can do well.

For years I used 6-foot leaders from a well-known manufacturer for rods shorter than 7 feet. While the taper was actually better suited to casting bulky flies and dry-dropper rigs, they prevented me from having to use a longer leader than ideal or cutting one back to make it work.

Unfortunately as a result of, I assume, slow sales likely worsened by the lack of support for niche products, the 6-foot leaders were discontinued. While I knew I could make it through this season on leftover inventory, I dreaded the thought of going into next year without what is for me an important piece of terminal tackle.

As a former fly shop owner, I know firsthand that brand loyalty is as strong in regard to the leaders as it is with rods, reels, fly lines, or waders. While anglers will buy whatever is available when they run short, the difference between having what they want or not is selling one leader versus multiple leaders. And while the leading brands have changed several times in my lifetime, getting folks to change what they use, or shops to carry something new, is not easy.

Unlike most fly fishers I bump into who use a very narrow range of leaders, and usually from a single vendor, I have always gone wide and deep. I know what I want, and I go where I need to go to find it. I use standard leaders, presentation leaders, big bug leaders, fluorocarbon leaders, and specialty leaders for streamers and mice.

I typically have no fewer than four material/length/diameter combination leaders on me at any time, and often as many as six or eight. And my leaders almost always span multiple vendors as no one sells everything I want. In my fly shop, I carried leaders from four vendors and in a dozen or more configurations each in spite of the fact that 10 percent of the products represented 90 percent of my sales.

As a pro-staffer for Scientific Anglers, I reached out with a suggestion that they get into the short leader game. Small stream fishing, or “blue-lining” as it is called, has seen a resurgence due to overcrowding on our big rivers, a lack of interest in stocked fish on the part of younger fly fishers, and a growing pro-native movement that has driven anglers into the backcountry.

Scientific Anglers is an undisputed leader in fly lines, and has been for decades. They likely sell more fly lines than anyone else, especially when you consider what they make for others. While they have always sold leaders, they are not typically available in fly shops with most of their leaders sold in big box stores.

While I have long been a Scientific Angler fly line user, I was not always a user of their leader and tippet products. However, they have quietly upped their game in regard to leaders and tippet in the last few years, and their current products can compete with anything on the market today. The materials are strong, the tapers are good, and the prices are competitive.

After telling them what I was looking for, Scientific Anglers went to work. A few months later, I received a package of assorted 6-foot leaders to field test. The first thing I did was compare the tapers to what I had been using by running them through my fingers. The taper was more gradual than the abrupt taper I was used to, and the tippet section was noticeably longer.

I found that the more gradual taper on the Scientific Anglers leaders made them a bit more accurate, and they presented better as well. They also sink less. The longer tippet increases the life of the leaders by allowing you to make a few tippet tune-ups before they became unusable. This lessens waste and saves money.

Scientific Anglers new 6-foot leaders are available under the name “Absolute Creek Trout Leader.” They come in single packs in 3x to 6x. Hopefully, there will be some multi-pack options in the future. The diameter-to-strength ratios are solid, with 6x coming in at 3.5lbs and 5x at 5.9lbs. This allows you to fish small wets and dries on 6x, and small buggers and streamers on 5x.

And while you’re at it, consider Scientific Anglers two small stream lines: Amplitude Double Taper and Amplitude Smooth Creek Trout. The Double Taper has an appropriately short front taper (from 3.5- to 5-feet for 1- to 3-weight) and a long high-floating belly, and the Creek Trout has a unique compound taper that roll-casts well and casts in tight effectively.