Trout: What’s In a Name? 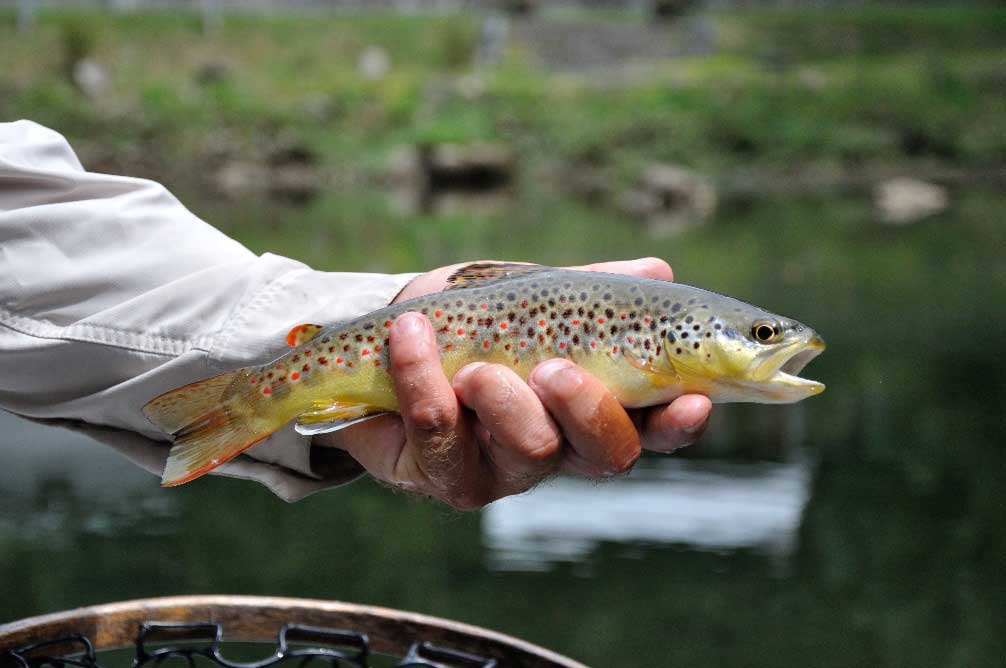 Does this look like a brook trout to you? | Bob Mallard photo

Editor’s Note: This is the fourth article in our series on fly fishing conservation.  This series appears with the support of Swift Fly Fishing, makers of Epic Fly Rods.

When it comes to fish and game agencies, how they refer to the various species of fish found in their jurisdiction says a lot about how they view them, and how they are likely to treat them.  In fact, there is usually a direct correlation between what an agency calls a fish and how they deal with it from a management standpoint.

When it comes to formal definitions of fish in regard to management and regulations, like genetics, there are lumpers, splitters, and inbetweeners.  In this case, lumping is usually bad, splitting is usually good, and falling somewhere in between can be either good or bad.  And this is most applicable to “trout,” used figuratively, then it is other fish.

Like most of the things I write about, the issue here is native versus nonnative fish, and how we treat the two from a regulatory standpoint.  Plus, there is an underlying information and education issue, which when not handled properly confuses the masses, devalues our natives, and works against native fish conservation.

Brook trout, rainbow trout, and brown trout are all unique species.  While they share the same family (Salmonidae), they do not even share the same genus.  Note that lake trout and landlocked salmon, both of which are also found in New Hampshire, are not part of the umbrella definition of “brook trout,” and are managed independently.

Golden trout are a mutated pigment-deprived hatchery-raised form of rainbow trout.  Loch Leven trout are a strain of brown trout from Scotland.  And most hybrids found in New Hampshire come from hatcheries and are brook trout/brown trout crosses called tiger trout.

Basically, brook trout, a native species, are classified the same as two nonnatives, neither of which are from the same genus and one of which is not even native to North America, a hatchery-raised nonnative mutation, and hatchery-raised hybrids.

Might this be part of the reason why native brook trout are so poorly protected in New Hampshire, and missing from many historic waters, because they are viewed and managed no differently than any other trout?

If Anyone Should Know Better…

Maine is considered the last stronghold in the United States for several life history strategies of brook trout: Lake and pond, large river, and sea-run.  It is also home to the last Arctic charr in the contiguous United States.  Here’s what Maine has to say about brook trout:

The most egregious example of lumping is classifying a hatchery hybrid (splake) the same as an exceedingly rare wild native fish (Arctic charr).  Lumping manmade brook trout/lake trout cross splake in with wild native brook trout isn’t much better.  And Arctic charr life history strategy is more similar to lake trout than it is brook trout. 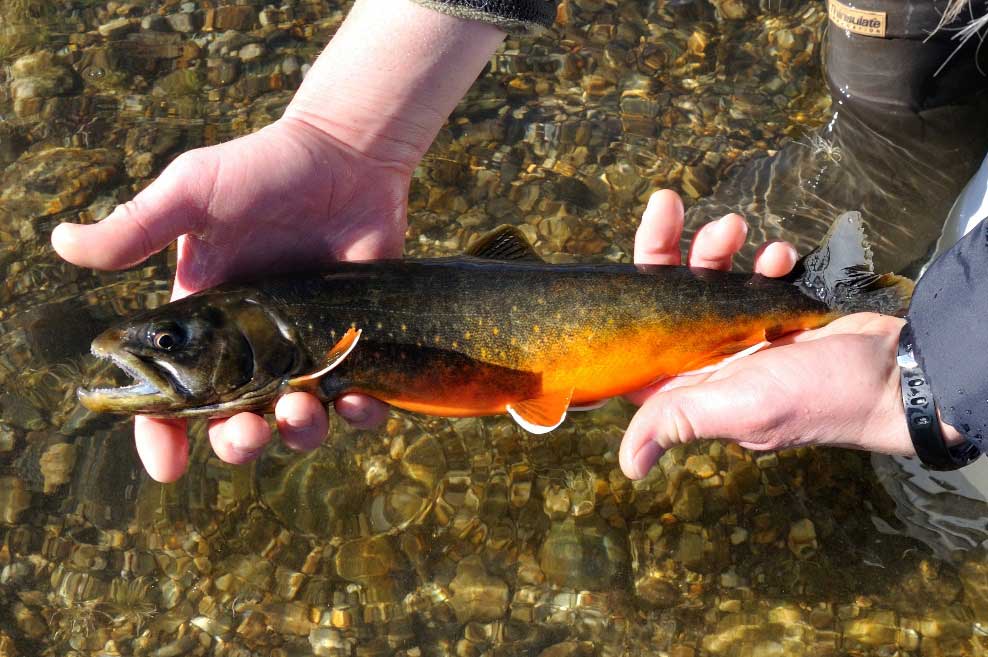 A rare Maine Arctic charr, extant in only 12 waters in the contiguous United States. Should this fish be classified the same as a hatchery-raised hybrid? | Bob Mallard

Advocates have challenged the definition of brook trout in Maine for as long as I can remember.  Most recently, two state fish and game sponsored working groups formed to provide input as to how species are managed, one for brook trout and one for Arctic charr, recommended independently to remove the other species from the definition, respectively.  Both failed to get it changed.

While native brook trout management in Maine is better than it is in states like New Hampshire and Vermont, it’s not as good as it should be, or as it is in New Jersey, Maryland, and West Virginia.  In fact, while many states are getting better at protecting their wild native brook trout, Maine appears to be backsliding in some cases, and stalled out in others.

As for rare Arctic charr, harvest is allowed in 9 of the 11 waters open to fishing, with a proposal to remove the C&R restriction on one.  Green Lake is being stocked with highly invasive nonnative lake trout, and tributaries to two other waters are stocked with brook trout.  Recently, the state entered into discussions with a camp association to resume a previously suspended stocking program that was leaking hybrid splake into Floods Pond, considered the national gene bank for the species.

Might part of the problem be that relatively common brook trout and rare Arctic charr are viewed the same, as are hatchery hybrid splake?

If Anyone Should Know Better (Part II)…

Wyoming is the most native trout rich state in the Rocky Mountains.  It is home to five sub-species of cutthroat: Bonneville, Colorado River, Snake River, Yellowstone, and Westslope Cutthroat, as well as Arctic grayling.  But when it comes to trout, sadly, Wyoming lumps its natives in with nonnatives and hybrids in regard to management:

Wyoming’s wealth of native trout is more a result of luck than design.  Take away the myriad federal land, said to be close to 50% of the state, including pro-native and heavily protected Yellowstone and Teton National Parks, and it’s likely Wyoming would have far fewer wild native fish than it does today.

Most species of trout in Wyoming — native, nonnative, or manmade — are treated the same from a regulatory standpoint.  The exception being nonnative brook trout, considered a pest, which are subject to a 16-fish limit:

Montana has no definition that lumps multiple trout species together.  They do however have definitions for bull trout and cutthroat trout, the primary native salmonid species found in the state:

“Bull Trout are defined as any trout with white leading margins on the lower fins and no markings on the dorsal fin.” – Montana FWP Fishing Regulations

“Cutthroat Trout are defined as any trout with a red or orange stripe under its jaw.” – Montana FWP Fishing Regulations 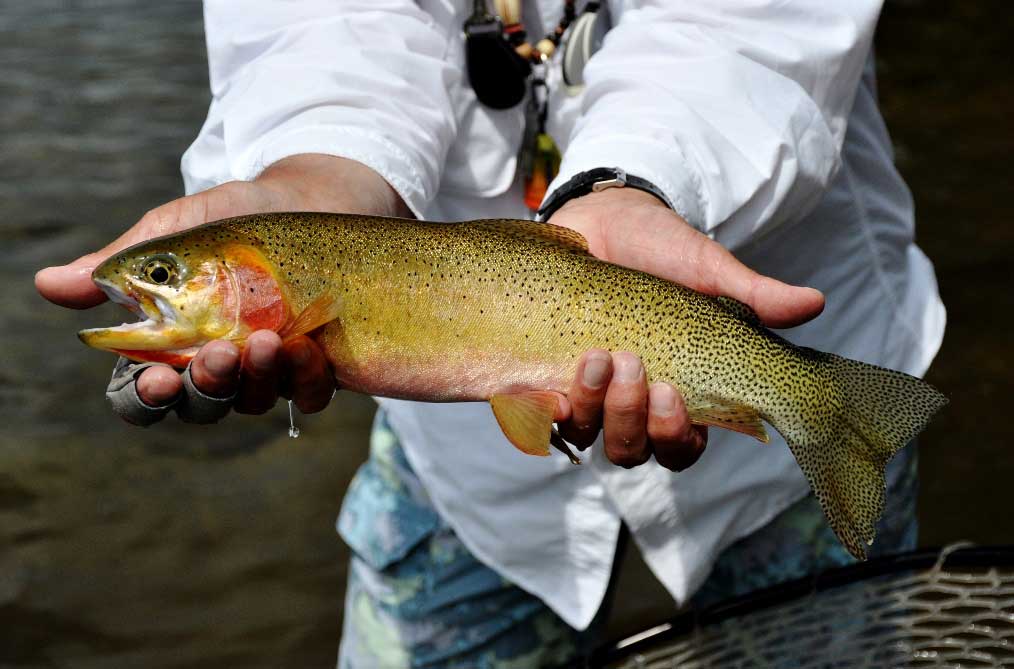 A wild native cutthroat from the Blackfoot River in Montana. Note the orange slash under its jaw. | Diana Mallard

Montana also has a list of fish species, with corresponding pictures, at the end of the rule book, and go as far as to separate them by native and nonnative.  They further clarify bull trout and cutthroat trout identification, and include a conservation message for each.  At the end they have a general native fish conservation message:

In the native trout rich Western District, Montana lumps multiple species of nonnative trout together for regulatory purposes.   There is an aggregate 5-fish daily limit on nonnative brown, rainbow, and golden trout, as well as Arctic grayling which are mostly introduced, on lakes, ponds, rivers, and streams.  The possession limit is 10 fish.  The daily and possession limit on native cutthroat however is just 3 fish on all waters.  The daily limit on nonnative brook trout and lake trout is 20 fish:

Vermont does not have a general “trout” definition, and refers to various char, trout, and salmon as individual species.  However, while landlocked salmon and lake trout are managed separately, native brook trout and nonnative brown trout and rainbow trout are grouped together from a management standpoint.

In lakes and ponds in Vermont, native brook trout, and nonnative brown trout and rainbow trout, are managed under an aggregate daily limit which is currently 6-fish.  This has the same effect as lumping multiple species under a general “trout” definition: 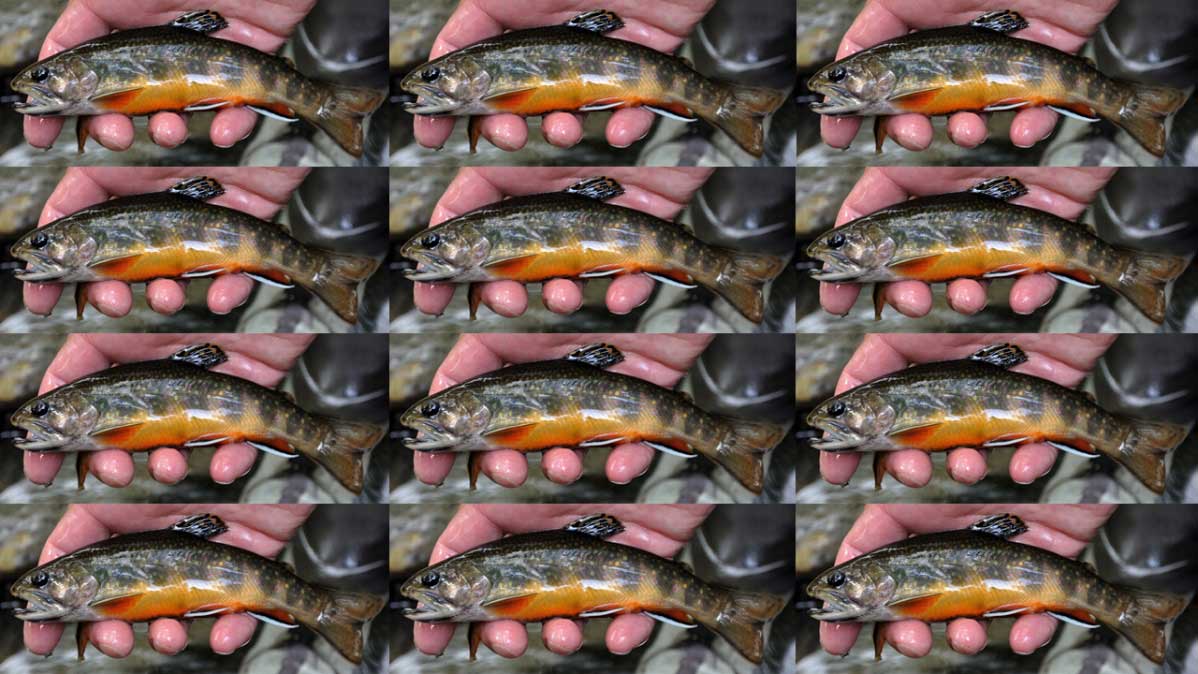 This is what a daily limit of brook trout in Vermont’s rivers and streams looks like. |Diana Mallard

In rivers and streams in Vermont, native brook trout fall under an aggregate daily limit which is currently an astonishingly high 12 fish.  But it’s even worse than it looks as while you can only harvest 6 nonnative browns or rainbows, all 12 fish can be native brook trout:

While Vermont doesn’t imply that a trout is a trout is a trout, they not only manage them as if they were, in the case of rivers and streams, they provide more protection to nonnative brown trout and rainbow trout than they do native brook trout.  While there is currently a proposal to reduce the limit on rivers and streams to 8-fish, which is still too high, it is unclear what will happen to the species restrictions.

When it comes to wild native fish management, no one does it better than the National Park Service.  And they do it best in Yellowstone National Park.  Fish species are identified individually, classified as native or nonnative, and described along with one or more supporting pictures.  They even go as far as to discuss hybridization between cutthroat trout and rainbow trout. 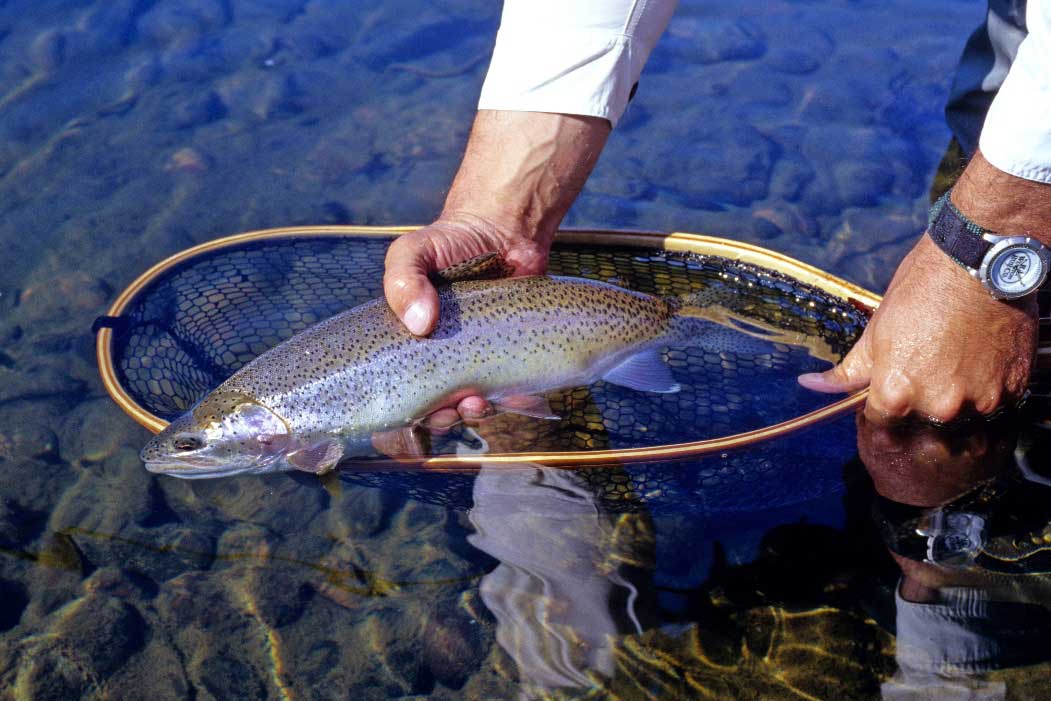 Native fish in Yellowstone National Park are provided with absolute protection.  Nonnatives receive very little protection, and in most cases, no protection at all – including mandatory kill rules.  Anglers are also expected to be able to identify what they catch:

“All native fish must be released unharmed. Natives include cutthroat trout, mountain whitefish, and Arctic grayling.”

“Each angler must be able to correctly identify various fish species. ALL NATIVE FISH MUST BE RELEASED UNHARMED”

“All rainbow trout, brook trout, and identifiable cutthroat x rainbow hybrids caught in the Lamar River drainage (including portions of Slough and Soda Butte creeks) and the Yellowstone River drainage below Lower Falls and above Knowles Falls must be killed—it is illegal to release them alive (p. 10)”

“All lake trout MUST BE KILLED in Yellowstone Lake”

While not perfect, damage has been done that cannot be reversed, Yellowstone National Park may have the most intact wild native fish populations anywhere in America.  And they present what they have in a fair, accurate, and scientific manner.

Why Does it Matter?

Native fish belong where they are found.  They right the wrongs of the past, and give us hope for the future.  Some species have been lost, and some are on the ropes.  But they persist, and with increasing ecological literacy and protection, they could continue to.

Referring to a European brown trout as a brook trout in New England is akin to referring to Asian pheasants as ruffed grouse, something we would never do.  It sends the wrong message, flies in the face of science and conservation, and devalues our native species.

How a government agency refers to its native species is often an indication of how they are likely to treat them.  While it may seem like semantics to some, getting state fish and game agencies to classify native fish at the species level would be a step in the right direction.  It would lay the groundwork for preferential treatment of natives over nonnatives by allowing for species-level management, something that is sadly missing and long overdue.