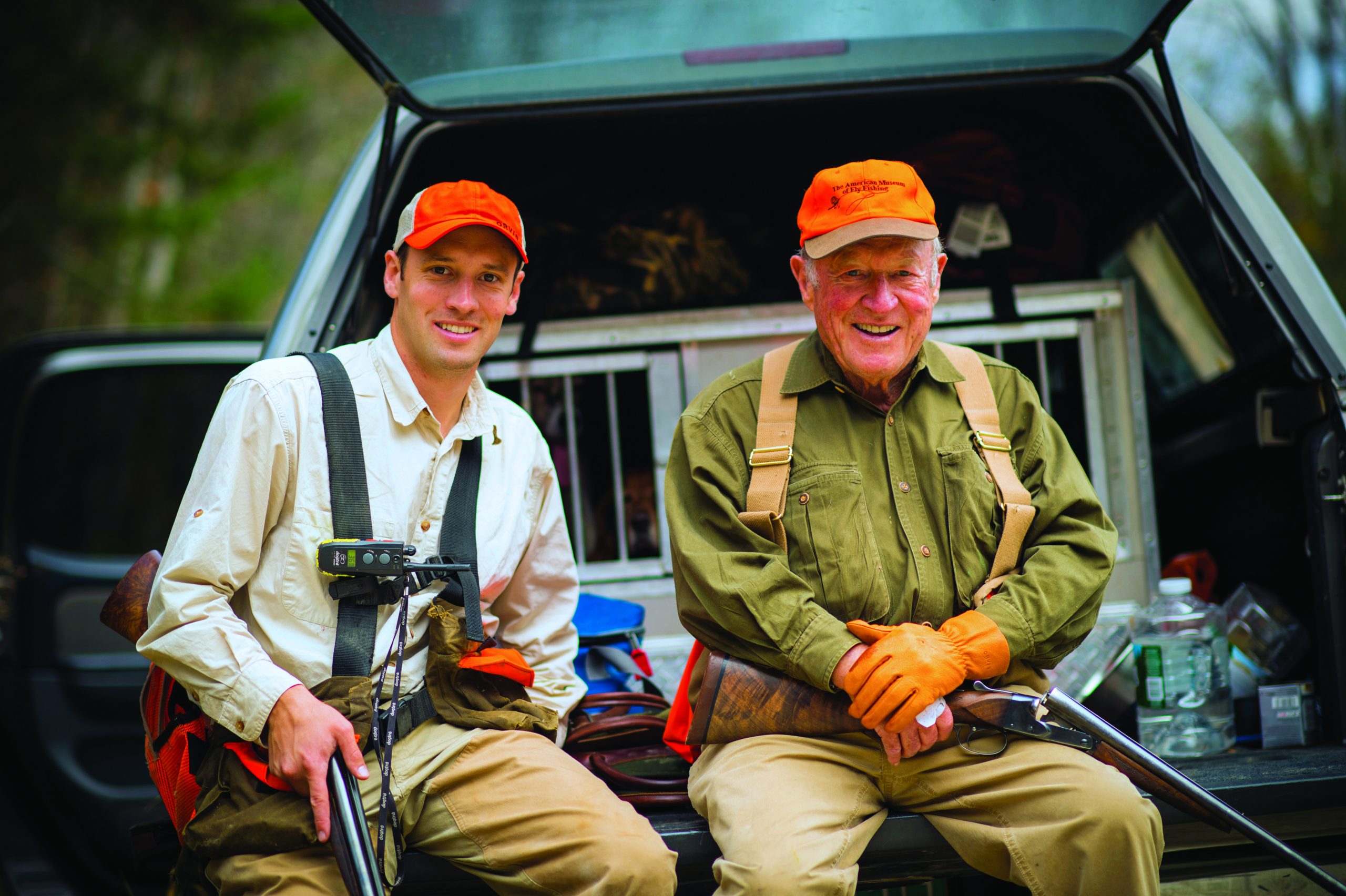 Leigh H. Perkins bought the Orvis Company in 1965 and spent the next 30 years of his life building the company to what it is today. The following is a press release from Orvis on the passing of Perkins on May 7, 2021.

Leigh H. Perkins, who purchased The Orvis Company in 1965 and over the next three decades transformed it into one of the country’s most respected sporting, apparel, and dog brands, passed away at the age of 93 on May 7, 2021, in Monticello, Florida.

Although he built his reputation as a shrewd businessman and marketer, Leigh was most at home wading in a trout stream or walking behind a bird dog in the field. He was a lifelong outdoorsman who hunted or fished more than 250 days a year into his 90s, and his reverence for nature was at the heart of his drive to conserve land and water resources for future generations.

Born in Cleveland in 1927, Leigh was raised by a mother, Katharine Perkins, who was a dedicated angler and hunter at a time when there were few women who engaged in the outdoors. It was she who fostered his passion for nature and the sporting pursuits, and these experiences shaped his desire to conserve woods and waters so that others could enjoy them. “She taught me to fish and hunt, and she was my principal sporting companion for the first 18 years of my life,” he wrote in his 1999 autobiography, A Sportsman’s Life: How I Built Orvis by Mixing Business and Sport. Together, they caught bluegills from farm ponds, cast to cutthroats in Montana, traveled to the Atlantic salmon rivers of the Gaspe Peninsula, and shot grouse, quail, and ducks.

Although he was born into a wealthy Midwestern family, Leigh chose to make his own way in the world after graduating from Williams College in 1950. He started as a rodman on a survey crew in the iron mines of northern Minnesota, working his way up to foreman before taking a job as a salesman for Cleveland’s Harris Calorific, which made gas welding and cutting equipment. It was during this time that he discovered the value of listening to the needs of customers, which would serve him well as he built Orvis. As Leigh once told his grandson, Simon, “You always learn more by listening than by talking.” Leigh often spent time taking phone calls and reading customer letters to ensure that he was serving their needs, a practice that continues at Orvis today.

The idea of mixing business and his sporting passions first occurred to Leigh when he began looking for a company of his own to build. He had been a customer of the Vermont-based Orvis since his college days in western Massachusetts. After a nine-month courtship with then owner Dudley “Duckie” Corkran, Leigh closed the deal on the first day of 1965. He was a hands-on owner, serving as president, merchandiser, art director, product-developer, and whatever else needed doing. His attention to detail was legendary, and he personally approved every item in the catalog.

Over the next 27 years, Leigh would grow the company—founded in 1856 by Charles F. Orvis—from a niche business with 20 employees and $500,000 in annual sales to a mail-order and retail powerhouse with more than 700 employees and sales topping $90 million. Along the way, he was a pioneer in both business and product development. Among the first to capitalize on changes in the direct-marketing world, Leigh made the Orvis catalog a household fixture from coast to coast and opened Orvis retail stores in cities around the country.

Leigh prioritized products that solved problems and enhanced a person’s time on the water or in the field. He introduced the first retractable zinger to hold fly-fishing tools and the first Gore-Tex rainwear. Orvis graphite fly rods were not the first on the market, but they were better-designed and more durable than competitors’. Leigh’s love for working dogs led to perhaps his biggest coup, the Orvis Dog Nest bed—the first of its kind sold in the U.S. in 1977—launching an entire category for the company.

In 1966, Leigh launched the world’s first fly-fishing school in Manchester, Vermont, teaching 150 students the basics. He added a wingshooting school several years later. “It was one of the first outdoor schools of its kind,” says Tom Rosenbauer, Orvis’s chief fly-fishing enthusiast and one of the sport’s best-known teachers, anglers, and authors. “Kids got that kind of stuff at summer camp, but it was groundbreaking for adults and the industry.” The company now offers free instruction to more than 15,000 would-be anglers per year. As his grandson Simon explains, “His passion for education and sharing has grown over the years into an important Orvis legacy of increasing access and participation in the fly-fishing and wingshooting communities.”

For Leigh, the importance of handing down family traditions—in life and in business—to the next generation was always on his mind. As his mother had done for him, Leigh passed on his passions to his children, who are all keen anglers, wingshooters, and conservationists. His sons—Leigh H. “Perk” Perkins, Jr. and David—made Orvis their lives’ work. When Leigh retired in 1992, Perk became president and CEO, with Dave working alongside him. Under their leadership, Orvis quadrupled in size. Today, the company is run by Perk’s son, Simon, while his brother, Charley, and his cousin, Hannah, also hold important positions in the business.

Leigh’s fervent belief that anglers and hunters must work to protect those resources that make time in the outdoors so fulfilling became a company ethos and business imperative. In the 1980s, he helped pioneer corporate conservation efforts by donating 5 percent of pre-tax profits to conserving fish and wildlife through organizations including Trout Unlimited, the Ruffed Grouse Society, the Nature Conservancy, and the Atlantic Salmon Federation. “I think this is his greatest and most lasting contribution to the outdoors and the industry,” says Rosenbauer. “It wasn’t a cynical business decision. Leigh did it because he wanted to be a steward of this world he loved. And if the company didn’t make enough profits in a year to support a project, he would reach into his own pocket, quietly, without telling a single customer or even his employees.”

He also served on a variety of non-profit boards, and in 1985, he founded the Orvis-Perkins Foundation, which has donated millions of dollars to habitat and wildlife conservation efforts over the years. “It’s no exaggeration to say that Leigh Perkins was a friend to anglers everywhere,” says Johnny Morris, founder of Bass Pro Shops and long-time friend of Mr. Perkins. “Leigh was a lifelong conservationist. Through his generosity and clear-headed advocacy, he was an inspiration to all of us who care about the outdoors. He was one of our heroes.”

Humble with a self-effacing sense of humor, Leigh once responded to an interviewer who asked what he’d like to be remembered for by saying, “my duck soup recipe.” However, for his dedication and impact on the outdoor world, Leigh received many accolades, including the 1992 Chevron Conservation Award. Nine years later, the University of Minnesota awarded Leigh an honorary Doctor of Laws degree, for “[helping] some of the most prominent and important conservation organizations in the world to modernize their practices, create scientific research programs and achieve their potential for service,” as well as for creating a permanent forest-wildlife research program at the university. In 2016, Bonefish and Tarpon Trust named Leigh Sportsman of Year, honoring his conservation work and dedication to the preservation of the fish and waters he so loved.

Despite all the good he did, Leigh didn’t think of himself as a do-gooder. “No one feels sorry for me,” he once said. “I’ve done exactly what I enjoy most all my life.” It is that example of pursuing the real joy in life that he will be remembered for by everyone with the good luck to have known him.

Video: Tools of the Trade with John Fochetti

A Fly That Lives up to Its Name

Gierach: "You Can't Eat the Scenery"