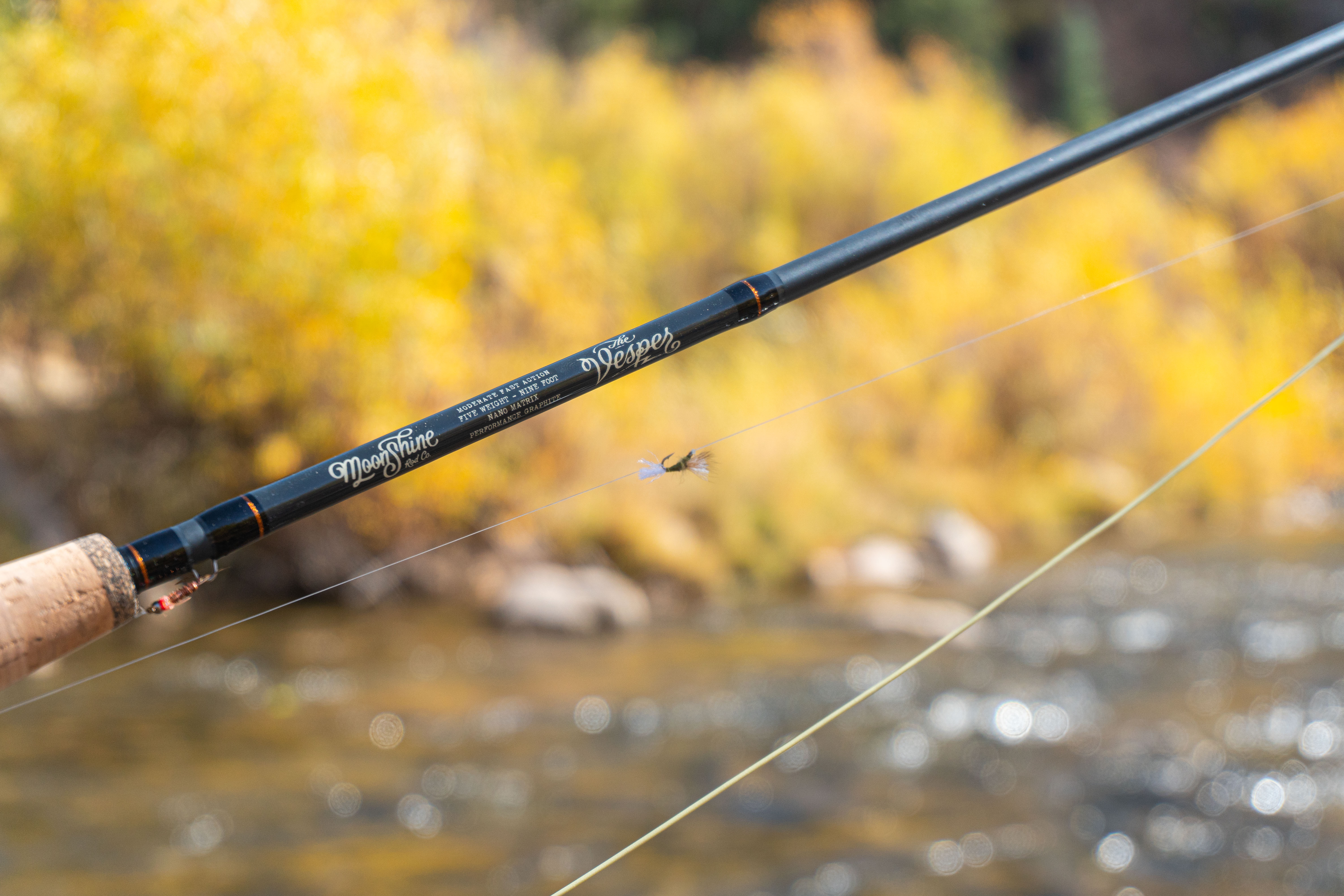 The Vesper is the newest series of fly rods from Moonshine Rods. Available in weights 3-10 and both fresh and saltwater models, the Vesper is positioned as the boutique rod builder’s marquee product.

This is the first rod from Moonshine that I’ve had the opportunity to review, although I frequently see their “Midnight Special” rods highlighted on Instagram. With only Instagram photos to go on, I didn’t really know what to expect when I took the Vesper out for my first rodeo with it.

In all honesty, the Vesper surprised me. I’ve fished quite a few rods from boutique builders over the years, and most of them have been underwhelming.

Right out of the tube, I noticed just how light the Vesper is. Moonshine lists the rod’s official weight at 2.8 ounces, which sounds and feels right. Often, boutique builders like Moonshine have a hard time sourcing blanks that are both functional and light enough to merit fishing with them all day. The Vesper checks off both requirements, and does so very well. 2.8 ounces for the 9′ 5wt version is just as good, if not better, than the weight for some flagship rods of big-name companies. Moonshine attributes the light weight of the Vesper to the new “nano matrix performance graphite” blanks.

Flashy builds are one of Moonshine’s claims to fame, and the Vesper doesn’t disappoint aesthetically. Moonshine built the Vesper on a matte black blank with black thread wraps and orange highlights, creating a rod which, at first glance, looks reminiscent of Scott’s famed Radian. The cork grip has two burled accents, and the cork itself is surprisingly good. What really draws the eye, though, is the “Tobacco Tiger” reel seat. On the freshwater models, this wood catches the eye and demands attention, much in the same way the white NASCAR-style sticker does on the Orvis H3. The folks in Vermont aren’t the only ones willing to go bold with on-the-water marketing ideas, apparently.

Also of note is that each Vesper (and most of the other rods from Moonshine, as far as I can tell) ship with an extra tip section. Seeing as tips are the section of rods most often broken, this is a good move by Moonshine to allow anglers to keep fishing their Vesper while a new tip is being built and sent out.

The Vesper has a very smooth, quick action that recovers adequately but dampens better than expected. The fast action will lend itself well to beginning anglers and old-timers alike. The Vesper is well-suited as a drift boat rod, for those long days when you’re throwing big flies, or fighting strong wind.

The Vesper lays line down softly, and does so accurately as well. In the traditional trout distances of 20-50 feet, I didn’t really have to work too much to get the Vesper to put my flies where I wanted them.

As is common with fast-action rods, the Vesper has a ton of reserve power. Whether you’re trying to turn big fish, turn over long leaders with big flies, or need to punch line through a stiff headwind, the Vesper has the power to get the job done. 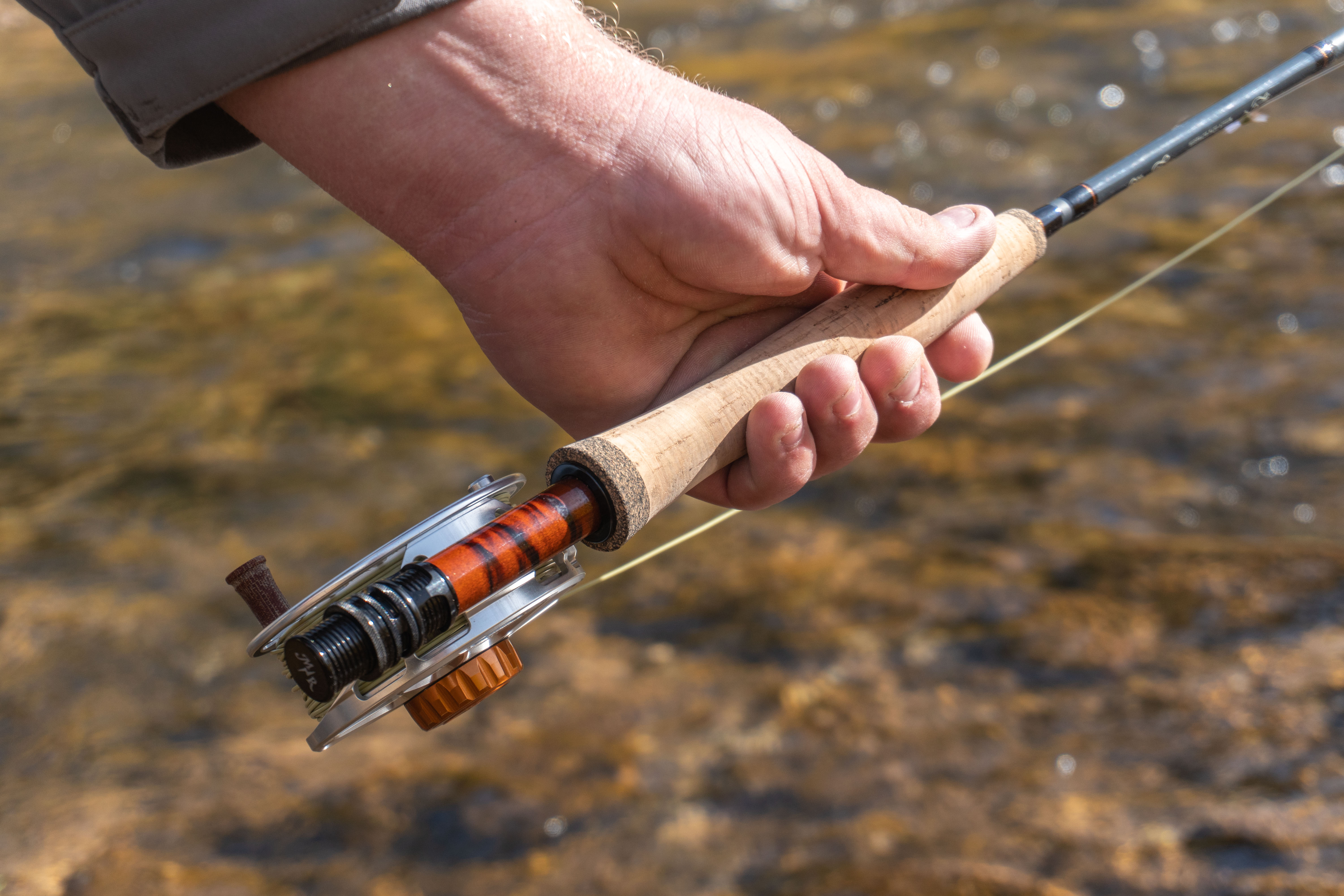 Where Does the Vesper Stand?

The rod market is outrageously saturated right now, which means companies have to get creative in both what their unique value proposition is, and how they communicate that to consumers. Some companies chase bottom-of-the-barrel pricing, hoping to clean up on thin margins. Other boutique builders price their rods well above the big-name companies, hoping to attract a certain class of buyer.

Most folks, though, tend to put their rods in that $300 – $500 range. The market tells us that’s a fair price to pay for fly rods, and the Vesper retails for $449.00. What sets it apart from the similarly-priced models from big-name builders is the Vesper’s custom build. The cork burls, and the ostentatious reel seat, scream “unique,” but that’s just to get attention. As I’ve indicated here, the performance for this rod is on par with what I’d expect from a $450 stick, but you only know that after the build quality catches your eye.

That’s what Moonshine has done well with their Midnight Special rods, and they’ve carried that philosophy over to the Vesper. I do think the Vesper is a bit faster than most rods priced at $450, and it’s certainly lighter. As far as mid-priced rods go, the Vesper is worth serious consideration if you’re in the market for a new rod.