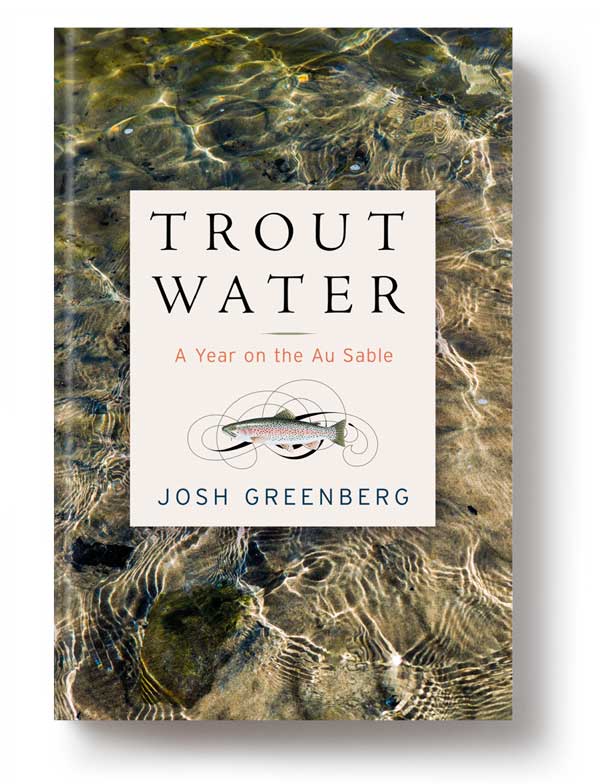 When you’re waiting on the phone call that will inform you a friend has died, the only place I know to go is the river. It was evening when I arrived, and that’s when you look for rising trout on the Au Sable in May: when the river is silver with sky reflection and the edges are dark beneath the cedars.

Okay, I thought. So maybe there’ll be some fishing to go with the phone call. Even to just see a trout rise would mean spring. I had a box of Hendrickson spinners I’d tied over the winter. There’s not much I like better than trying out a bunch of winter-tied flies on the first rising trout of the spring. There were no trout rising yet, and there wouldn’t be many in the high water. Many of the trout would be full with washed-in earthworms. The cold water would make them sluggish. But just one evening rise can alter the worldview of a spring-starved angler.

I stood and began to hunt slowly upstream, walking the bank. The river was high and fast, but smooth. The Au Sable is the perfect canvas on which to paint a rise. I saw no rises, however. I saw hardly any life in any form. There was no one in the valley. No one. The river cabins stood empty, their owners downstate or somewhere south, and the cabins had broken branches on their roofs and in their yards, detritus from the long winter. There were no cars or barking dogs or canoers. The river was one cloudburst from being blown out. It was still so brown and quiet, the trees still barren; you’d have thought it was a warmish November evening.

I was determined to find a rising fish. No blind-fishing of any sort: rising trout or bust. I snuck through the flooded shore grass and alders, hunting the surface for rings. Further up the flooded bank, I had to pick through some beaver work. I’d trapped a beaver from this same bank this past winter and used the fur to tie the body of the fly on my hook keeper. I try to examine life, but not fishing and hunting, which I love. It is not an addiction. The examined life is preferred, but it’s dangerous to examine love.

Tiger Woods said once that he could will in a putt. In his prime, I think he could. Sometimes I think I can will a rise. I can’t. But when it happens, it feels like I made it happen, even though I’ve unsuccessfully attempted to will tens of thousands of others.

This evening, I willed a trout to rise. It was just above the upstream corner of a submerged dock, at the tail of a seam that has always been a solid-gold, early-season dry fly spot. The rise was purposeful—and though I watched it happen, it seemed I’d somehow caught the tail end of it. I thought of all those astro-types scanning the cosmos for the afterimages of enormous events. A star exploded ten million years ago and they just now saw it. That’s like the rings of an early spring rise, if you ask me. A silver dollar-sized bubble spun in the eddy by the dock . . . the last known proof of, what to me, seemed a cosmic happening. My eardrums picked up my heartbeat as if I needed proof of my excitement. The trout fed again. Carelessly? Maybe. But it had pushed toward the bank, away from the seam, closer to the small backwater spinning above the dock.

Maybe even in the backwater. That rise was followed by one back in the seam and three feet upriver, nearer the original rise. It threw a beautiful curved bow wave. Left a nice bubble.

I decided to fish from my knees, perhaps unnecessarily, as the trout was forty feet away and unlikely to spook from my standing there. The Hendrickson spinners humped along their eggs for upstream deposit, but there weren’t too many bugs and I didn’t think there could be many on the water. This evening-rising trout was a rare find indeed; the sort of fleeting treasure—rainbow, meteor—that can be possessed without actually being captured by hook or camera. It belonged to no one, but it was all mine.

Excerpted with permission from “Trout Water: A Year on the Au Sable” (Melville House, March 2021, all rights reserved)