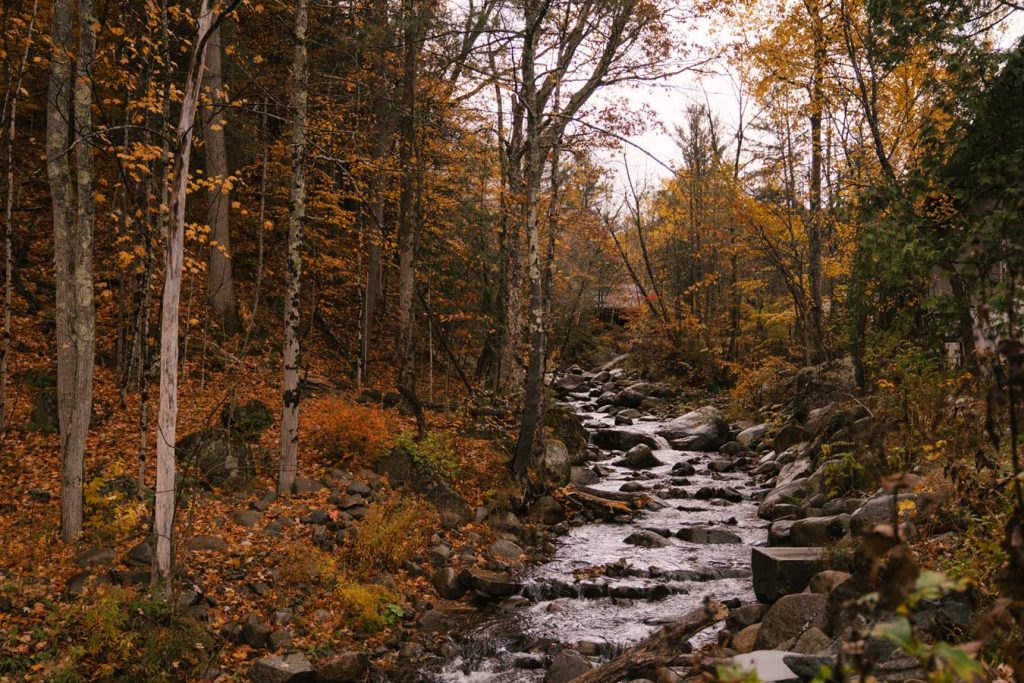 The skies have remained gray all week. They match the landscape as well as my mood. Juncos flit among the cedars like the first snowflakes of the winter that looms ahead. A few sparrows shuffle over the lawn. They’re searching for seeds scattered by the chickadees and titmice visiting the feeder that hangs from a metal post outside my window. Even with the window closed I can hear their chirps as they complain about the cold, damp weather. The bird song lures me away from the warmth of the woodstove, and after gathering my fishing gear, I find myself making the short drive to Bonnie Brook.

I roll down my window upon approaching the narrow bridge that spans the little stream and watch the current slide over fist-sized cobble in colors that range from dun to cerulean and from sienna to rust. A doe and her yearlings graze in a meadow beside the bridge. When I pull the vehicle off the road, they look up, the young deer sidling closer to their mother.

The pin oaks and beech trees still cling to their withered leaves, but those fallen from the maples and silver birch, hickory, and ironwood crunch under my wading boots as I amble down the narrow path that weaves through the forest. During that first season, I’d tramped along the tiny stream’s banks while rarely finding evidence of fish. There was that set of ripples spied from the corner of my eye, and the occasional streaking shadow as I waded around a bend, but not much more to verify their presence. It took an entire season before meeting my first brook trout, and although I made the acquaintance of the rainbows soon thereafter, it took a few years before the first brown introduced itself.

Over time and with much patience, I eventually learned that although the stream’s ankle-deep riffles are shallow, they provide aeration for the slightly deeper runs, where palm-size brook trout may seize a wet fly drifted with care, and if a dry fly is cast with skill, a chunky rainbow might splash through the surface. Then there are those few thigh-deep pools, dark enough for a resident brown trout to spend the daylight hours brooding over its future.

This afternoon, the stream is dark, cold. It does not beckon. I’d hoped for a mid-afternoon midge hatch, maybe a few blue-winged olives, perhaps some late-season stoneflies, but the caddis larvae lie snug within their stick houses while mayfly and stonefly nymphs have burrowed deep into the bed of the stream.

I knot a soft-hackled Hare’s Ear pattern to the end of my tippet. After a short cast, the fly sinks from sight, tumbling soundlessly around a boulder, its shoulder mottled with bright green lichen. Although I imagine hackles undulating enticingly as the pattern drifts naturally with the current, the trout are unimpressed.

Working through a set of riffles, I pull back, but feel only the lifeless tug of a submerged leaf. Without a hatch the trout remain lethargic, unwilling to come out and play. Even so, what is fishing if not an exercise in hope.

Ninety minutes later I remain chilled despite a flannel shirt and wool vest. My joints creak, muscles burn. I follow the stream’s course as it falls in a series of plunge pools surrounded by a forest populated primarily by hemlocks. The tops of a number of these stately trees have split from their trunks creating a hodgepodge of timber scattered across the forest floor. I’ve read that the wooly adelgid is attacking these trees that have sheltered the upper reaches of the stream for generations. If not brought under control, the exotic pest will be the demise of the forest. As the hemlocks go, so go the trout. For its the shade that keeps the temperature of the stream cool enough through the summer months to sustain the population of wild fish that inhabit its waters. 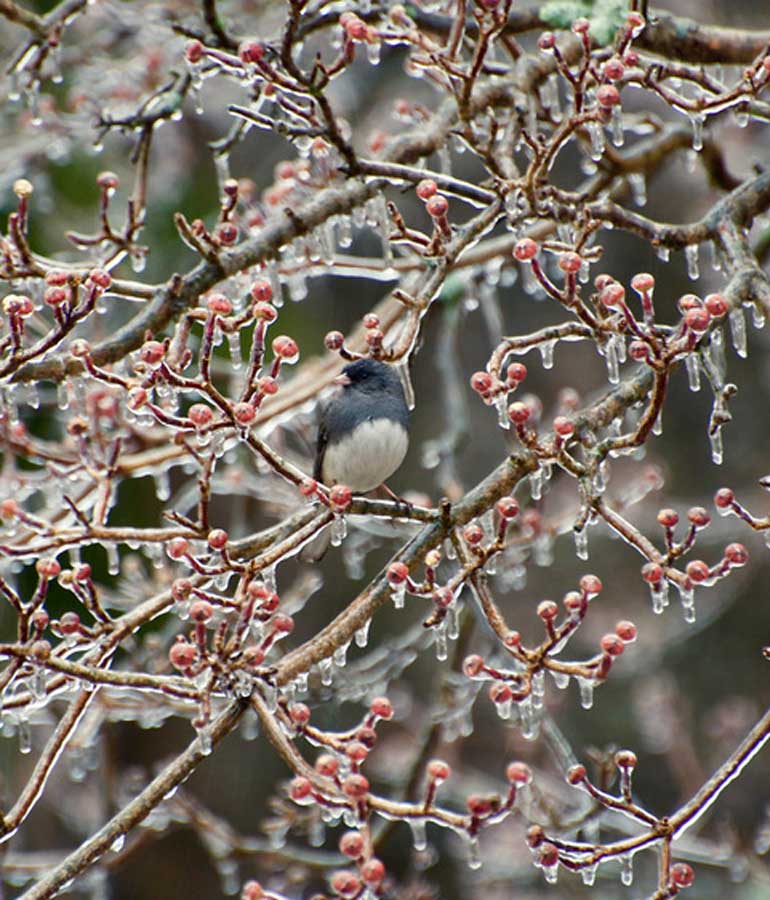 It’s impossible to navigate through the spindly branches of the fallen limbs and I’m forced to hike up and around the massive deadfall. Rhododendron, and to a lesser extent mountain laurel, spread down the sides of the hills as I pass farther down the stream.

After more than forty years, I’ve come to know this brook as well as an angler can know such things. Six miles from its origin, a pond nestled in the foothills of the Kittatinny Mountain Range, to its terminus at a well-known river that drains four states, the little stream flows down the hemlock-studded mountainside, eventually passing through fallow fields once farmed by colonial farmers, then falling faster through a forest ravine, its current slowing through the final mile or so as it follows a serpentine course through swampland before flowing in the big river.

I remember a time before the fall of the hemlocks when its headwaters remained cool through July’s heat and August’s humidity. Barberries and brambles, wild grape, and rose bushes sheltered its banks as it passed out of the forest and through fields of high grass and meadows brightened in summer by daisies and black-eyed Susans. The untamed tangle of thorny branches and vines held the sides of the stream in place, the bushes discouraging erosion, and yes, made my backcasts a study in frustration. But over the last few summers Bonnie Brook has seen less rain than in past years followed inevitably by excessive flooding that has scoured the banks, causing them to collapse. Once unheard of in the northeast, mircrobursts have leveled sections of the stream bed, lessening the ability of the brook to hold in water deep enough to sustain trout.

Before entering the swamp, the current twists through a narrow flume where it falls from a height of more than twenty feet into what had once been the stream’s deepest pool as a result of an oak tree that had fallen across the back of the run, its massive trunk creating a formidable dam.

Now, as the afternoon’s muted light wanes, I stare down from the top of the falls to find that the pool is less than half its normal size.

Although sometimes difficult, I’ve learned to accept change when caused by the natural course of events, but descending into the ravine, I discover that the ancient tree is gone. Looking closer, I find marks where a chainsaw has scarred the remaining portion of the oak’s trunk. I ask myself, why? (Upon coming upon a park ranger later in the week, I’m told there was fear that if the tree had been swept away, the resulting downstream discharge could cause harm to those who frequent the trail leading up to the pool.)

Like wisps of fog, memories slip over the pool’s surface as wet snow drips down from the ashen sky.

There was that time I came upon a black bear seated upon a log. It was June and the trout were as frisky as fawns. I’d waded within ten feet of the bruin before looking up from the stream’s surface. The bear was seated with its broad back toward me, its legs apart while chewing on red caps plucked from a tangle of brambles. After slowly backing away, I spent the remainder of that afternoon staring over my shoulder.

I recall another time, when I jumped into the air and turned tail, all in one motion, upon hearing the rattle of a snake in the high grass of summer. There was no more fishing that day.

I’ll not forget the trout I named the Old Groaner. For many seasons, whenever I approached, the fish streaked from its feeding lane to hide under a boulder. Upstream casts failed to bring the trout to the surface, but I’ll always remember the anticipation, when changing tactics, I slipped my fly downstream, letting out line, all the while waiting, waiting, waiting, until the cagey old fry-of-a-brown-trout rose to sip in the #20 Griffith’s Gnat at the end of my tippet.

There have been many fish, some big, most small. All brought me joy, but there’s was one that stands out among all the others. It was a brown trout, one that I stalked over two seasons. It resided under the falls, its domain the pool that before the amputation of the log had been the widest and deepest of the entire stream. I remember losing that fish when it slipped the hook, my line springing back in a hopeless confusion of tangles as a wood thrush called in the gloaming, and how the following year, on a warm evening during the first weekend of summer, with caddis swarming over the pool’s surface, that fish once gain rose to grab my fly from under the fall of water. How we fought, holding my breath when it streaked back under the foam caused by the falling water, cursed when it tangled my line in a pile of submerged branches, and again when water slipped over my hippers as I slid my arm down to dislodge it, and how near the end, as darkness fell, I muttered a desperate prayer, until the two of us lay exhausted, the fish finning in the shallows, me lying upon the damp cobble.

Although wild places have a way of jealously guarding their secrets, I’ve listened carefully whenever the little brook whispered in my ear. Of all the lessons learned, perhaps the most important is the fragility of the fish struggling to survive between its banks. It would be easy to remain in the past, but I fear for the trout of this little mountain brook. The damage it’s sustained brings to mind Harry Plunkett Greene’s evocative Where The Bright Waters Meet. Like the trout of the River Bourne, I worry that the wild fish of my little stream will succumb to events beyond their control.

In his book, Greene describes how his “silver trout” thrived during the first few years of the twentieth century until they were unwittingly crippled by the introduction of hatchery fish, soon thereafter to vanish altogether as the result of overfishing and the runoff from tar and salt “needed” to maintain the local roads beside the chalk stream.

Now, I’m an angler, at my best when wading through running water. There will always be drought and flood. The life of a trout will never be an easy one. But if it will give these audacious fish a fighting chance, I’m all for reducing fluorocarbons, fighting the infestation of imported pests, and at the very least, leaving streams and their inhabitants to their wild nature.

As I trudge back up the trail, the snow continues to fall, a bit harder now. It turns to ice by the time I reach the truck. The deer are gone. Beside the meadow across the road, the branches of a dogwood tree appear to shimmer like so many silver trout captured for one last moment before passing into time.