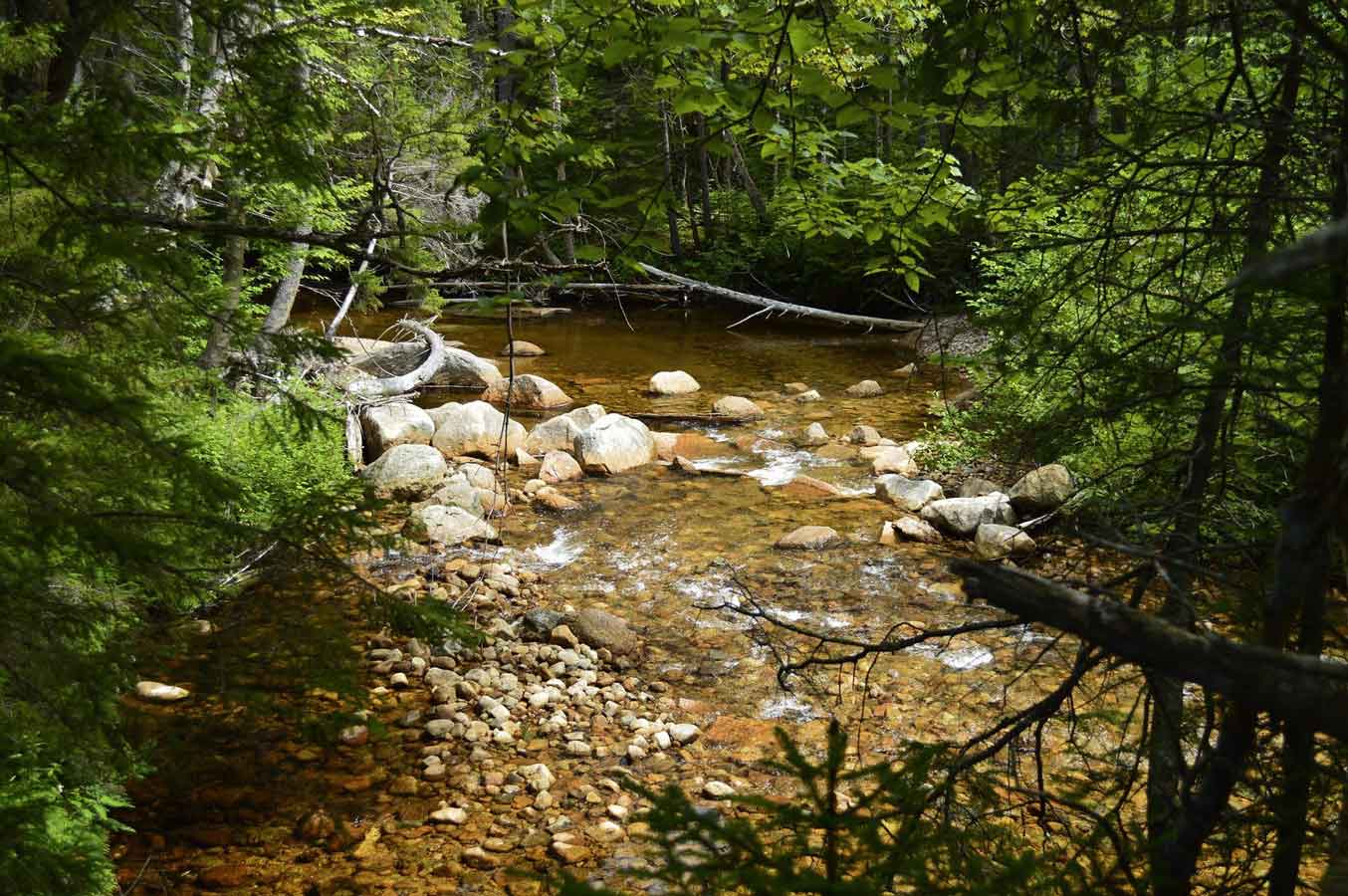 I’m hiking down a path, one that winds along the edge of a field choked with brambles and wild cherry trees. Beside the trail, birds gossip about the salacious behavior of caterpillars that writhe within their gauze-like chambers. My attention turns to the complaints of a red squirrel, the little rodent scolding me from atop a rock wall. As I move on, the thorns of an unruly rugosa pull impatiently at my shirtsleeve.

Slipping under a canopy of hemlock and hardwood, I walk through deepening shadows. Climbing higher, I follow the ridge trail, its rock and lichen sides hidden by mountain laurel. The laurel’s white blossoms are in full bloom on this June afternoon. Wild rhododendrons sprawl down the side of the ravine. Their flowers are biding their time, waiting for July to open. As the sun slips below the western rim of the hills that encircle Bonnie Brook, the heat of the day recedes, but not the humidity. By the time I descend into the coolness of the glen, perspiration has soaked through the back of my shirt.

The trout season begins under gray skies and hard rain, then progresses through a month of pleasant temperatures when the fish are easy to find and the sweet scent of barberries, honeysuckle, and wild rose hangs above the banks of the little stream. The waters of this inconspicuous rill flow high and fast through April and May, but begin to slow as June approaches. By Father’s Day, the raucous laughter of early spring slows to a chuckle.

The creatures of the forest go about their secret lives, unconcerned by the sound of my footfall across the earthen trail. My pace quickens as I draw closer to the current. Below, a vole, (or is it a shrew?), scampers past my boot.

The calls of black-and-white warblers sound like squeaky wheels in the tops of the trees. A yellowthroat flits through the streamside brush. The bird’s notes — witchety, witchety, witchety — seem to tumble down with the current. A redstart snatches an insect out of the heavy air as it darts from one bank to the other. Watching the blur of black and orange feathers, I nearly step on a garter snake. Like a yellow ribbon abandoned upon the path, the snake’s body lies in long curls, soaking up the warmth as another sun-streaked afternoon slips into shadow.

The path widens, more or less level as it follows the course of the brook. Around a bend, I startle a Great Blue Heron. As the gangly bird takes flight, its legs remind me of some knobby-kneed septuagenarian.

The water is cool against my hip boots when I wade across the stream. On the far bank I step around boulders, over roots, and the occasional fallen limb. Careful to carry my little cane rod with the tip facing backward, I stop to catch my breath.

A few minutes later, I arrive at the pool. It is the largest on this little brook that I’ve come to know over the years. While I sit on a moss-covered log, a dragonfly interrupts its search-and-destroy mission to hover inches from my face. Drawing a neckerchief from the back pocket of my jeans, I dip the thin blue cloth into the pool. The cool damp spreads down my neck and moistens my shirt.

Still seated, I scan the pool’s surface for signs of trout. While doing so, my concern for this sylvan Avalon rises like a fish to a fly. Over the years, I’ve found that heat and humidity descend sooner, drought and hurricane becoming more frequent. These extreme weather events hang like a shroud over this woodland stream, with the difference of only a degree or two sounding the death knell for the wild trout living here. I agree with Joni Mitchell when she sings that “we are stardust, one-billion-year-old carbon,” but although our bits may be eternal, their unique combinations are not. Whether guided by the Almighty or nature’s elegant plan, the stardust that has created each moth, mayfly and mosquito; squirrel, snake and spider; bird, bush and brook trout; and yes, even man, comes together for too short a time, making all life on this planet that much more precious.

A caddis crawling along my sleeve catches my attention. Looking closer, I notice others fluttering in the air. A few skitter along the stream’s surface. I pull a pill box from my breast pocket and choose a pattern from the half dozen or so collected in the metal tin—one similar in size, shape, and color to the little bug that flutters above my head like a tiny tan helicopter.

White-throated sparrows that had earlier called for Mr. Peabody have grown quiet now that the light has waned, leaving only the occasional pip, pip, pip of a wood thrush as it scratches among the fallen leaves.

For the next hour or so I cast my fly, now and again feeling the pull of a good fish. As darkness falls, I cast one last time. Twitching the fly when it slips onto the far edge of the pool, I provoke a strike, water spraying outward when a trout, larger than the rest, slashes at the surface. The little cane rod momentarily bends under the strain of the fish, but when I pull back to set the hook, the knot fails, the line springing backward, lying at my feet in an impossibility of tangles.

Climbing back up the trail, I look down upon the pool that shimmers in the moonlight. A field mouse scampers over my boot. The rodent disappears in the leaf litter beside the path. In the distance an owl hoots.