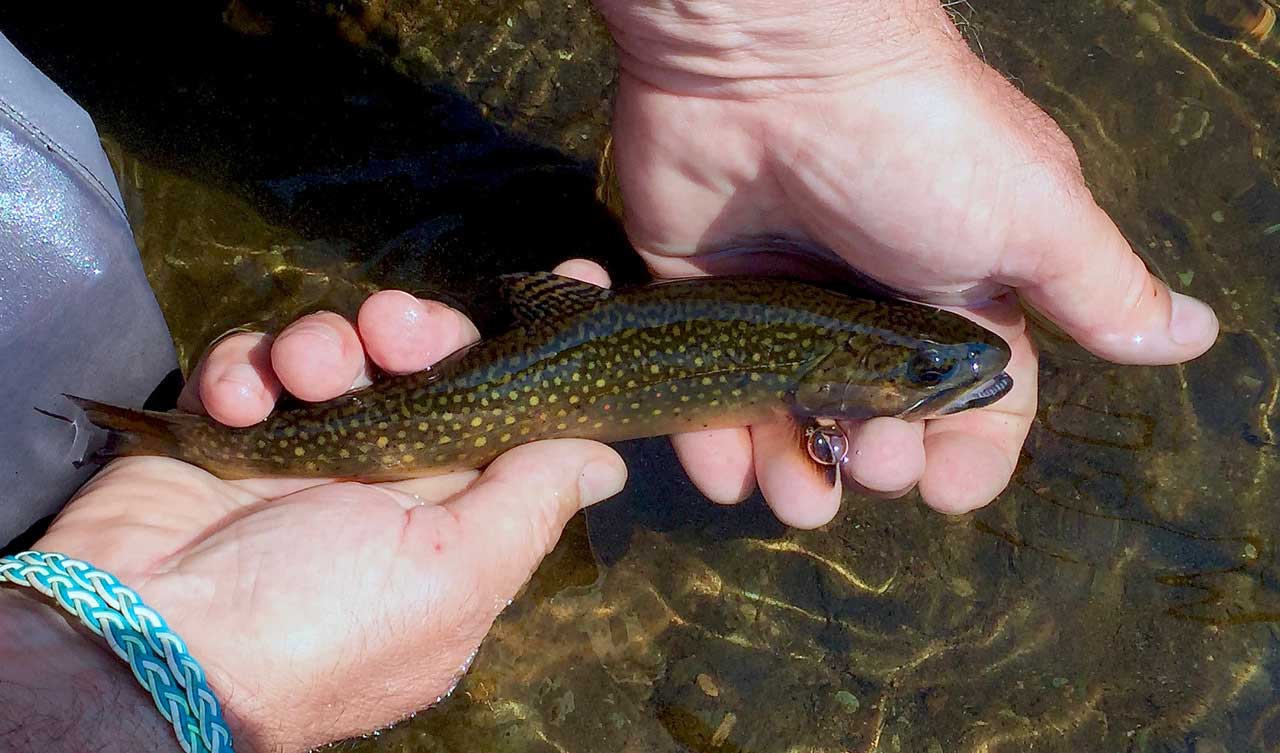 I haven’t seen a fish in Bonnie Brook for nearly three weeks. They’re there, these wild trout, retreating to their secret places, much too skittish to take a fly in the thin water as high summer approaches.

I could drive to the salt, cast heavy streamers to impossibly large fish, or make the long drive to one of the tailwater fisheries, where cold-water releases from upriver dams insure quality fishing throughout the months of heat and humidity. Even so, there is something to be said for returning to a place week after week, month after month, year after year. Something to be said for getting to know a place, its various moods, and for what can be found there, however small and insignificant that something might first appear. Rain began last evening, continuing throughout this morning. The rain is steady enough to raise the level of Bonnie Brook, but not so hard as to muddy the water. I buckle my hippers to a pair of shorts, zip up my Gore-Tex jacket over a T-shirt and pull the hood over a cap, the faded green one with the frayed brim.

The path down to the little stream is spongy. My boots tramp over generations of duff. Like neighbors seated on their city stoops, birds trade gossip, mostly wrens and catbirds hidden amongst the wild roses, honeysuckle, and barberries. The leaves of these trailside bushes are heavy with moisture that splashes across my face when I brush against them. Drawing nearer to the brook, I catch a glimpse of olive-and-yellow feathers flitting amongst a thicket of brambles, and then a flash of orange-and-black wings along the bank that has grown lush with summer grass, ferns, and rushes. Higher up in the hardwoods, warblers sound like rusty wheels while deep within the forest a pewee repeats its familiar notes.

It’s not only the birds that feel safe under the gentle rain. A young deer, its spots beginning to fade, twitches and twists in exaggerated play while nearby her mother calmly sips from the water’s edge. During the second week of May, I watched a fawn no bigger than a poodle wobble beside her mother. Back then, the doe stopped now and then to lick the little one that appeared to be born no more than a few hours earlier. I can’t say if it is the same fawn, but would like to think so.

Rain runs over the tops of my hands, dripping down from the hemlocks and off the leaves of the hardwood trees. It drapes the lichen-covered boulders making them too slick to climb and taps against my shoulders. An occasional bigger drop falls with a loud plop against the brim of the olive cap.

There is always glare on the stream, even on a rainy afternoon, and sweat fogs the sunglasses I wear to better detect the trout that can hide in plain sight. While wiping the lenses clear, I marvel at the rain as it strikes the pool beside me. The circular ripples created by each drop remind me of a moonlit evening in western Maine when brook trout rose from the tannin-stained surface of a wilderness pond in such numbers that Trish and I stared upward wondering how rain could fall from a sky devoid of cloud.

Sliding into the stream, I’m enveloped by water. The current presses against my calves. The rain falls on my shoulders while perspiration wells up from under the Gore-Tex jacket. Wading through the first bend, I disturb a great blue heron that rises from the shadows. As ephemeral as a moment caught by Basho, the stately bird appears to float over the stream before disappearing into the mist.

Water flows where for weeks there has been only damp cobble. Ankle-deep runs develop in what had been slack water. Pools that were sluggish come to life. Like the birds, and the doe and her fawn, during this magical interlude, fish that for weeks were unwilling to rise to a fly, feel safe to do so.

I quickly develop a rhythm, casting without thinking, as if seeing for the first time those hidden places where trout linger. My eyes focus on the edges, along the seams. Darker patches reveal subtle variations in depth. A riffle of no more than a few inches contains a brook trout larger than its friends. Between the submerged roots of a maple tree, along that undercut bank, beneath the shadow cast by the low-hanging branches of a rhododendron, beside a fallen limb lodged between two boulders, trout rise to my fly.

Like children let out from school, the fish are eager for adventure, and I lose track of their number. As many slip the hook as require release. Most fit nicely in my palm while one intrepid soul measures no longer than the length of my pinkie.

The fur and feather that once disguised the little hook at the end of my line is eventually stripped away. With only a bit of thread and tinsel remaining, trout continue to strike. Knowing that as soon as the spate passes, the fish will once more retreat to their summertime hidey-holes, I continue to cast the threadbare fly. For so long as the little stream is willing to share its secrets, I will listen.