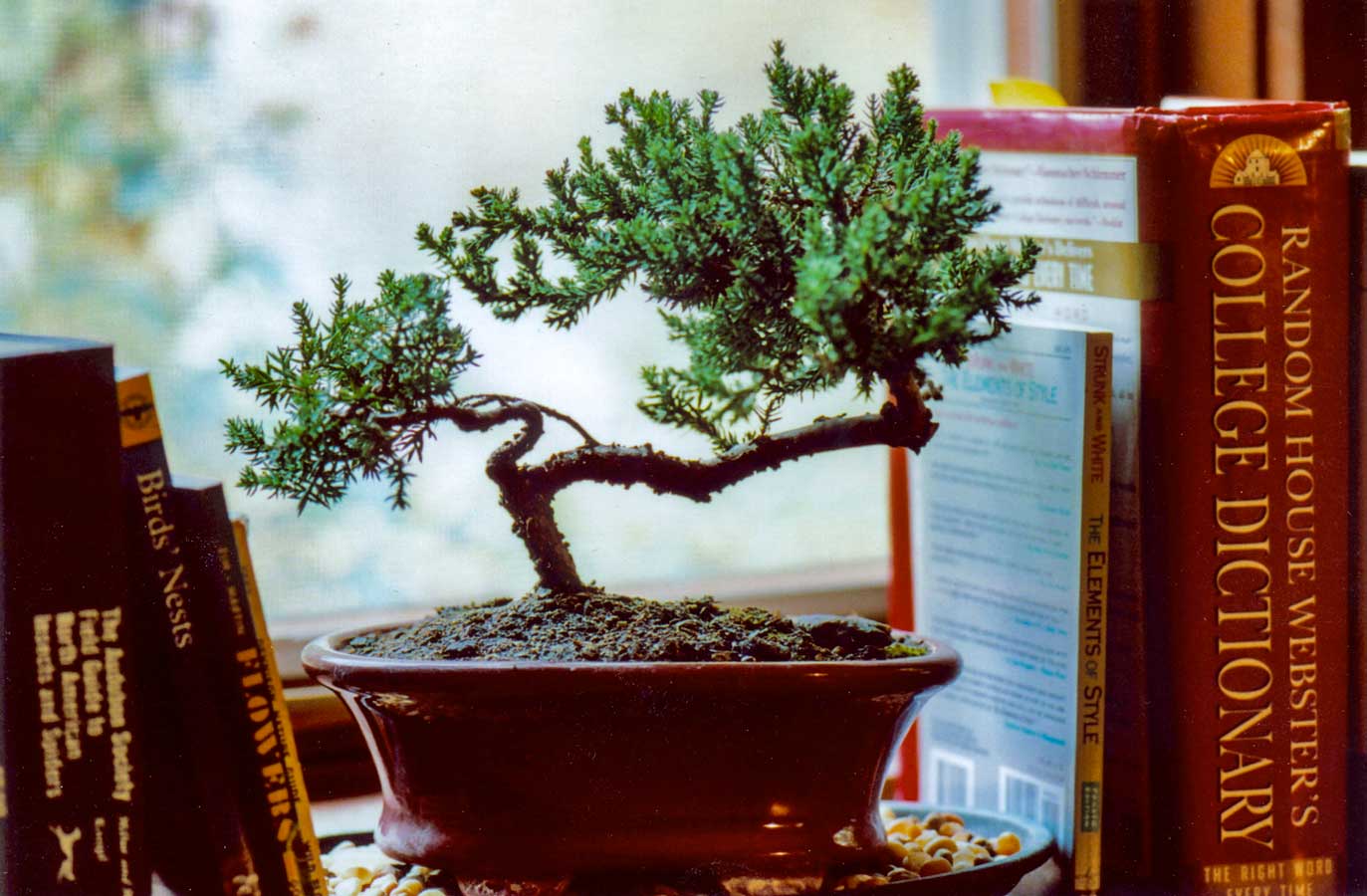 In the daydream, a familiar one that curls softly around my consciousness like a favorite cat, I find myself seated on a large, flat boulder under the branches of a juniper. The tree appears of ancient origin. The type found at the height of a mountain, perhaps along its ridgeline, or this being my daydream, along the bank of a brook, miles upstream in deep forest, spared by beavers, and now nearly forgotten. The juniper’s branches are gnarled, twisted and turned, crippled by wind and weather. Having survived storm and drought, hail and snow, they reach outward to gather in the scant light offered on this February morning.

In reality, this miniature tree grows in a ceramic pot the color of Grade B maple syrup, the rich, dark stuff left over after all the amber-colored Grade A has been siphoned off. The oblong container sits on a bed of pale stones held in a shallow pan of similar shape in front of the window beside the desk where I spend mornings tapping out bits of this and that on a laptop computer. That is, when I’m not immersed in dreams about gnarled trees and mountain streams.

The walls of the room are lined with shelves that hold a lifetime of books. Leaning against the potted bonsai are more books, mostly about birds, insects, and trees while on the other side stands a dictionary and a thesaurus, their covers cracked, the pages beginning to yellow. Between these two steadfast companions is Strunk and White’s slim volume, The Elements of Style, that I purchased for ninety-five cents back in 1965.

I have come to know every crook, cranny, and crevice of the juniper, misting its evergreen canopy each morning before sitting down at the computer. The mound of soil around its trunk is littered with sticks and stones. Under its branches is the rectangular, boulder-like rock that serves as the bench where in my reverie I presently sit, my legs extended, feet crossed at the ankles. My face is turned toward the dappled sunlight that falls from the cold blue sky through the window of the room.

Magalloway, our twelve-year-old black Labrador, lays on his side, the big dog’s head resting on my boot. A nictitating membrane is drawn like a white curtain over his eye. His chest rhythmically rises and falls. His snores are muffled by the sound of the stream’s current. The dog and I have grown old together. Like my beard, the Lab’s breast was once as black as a crow’s feather, but now resembles the top of Bosebuck Mountain after a November snow squall.

Below the boulder where I remain seated, a number of brown trout dimple the surface of the little stream. First one, then another gently rises to sip the tiniest of dun-colored mayflies that float upon the passing current. Leaning against the trunk of the juniper is my bamboo rod—the short one, its cane the color of caramel.

I do not question how it came to be that we find ourselves by the bank of a brook with trout rising under the limbs of a seven-inch juniper tree or how two cedar waxwings are pecking at the tree’s dusty-blue berries, a shower of snowflakes falling on our heads each time a bird alights on a branch.

I have never seen such splendid birds! My attention is drawn from the stark white line around their black eye-masks to the rakish cardinal-like peak of mahogany feathers, and from there through the scarlet splash along their wings. My eyes fix at last upon the blaze of brilliant yellow at the tip of each tail. But it is their breast feathers, an aurora of salmon, pale green, and buff that truly take my breath away.

Over the last few weeks, I’ve been perusing The Bedside Book of Birds by Graeme Gibson, reading a bit each night before turning aside to sleep. Gibson, a writer and birdwatcher, has collected stories, poems, and references about man’s relationship with birds, creating what the book’s cover describes as an “Avian Miscellany.” Last evening, while leafing through its pages, I was struck by a few short paragraphs taken from a novel by Alberto Manguel, wherein upon hearing birdsong, a monk sets aside his copywork and enters a garden to listen more closely. After this moment in paradise, he returns to discover that a century has passed, his friends long dead, his work turned to dust.

When the sun swings toward the west sunlight pierces a bead of moisture trapped between the tips of the evergreen’s buds. Like a prism, the tiny droplet reflects a rainbow of color. The dog and birds are unimpressed, one continuing to snore, the others preoccupied with the berries.

The hatch of little mayflies has wound down. With one exception, the trout have ceased to rise. The one that remains fins tightly against the far bank. The fish, bigger than the others, sways from side to side as it periodically dimples the surface. I count off the seconds—one, two, three, four—watching as the brown trout’s maw slips through the stream’s thin veneer.

Reaching for my fly rod, I find myself once more behind my desk. Magalloway remains at my feet, his large body spread across the rug, his chin upon my moccasin. The sound of the brook’s current has been replaced by the trickle of a filter from the aquarium on a table along one wall of the room. Looking down at the maple pot, I notice that the waxwings have abandoned their perch on the miniature juniper, and are now sitting just outside the window on the snow-covered branches of a red cedar tree. The stream has dissolved and with it, the trout.

I scan the book shelves for dust, but finding none, stare down at the laptop that has reverted to its screen saver.