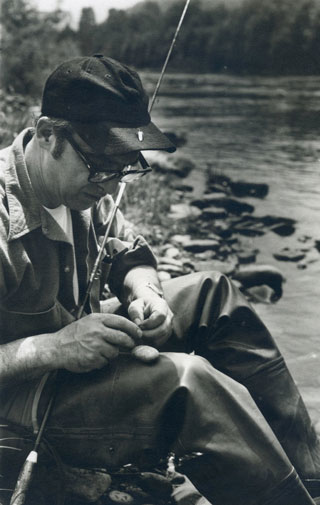 The current is surprisingly strong as I wade through the headwaters of Bonnie Brook. The water is clear, achingly cold. I can see through to the cobbled bottom. This late in the season it is covered with a layer of sunken leaves. Their once bright rusts, reds, and golds have begun to fade. The banks are hidden under a recent fall of snow.

Although it’s nearing the end of December, I’m hoping to find one last fish willing to rise to a dry fly. For this purpose, I’ve chosen a Royal Wulff, a pattern comprised of a cheerful combination of red silk and iridescent green peacock herl, with a white calf’s tail for a wing. What better fly to bring a Christmas trout to the surface?

The air is damp, still. The sky is overcast, dull. I’m wearing a flannel shirt with a fleece pullover. My boots leave prints in the fresh coat of snow. After hiking along the side of the stream for the better part of an hour, I spot a brook trout, my first of the afternoon. The fish fins in place, no more than a shadow against the mottled bottom, but then I spy the white of its maw as the fish’s mouth opens to take a nymph, or perhaps it’s a caddis larva. I bend closer, the snow crunching under my boot. About to cast, the shadow evaporates.

In some ways, my life is like this mountain brook, like the water cupped from its current. Perhaps that is why I fish. For trout, like memories, are elusive. But with skill, a good deal of patience, and even more of luck, they can be held, if only briefly, cool and damp, before sliding back into the darkness. A poor substitute for traveling through time, I know, but we must make d0.

While searching for my Christmas trout, I’ve been wading back through time, trying to remember the very first fish that rose to my fly. There was the huge carp with metallic-like scales and a handlebar moustache that inhaled a dough ball from the muddy bottom of a slow-moving slough. I recall a stringer of sunfish taken with earthworms dug from my father’s tomato garden and the largemouth bass that chased a Hula Popper skittered across the surface of a pond as bats zigged and zagged in the twilight of a summer’s evening. But it’s that first trout taken on an artificial fly that remains as elusive as the fish in this little mountain rill.

Walking beyond a set of shallow riffles, I come upon a short run, deeper than most others this high up. There, in close against the far bank, under the exposed roots of an ancient hemlock, lies the memory I seek.

It’s a few years after college. The Vietnam War has burnt its way through history like flames leaping beyond the grasp of the Fire Service. My hair is long. My language strident. My father does not share my disillusionment with our government, and we’ve had a rough few years.

After the last helicopter had taken off from the roof of our country’s embassy, my father and I declared a truce, spending the night at the Atrium Lodge in Roscoe, New York and the following day on the Beaverkill River. Now, standing on the bank of this little stream, I can remember sitting back in a rocker on the hotel’s stone porch, and later that evening, eating a steak in “Keener’s Pool,” the name given to the downstairs bar. I can recall feeling the presence of those golden-age anglers, men and women like Alfred W. Miller and his wife, Louise, aka Sparse Grey Hackle and Lady Beaverkill.

Having fished with flies for more than a year, I’d failed to raise a single trout, and had hoped that a pilgrimage to the celebrated Catskill river would improve my chances.

On that late-April afternoon so many years ago, my father worked a run a few hundred yards below a pool where I stood watching trout rising to early-season mayflies. Peering into the cold, clear current of Bonnie Brook, I once again watch him work a worm through his hook. Having yet to learn the names of mayflies or their imitations, I was having trouble selecting a fly similar to the dun-colored insects that were struggling to rise from the river’s surface. My father does not understand why I’ve given away my spinning gear. As foreign as my bellbottom jeans and the latest Beatles’ album, he sees fly fishing as just another insult to a way of life he fought a war to protect.

Smoke from the cigarette clasped between his lips rises in a thin ribbon toward the overcast sky. My father raises the bail on his reel, and with a flip of the wrist, casts his line, dead drifting the worm through the adjacent set of riffles. It is a deadly form of fishing, one in which he is adept.

My father is wearing his dark blue baseball cap, the one with a red-and-white Dardevle spoon hooked to the bill. The little lure glistens as the sun momentarily slips through a crack in the wall of clouds.

Trout continue to rise throughout the pool where I’m standing. They’re feasting on the big mayflies that float down the river like a naval flotilla, their gray sails tacking in the breeze. Making a sloppy cast, I resist the urge to look downstream, where I presume my father is catching his limit. A few moments later I strike too soon when a trout rises to my fly. My father eventually catches my eye. To my mind, his nonchalant wave mocks my ineptitude. Anger builds when my fly becomes tangled in an overhanging branch, but on my next cast, the gray pattern is lost in a sudden boil, the hook holding fast to a Catskill brown trout. I look for my father, but the brim of his cap shields his face.

For a moment, I’m back on Bonnie Brook. Snow has begun to fall, big soft flakes that hiss as they touch the surface. Bending to one knee, I look deeper into the little run, find that my father is younger than I remember, younger even than I am now. I watch his worm sweep in a graceful arc toward a pod of fish, which on that day, in that water, are ignoring worms, even those drifted with consummate skill and patience, while in the pool above him others choose to rise to a bushy fly cast in haste and with little skill.

The snowflakes are smaller now. They begin to stick to the sleeves of my fleece pullover. Lingering beside the little brook, I stare back down into its current where I find that my father has placed his rod upon a boulder, his back leaning against an oak tree. Looking closer, I’m startled to discover a smile spread across his lips, a smile which had been hidden from me for all these years by a dark blue cap with a Dardevle spoon hooked to its brim.

Check out Bob’s website: forgottentrout.com for more about his writing.