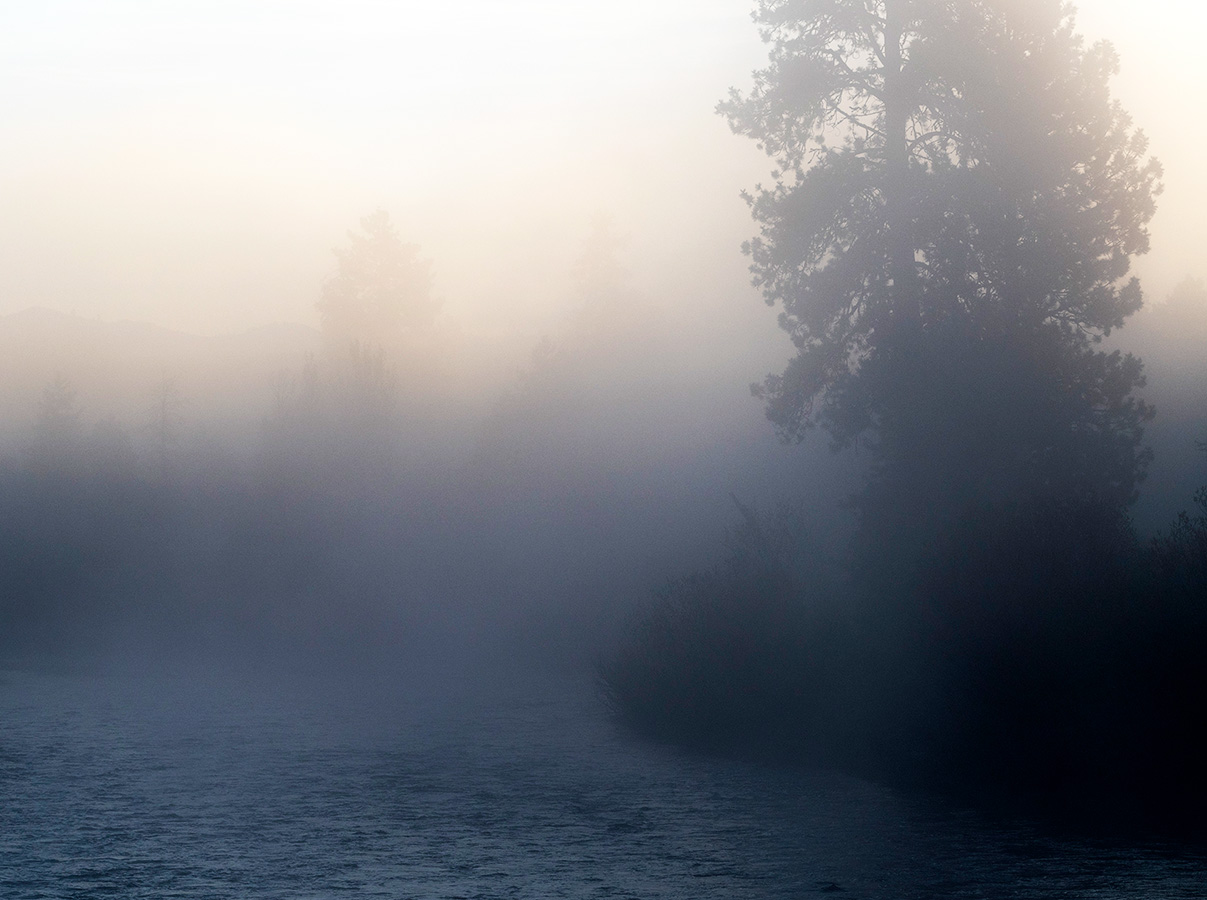 Wading to a gravel bar, to a seam where two currents merge into one, I make a cast slightly upstream and mend the line so my caddisfly will float on the water like a dead insect. A tug comes midway through the drift. Raising the rod tip, I set the hook. It feels like a strong fish as I strip in my fly line and then play the fish off the reel. I bring the fish closer.

But then I realize it is not a fish. It’s a newborn baby, which I net. I take the infant from the net and hold it in my arms. I don’t remember what we talked about. I don’t know how much time passed. But I remember releasing the infant and watching her swim away.

I think about the dream this morning as I walk along the river, mist suspended a foot above the water’s surface, the mountains in the distance with snow on only the highest peaks. The scent of the ubiquitous ponderosa pines, firs, and the green aspen leaves trembling from a light breeze. The water creates a symphony of sounds flowing over rocks, deadfalls, boulders, and riffles, quietly settling to form a pool I will fish.

The mist disappears as the morning sun warms the water. I see sporadic rises from feeding fish and decide I will keep one for dinner. I step into the water, looking at the colorful rocks in the riverbed that provide camouflage for the fish who share the same colors on their skin. I feel the coolness of the water through my waders as I position myself to make my first cast.

I tie a fly to my leader, a favorite pattern that imitates adult caddisflies. The size of my fingernail, the artificial fly like the real caddisfly resembles a moth because their tent-like wings fold back along their bodies with long antennae sticking out from their heads. I test the knot and it holds.

I glance down at my wading boots and see what looks like a fly lying in the river bed. I bend down, stick my hand into the icy water, and instead of a fly am surprised to find that it’s an arrowhead. I pick up the wet arrowhead. It glistens in the morning light, and I wonder how it got in the water. I’ve never seen one in the water before, and I speculate Nimiipuu may have used it for fishing or maybe it missed another animal they were hunting and landed in the river.

I think about what this river, the land, and the fishing must have been like before my ancestors arrived here. And what of the lifestyle and natural world Nez Perce enjoyed before my ancestors removed them from their land and dammed the river? I am here because of our ugly history, and I feel guilt. Maybe that is why I mostly catch and release these native fish in the river.

I stick the arrowhead in my pocket and make my first cast to a subsurface swirl in the pool, knowing I must place the fly a few feet above the swirl. The fish faces upstream, waiting for food to drift to it and will not expend the energy to move far from its position. I make the cast. The caddis lands on the water a foot from where I saw the swirl. A fish takes my fly and strips line from my reel, trying to return to his lie.

Overplaying the fish would kill it if I had planned to release it. This fish will be dinner, but no reason to exhaust it. It is a thrill and honor to catch a native fish, and I need to bring it to my net quickly. After a few minutes, the fish stops fighting for itself or against me. I will never know which. I get the fish in closer and scoop it with my net. It is a big fish for this river, a sleek and brightly colored cutthroat trout with the traditional red and orange on the belly and gills. I tremble at its beauty.

I remove the hook from its lip. The fish pauses for a second and then quickly shoots upstream like a projectile, confirming I did not overplay it. There will be no fish dinner tonight. My connection to the fish was enough, and as I grow older I don’t need to possess or take them. I need to know these speckled beauties are here. But if fish could scream, I don’t think I would ever fish again.

Taking a break from the excitement and my decision, I reach into my pocket for a Clif bar and feel the arrowhead. I take the now dry arrowhead in my hand, what once glistened now dull, and place it back on the river bottom. I look up at a cobalt sky, clouds as white as the river is clear, snow-capped mountains in the distance, grateful for the catch and happy the fish is back in the river. I will sleep under the stars tonight and see the Milky Way. I will dream.