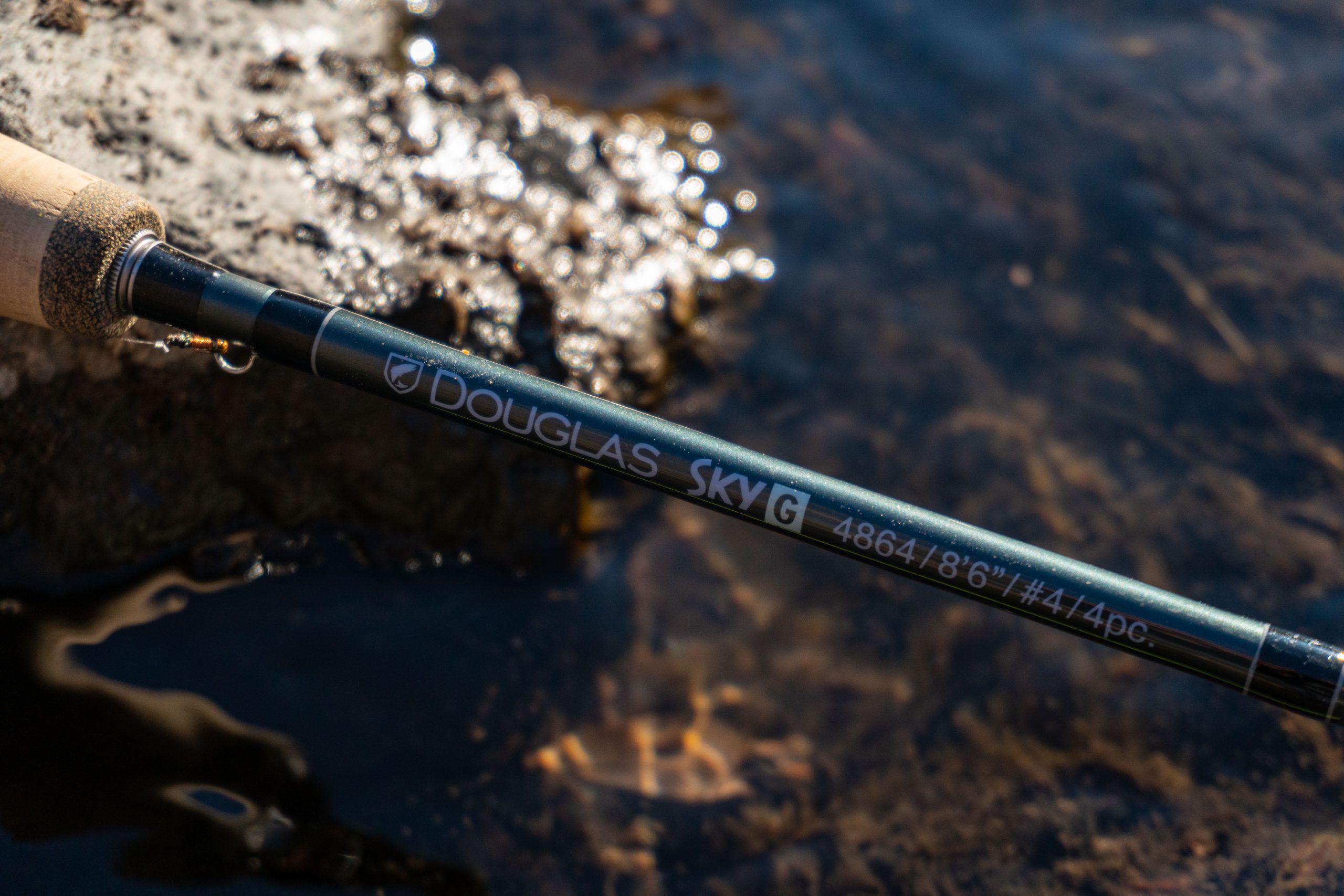 Since I first fished it a year or so ago, the Douglas Sky G 9′ 5wt has become my favorite new 5wt rod. It’s light, it’s powerful, it’s delicate enough to handle tiny flies and tippet – it just does it all.

So, when Douglas announced they were finally expanding the Sky G lineup to include an 8’6″ 4wt, I just had to get my hands on it. I was born and raised here in the Rockies, and I cut my teeth fishing the tiny streams and creeks that flow all through these mountains. A good 8’6″ 4wt rod is worth its weight in gold for the kind of trout fishing I love to do.

With all that in mind, it’s probably easy to understand why I had such high expectations for this 4wt Sky G. Currently, it’s one of only two 4wt Sky G models that Douglas makes, though I’m sure they’ll add other length configurations in the future. But this one – the 8’6″ is the Holy Grail for us trout anglers. If a company can get their 8’6″ 4wt right, then they likely get most of their other rods right, too.

Douglas got it right with their 9′ 5wt Sky G.

The original Sky G 5wt had a perfect progressive action that wasn’t too fast, but wasn’t too slow. With virtually no swing weight, it was an absolute joy to cast.

The 8’6″ 4wt feels the same. Often, smaller and lighter-weight rods from the same builder can feel and cast differently, even if they’re technically in the same rod family. The Sky G, though, feels just like it’s older 9′ 5wt older brother. The rod casts with a crisp decisiveness, and there’s virtually no tip oscillation. The rod dampens almost instantly, and it tracks like an absolute dream. For anglers who need a precision casting tool for picky trout – or the ones hiding in an undercut bank – the 8’6″ 4wt Sky G delivers with aplomb.

The Sky G fishes best with a true-to-weight line. I used two different Scientific Anglers lines, spooled on a 3 1/4″ Hardy Duchess, and found that the SA Amplitude Trout coaxed the best all-around performance from the Sky G. SA’s Amplitude Creek Trout enabled the rod to absolutely throw line, but at the expense of the wonderfully soft presentation that anglers look for out of a 4wt. I’ll take subtlety over power any day in my 4wt, which is why I recommend a good true-to-weight line for this Sky G.

One of the features that made the original Sky G such a hit with anglers was its lack of swing weight. It had the lightest swing weight of any of the 40+ rods tested in the annual Yellowstone Angler 5-weight Shootout, and you notice that lack of swing weight while on the water. It doesn’t matter if I’m casting 20 or 60 feet, but with the Sky G I don’t feel the rod itself moving, so much as I do the line. That’s what you want from a fly rod – and why glass and bamboo have had a resurgence lately, in my opinion. Getting that type of feedback from a graphite stick is just outstanding.

Of course, no swing weight also means that your arm will be less tired after a long day on the water. That’s a bonus, especially if you’re fishing dawn-to-dusk like I do. 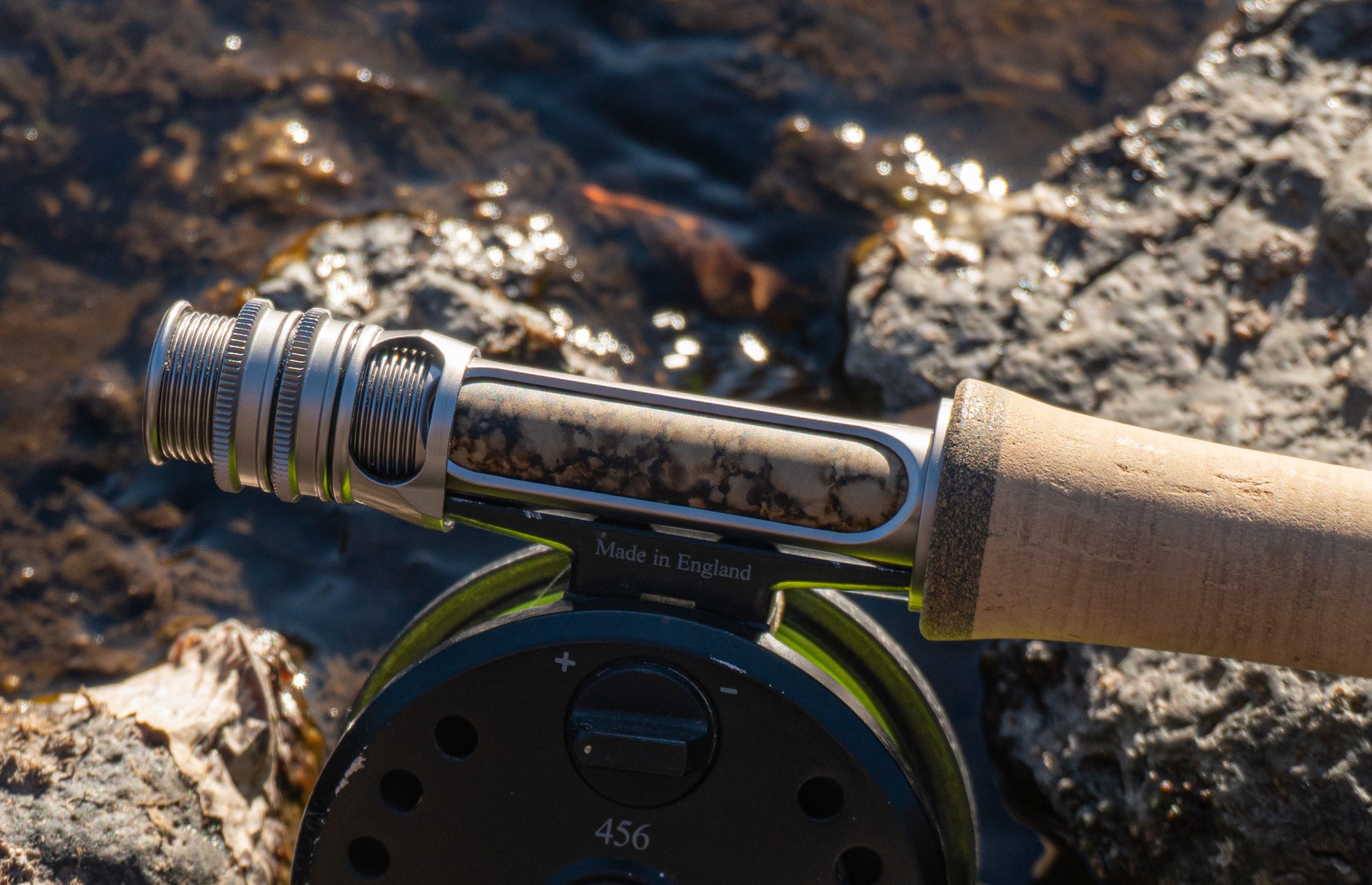 The 8’6″ 4wt Sky G is accurate at all the important trout distances. It really sings in the 15-45-foot range, though you won’t be disappointed if you have to push your flies a bit further. Given that this is a 4wt, though, it’s as accurate as you could hope for. A lot of this accuracy comes from the rod’s light weight, which is a direct result of the new G-Tec construction Douglas used when building the Sky G series. By mixing in G-Tec platelets to the resin used to bind graphite fibers together, Douglas achieves a lighter, more sensitive rod that dampens quickly, resulting in a rod that’s as accurate as its caster.

Of note as well is that the Sky G has a nice, soft tip section that lays line down without spooking wary trout. I’ve been fishing the 4wt on local streams, where the water is low and clear and trout see you coming from miles away. So long as I haven’t made a bad cast, I haven’t spooked any fish away when plopping dry-dropper or nymph rigs down with the Sky G 4wt.

So, the Sky G 4wt already is light, has almost no swing weight, and is deadly accurate. It’s a great presentation tool that doesn’t overpower line and spook fish in situations where stealth is required. What more could you want from your 4wt?

Well, you need good tippet protection in a 4wt, and Douglas delivered on that front, too. While most anglers I know usually don’t fish anything lighter than 6x, you could go down to 8x tippet on this 4wt and not even worry. I like fishing light tippets and small flies, so I try to test the limits of just what a rod will do in protecting that whisper-thin line. The Sky G keeps everything together, so long as you’re able to use your reel and rod in tandem to help slow down big fish.

The Sky G 8’6″ 4wt is everything you want your 4wt fly rod to be. It’s light, has no swing weight, protects light tippets, and is deadly accurate. It’s an absolutely fun rod to fish, which is a factor that’s hard to quantify in a review. The best way to say it is how the late Tom Morgan described fly rods to me before he died. Tom said that any good fly rod should be a good fishing rod; that is, it does its job, and you have fun using it. The Sky G is flat-out fun, and I daresay it’s a rod that Tom would have liked.

I’ve fished and reviewed a lot of rods in my writing career, and it’s rare to have one stand out with such force like the Sky G. In fact, the only other rods that have wowed me this much were the Orvis Helios 3, the Hardy Ultralite LL, and my Winston Boron IIIx. The Sky G is, I think, a rod that will have the cult-like following the Sage XP still enjoys.