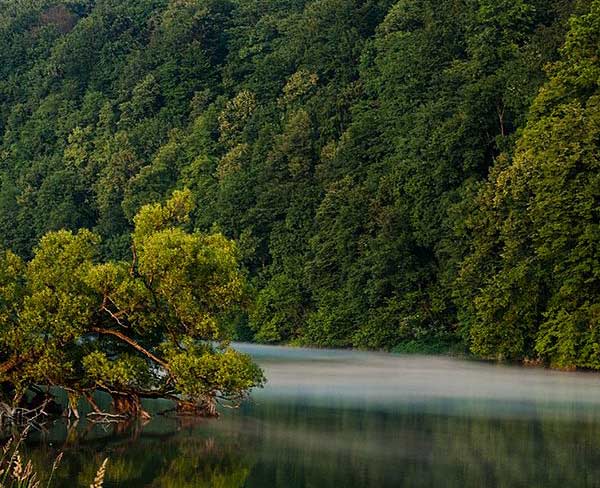 A predictable fog creeps over Poland’s San River on warm evenings in June, providing anglers with their best shot of the day at fish in difficult, technical water. Dave Karczynski photo

A few weeks ago I was preparing to fish the evening hatch on a fertile mountain river.  I shared my beat—an pocky expanse of prime dry fly water some 400 yards long—with one other angler.  We both hit the water at the same time—around 6pm.  Knowing from the previous few days’ experience that my prime window of opportunity would begin at 8:15 and last until roughly 9:30, I prepared to spend the next two hours with low expectations, and with a mind to identifying the best possible positions for where I wanted to be when the magic happened.  I caught several fish—bonus fish, I thought of them—while my neighbor caught one.  After an hour he gave up.  As he walked past me he shook his head and said, “They’re just not biting today.”  An hour later I experienced some of the best dry fly fishing of my life, the action so fast and furious I hopscotched from rising fish to rising fish, often picking out my next target while fighting my last.  When I left the river around 10pm the fish were still porpoising like seals, sleek and black in the purple mountain night.  Walking back through the dark I thought about what my ephemeral fishing partner might be saying at that very moment: “The river was tough today.”  And he would have been right: tough for the angler who didn’t take stock of windows of opportunity and fish to them.  Simply put, one of the best ways to become a more successful angler is to become more strategically aware of those moments when the odds tilt more heavily in your favor.  Some of these windows are smaller than you thought, some larger.  Some are out there still waiting to be discovered.

Hatches represent perhaps the most obvious window of opportunity, but even here there are subtleties to consider, rewards to be reaped by folks who put in the time and take notes.  That’s because when we read about a given hatch structure in a book or magazine (or, for that matter, website), we are usually looking at a portrait of a composite river and a composite bug, neither of which are our exact river, our exact bug.  This is significant because of the complex variables that make up an individual river’s ecology.  Certain rivers I fish—rivers I have sworn blood oaths not to identify more specifically than South of Canada, North of Venezuela—offer hatches far outside the commonly accepted hatch structure and schedule.  Often someone will ask me, “How was your (insert mayfly name here) season this year?”  A part of me will want to correct him: “You mean how is my (mayfly) season?”  But instead I just nod and smile:  “It was good.”

Another window of opportunity is light—but there’s more to it than just day and night, dawn and dusk.  Anglers could take a cue from landscape photographers, who are always anticipating, chasing, and reacting to light. The nature of the opportunities are different, however. Whereas the guy with the camera will be watching for a break in the clouds to let sunshine in, the angler ponders the opposite: when is that mass of cloud cover going to move in front of the sun, and for how long?  Paying attention to these variables and having a plan in mind can help make sure you’re on the best holding water—not traveling to it—for those five precious minutes of low-light in an otherwise sun-shot afternoon.

Barometric pressure is yet another key variable to consider.  Fish like trout have relatively large air bladders; this makes them sensitive to changes in air pressure.  Low pressure exerts less pressure on their bladders, which expand as a result, causing minor to moderate discomfort in the fish.  It’s for this reason that fish often feed heavily before a change in weather (these changes are usually preceded by a wall of low pressure).  Now the benefits of fishing before a storm is old hat, but something you might not have considered is strategizing around more minor, daily fluctuations in pressure.  Michigan big-game hunter Tom Lynch keeps constant track of barometric pressure during a day of fishing.  When it starts to tick up, he makes sure both guys in the boat are up and casting, and casting efficiently: single hauls, keeping the fly in the water, working it all the way back to the boat.  When you’re covering 13 miles of water and looking for only the biggest of the big fish (Tom’s “donkey tape” starts at 28 inches), you need every advantage you can imagine.

Lastly, there are windows we don’t understand yet but that nonetheless exist.  “Sometimes, for no reason whatsoever, it happens,” says Bart Landwehr.  “We’ll be fishing and fishing and fishing.  Air pressure is stable.  Weather’s just like the day before.  The conditions seem perfect but the fish just aren’t interested.  And then—boom—there they are.  For two hours straight, cracking everything that swims.  You want to be there, you need to be there, when that happens.”

One part of the Zen of fishing is to always be ready, every cast. But it’s a mistake to think that all casts are created entirely equal. Being aware of your environment and anticipating windows of opportunities—some of which may last 5 minutes, some 2 hours—is one way to become a more successful and happier angler, all without having to learn a new cast or method of presentation. Now that’s efficiency.