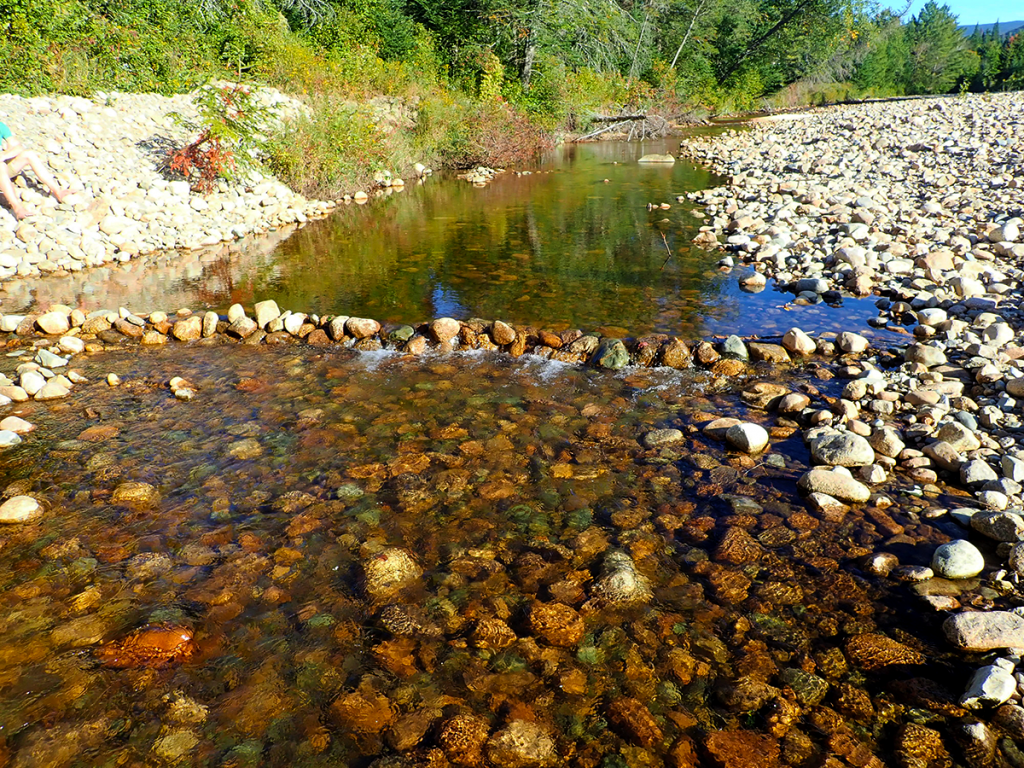 The early stages of a manmade rock dam on federally owned land. — photo by Bob Mallard

Editor’s Note: This is the tenth article in our series on fly fishing conservation.  This series appears with the support of Epic Fly Rods.

As the temperature rises and the masses head to their favorite streams for some relief from the heat, they leave behind a trail of disturbance including litter, rock cairns, and small rock dams. Sometimes they’re built to raise the water level. Sometimes it’s just something to do. This seems especially common, but not limited to, our often heavily used public lands. If you fish small streams like I do, you’ve probably seen these structures and possibly many of them.

For years I walked, or waded past, or stepped over manmade rock dams never giving them a second thought. I figured they were at worst harmless and at best possibly even good for fish because they created deep water refuge in low-water periods. While I’m now embarrassed to admit it, I even built or helped build a few rock dams over the years. Over time, I learned that I was wrong about them and very much so.

A couple of years ago, I received an email from someone who was concerned that manmade rock dams on their home river in north central New Hampshire were “killing fish.” As it turned out, they were a member of a local watershed group. While I had come to realize that rock dams were not a great idea, I asked why they believed that these relatively innocent-looking structures were killing fish. Their response was that they were seeing  dead fish at the dams.

Needing to know more to opine intelligently, I asked where the dead fish were. The answer was, “pushed up against the dams.” I then asked which side of the dam they were talking about. The answer was the upstream side. Based on the information provided I concluded, and I believe rightfully so, that the fish had probably died somewhere upstream. Likely it was the result of incidental mortality at the hands of anglers. They simply floated downstream until they were stopped by the dams.

I also noted that based on what I had found while researching the river in question, the dead fish they were seeing were most likely stocked, and very likely nonnative. Their demise was biologically good for the river as they didn’t really belong there. I told them that the fish were more useful contributing nutrients to the river as they decayed or providing forage for some other wildlife than they were swimming around.

This led to a series of emails and phone calls where we discussed fisheries management in general, stocking and nonnative fish in particular, and although it didn’t go anywhere, it reinforced my belief that we really need to do more to educate water-quality groups about fish. Just because the kids can swim there and choke down a bit of water without getting sick doesn’t mean that a body of water is healthy, but that’s a story for another day. 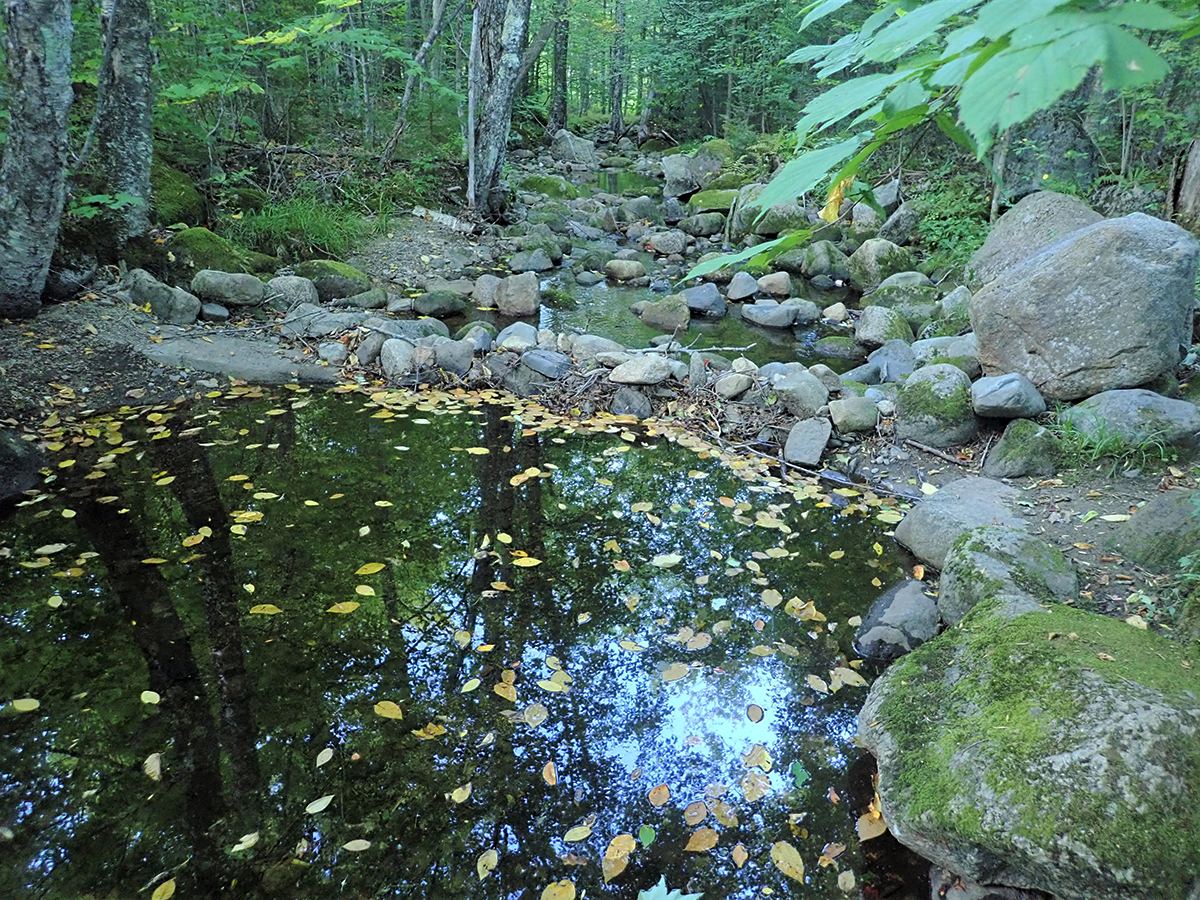 A small fish-blocking manmade dam on a stream in New Hampshire. — photo by Bob Mallard

Several months later, and in the midst of the worst drought I have ever seen in in New England, I drove over a small stream I had fished for decades. Looking down as anglers always do, I noticed a small rock dam that appeared to be all but stopping the flow. I pulled over, parked the truck, and went down the embankment to take a look. Upon inspection, the top foot of the dam was bone dry, and the only water passing through was seeping between the debris-packed cracks.

Based on what I had been seeing elsewhere recently, wild native brook trout were pushing upstream en masse in search of thermal refuge. Plus, these fall-spawning native fish were also on the move and heading toward their historic spawning grounds. Due to the nature of the dam and dangerously low water, and with no rain in the forecast, it was clear that no fish were going to get upstream or downstream of the manmade obstruction.

Looking to help the fish out, we decided to take matters into our own hands, literally, and began to deconstruct the dam one rock at a time. When we finally breeched the dam, the water starting pouring through the opening and the pool above began to drop precipitously. As the pool receded, we noticed a large-for-the-stream brook trout darting about, apparently trapped by the dam and unable to get to where it was trying to go.

This incident removed any doubt I might have had as to the detrimental effects of these innocuous-looking manmade structures. I thought about the fact that I had basically ignored these streamflow impediments for years, and how many such structures I had been seeing lately due to the unprecedented COVID-induced back-to-nature surge our public lands were experiencing at the time.

Having gotten my attention, I dove headfirst into the world of manmade rock dams. After years of complacency, I had already started to question if in fact these harmless-looking rock structures were actually harmful. I struggled to reconcile the fact that beavers make dams, and I have always taken the position that they should be allowed to do what beavers do. But what about us? Are we creating problems for our already stressed wild native fish?

While not directly impacting fish, I knew that altering the streambed was bad for invertebrates which indirectly affects fish by reducing forage. I also understood that removing structure was directly bad for fish as it eliminates refuge from predators. Obviously, most of the rocks used to build these manmade dams come from the streambed, although, some are carried from the shore. And when rocks are pulled from the shore they destabilize the bank. 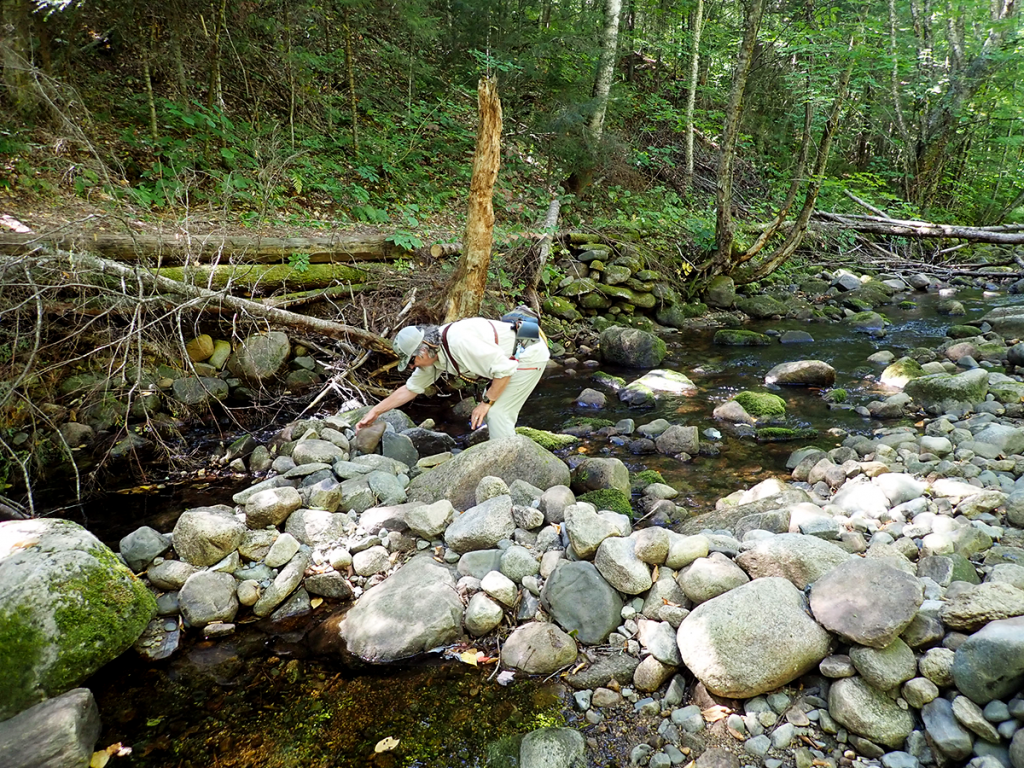 Digging deeper, I learned that many others shared my concerns regarding manmade rock dams. I found articles from government agencies in Washington and Montana discouraging their creation and encouraging their removal as well as challenges from organizations such as Native Fish Society. One article noted that a local conservation group had removed approximately 120 manmade rock dams from one watershed in just a year.

Manmade rock dams can warm the water by widening and slowing the flow. They can block fish passage, preventing them from reaching critical thermal refuge and spawning habitat. Rock dams also concentrate fish, making them easier for anglers to exploit as well as natural predators such as blue herons, kingfishers, otters and mink.

Once the fair-weather recreationists head home for the season these manmade rock dams remain in place throughout the fall and winter unless we get unusually high fall rains. As the season progresses they clog with fallen leaves and other debris. Unless the water is able to flow over, this makes these dams virtually impassable for fish of most sizes and especially adult fish.

“Rock dams built to create swimming holes may seem harmless but can accumulate debris and build-up over time. While small dams can be washed out during spring, these features often remain intact and function as a passage barrier all the way through winter, [Montana Fish, Wildlife & Parks] says.”
-MonatanaRightNow.com

Unlike a cow or horse that will push through a fence to get at green grass, or a duck that will cross a road for the same reason, fish will not jump a dry structure as they have no idea what is on the other side. While it may happen from time to time, I have never seen it, heard of it, nor seen evidence of it. Conversely, I have seen fished stacked up above and below a barrier to passage countless times.

In many states, building rock dams is also illegal. Sometimes it requires a permit that you are very unlikely to be able to obtain for what is a recreational activity. While often overlooked and rarely enforced, there are laws on the books that allow the builders of rock dams to be fined. The problem is these dams go up fast and unless caught in the act it’s tough to make a case.

“RSA 482-A:3 requires anyone who wishes to “excavate, remove, fill, dredge or construct any structures in or on any bank, flat, marsh, or swamp in and adjacent to any waters of the state” to obtain a permit from DES.”
-New Hampshire Municipal Association 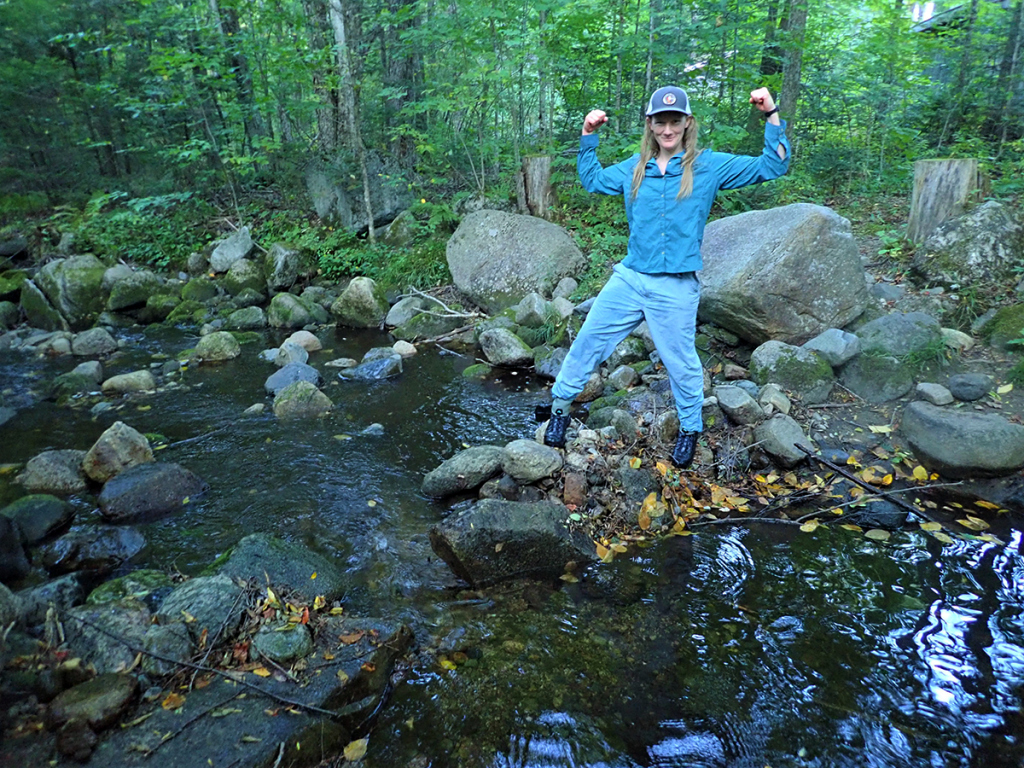 Species don’t go extinct all at once, it’s an incremental process that happens one population at a time. In fact, there’s a term for the interim steps that can lead to extinction, “extirpation,” which means “locally extinct.” And aren’t all native coldwater fish stressed due to things like floods, droughts, warming water, nonnative fish, state-sponsored stocking, and angler exploitation? In fact, locally, critically important spawning streams had gone intermittent due to chronic drought conditions.

A wildlife population doesn’t have to be formally Threatened to be threatened or negatively impacted by manmade rock dams. Problems happen at the population level as well as species, subspecies, and life history strategy level. Aren’t specific populations important? Aren’t they worth saving? Aren’t they an important part of overall aquatic ecosystem health? And what’s the tipping point when a population-level threat becomes a species or subspecies level threat?

“Faced with drought conditions, blocked passage, and brook trout spawning season, NFC board members breached a total of 6 dams on 3 rivers and streams over the course of several days. This entailed standing in the water and throwing, carrying, and rolling one rock at a time, some of which weighed tens of pounds, until an unobstructed flow was resumed and fish could pass.”
-Native Fish Coalition Campaign Page

This series of events was a real eye-opener for me. It led to Native Fish Coalition taking matters into our own hands and embarking on an organization-wide project to help educate the masses in regard to the impacts of manmade rock dams. We encouraged folks to get involved in the removal of these dams and gave them a platform to show off their hard and environmentally useful work.  We even developed a decal and t-shirt to recognize their efforts and promote this important message.

While somewhat sidetracked by COVID for the last two years like everything else, Native Fish Coalition plans on ramping up the rock dam project in summer 2022 with periodic campaign updates and other activities. We hope to get some informational signage for problem areas as well along with some level of support in identifying where these manmade dams are and help from the powers that be in removing them when they pop up.

Unfortunately, the laws that make the construction of manmade rock dams illegal may also prohibit their removal by the general public, at least technically. And where private property is involved there are potential issues in regard to trespass. But like all harmful and criminal acts, the public has the right, and some would say obligation, to intervene where possible, practical and safe to do so.

When removing rock dams, it is important to know and obey any laws in place regarding trespass and/or stream alteration. In some cases, this may mean obtaining landowner permission and/or permits from government agencies. When in doubt, remove just enough rocks to allow fish-passage, keeping rocks roughly where they were, and report the dam to the proper authorities.

Be careful, as standing in slippery streams manually moving what are often large and heavy rocks can be dangerous. Consider using pry bars or some other form of leverage rather than brute force. And don’t go any further than needed to get the stream flowing again. Rather than throwing the moved rocks up on the shore, leave them in the streambed where they can provide structure for aquatic lifeforms.