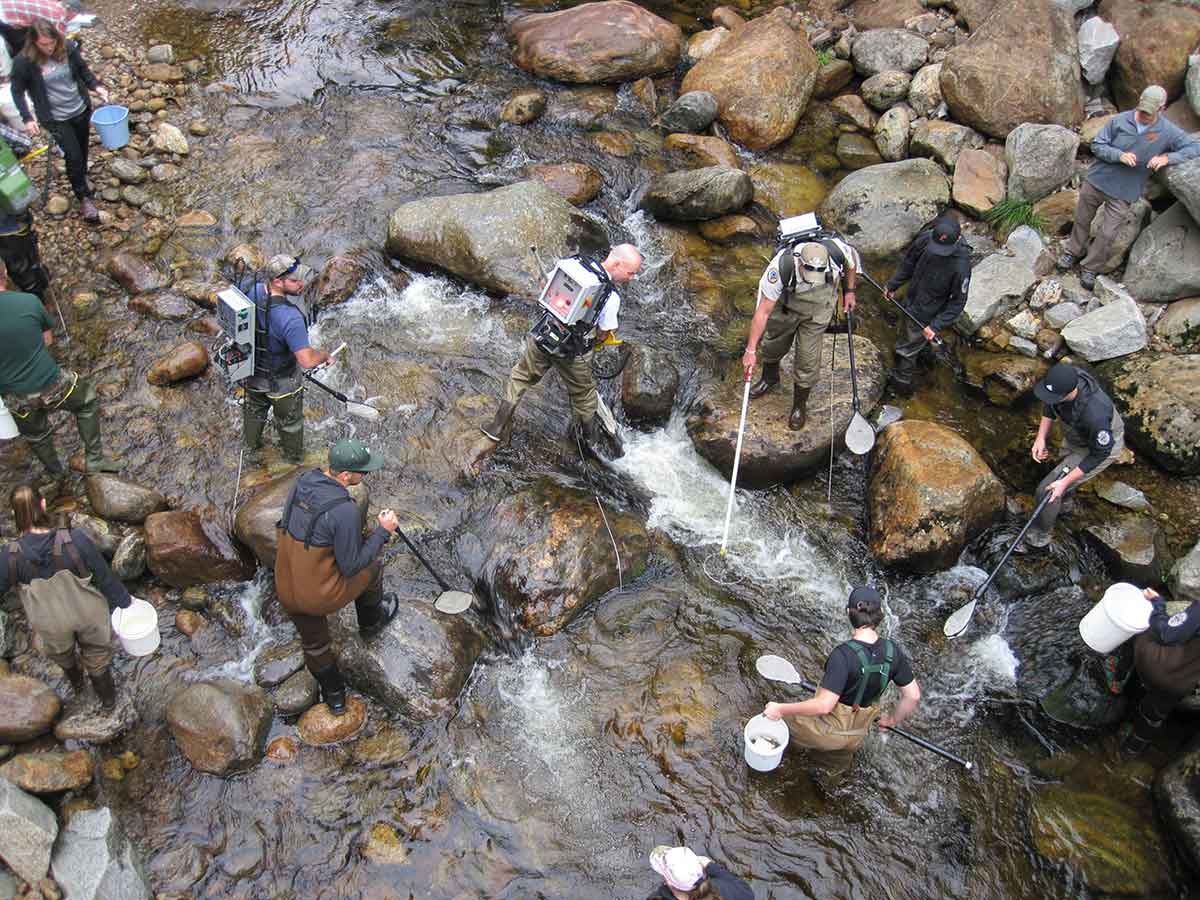 Editor’s Note: This week we introduce a new series on fly fishing conservation.  First, we look at studies and surveys, and about acting on what we learn. This series appears with the support of Swift Fly Fishing, makers of Epic Fly Rods.

We’ve all seen it, large mammals with electronic collars or ear tags, birds with leg bands, and fish with small antennas sticking out of their bellies or clipped fins. Or maybe you’ve stumbled on one of the many fish weirs, stationary gillnets, fish traps, or fish counting stations strewn across our aquatic landscape.

You may have seen scientists driving backcountry roads hanging out the window waving what looks like an old TV antenna around, trying to locate radio tagged animals. Or folks walking along rivers with the same equipment trying to pinpoint the location of a single fish. Or wader-clad teams slogging down our streams with what look like Ghost Buster packs and carrying nets, buckets, and clipboards.

Some of you have even been involved in so-called “citizen science” projects where state fish and game agencies send sportsmen, birders, and others afield to collect data via fishing, hunting, scat and hair collection, or visual contact. These volunteers are doing what they can to try to help manage and conserve our fish and wildlife.

As a nonscientist, when it came to fish and wildlife studies my assumption was always that if it wasn’t beneficial, and in fact necessary, we wouldn’t do it. However, after 20 years in the native fish conservation trenches, unfortunately, I’ve learned this is not always the case.

Much of what I’ve seen afield falls under what you could fairly call, analysis/paralysis. Some studies go on far longer than needed, becoming as much a habit as they are a useful tool. And many studies go on year after year with little or no action taken, even when the data suggest otherwise.

To be clear, much of what we know today about fish and wildlife is the result of studies and surveys, many of which involved the tools and tactics noted above. Radio-telemetry technology has advanced to a point where satellites can be used to track wildlife across a virtually unlimited area. Passive Integrated Transponder, or PIT tags can be used in conjunction with fixed readers to record fish movement without us even being there.

At one point, it seemed like one out of ten animals I saw in Yellowstone National Park were wearing radio collars. Elk, bear, and wolves, all walking around one of the wildest places in America looking like escaped family pets. This beckoned the question, How much data is enough data, and were we still learning enough to warrant this aesthetic degradation of America’s last best place?

Unfortunately, I’ve found that some studies don’t have clear goals and objectives. And others are too vague to be of any real good. For example, the following comes from the Maine Audubon website and is related to a volunteer citizen science study. While it reads well, it lacks specifics:

“The information collected through the Brook Trout Survey by volunteer anglers – verified by biologists – will help inform future fisheries management decisions. This data will be used to set policy and implement effective conservation strategies to protect, restore, and enhance native Eastern Brook Trout populations in Maine.”

It is important to note that in the early stages of the project, the goals were very specific: Inclusion in the State Heritage Fish program. This was changed as it became clear that they could not fulfill the promise due to resistance from Maine Department of Inland Fisheries and Wildlife in regard to adding new waters. 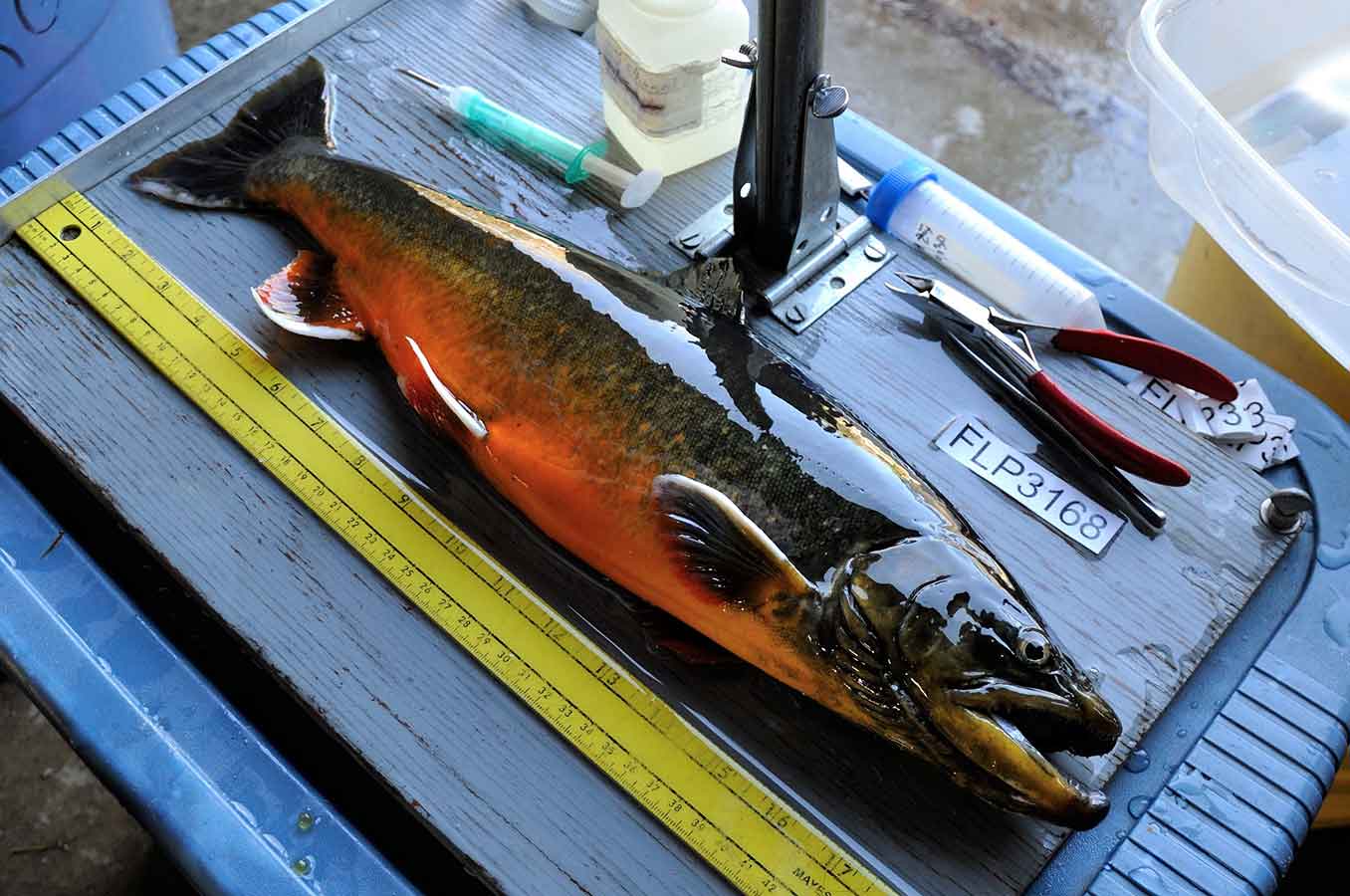 The project noted above has been going on for nearly a decade. To date, the only “management decisions” that have been made are those required under state law, and even this has been random and arbitrary. The following comes from a project newsletter:

“[The volunteers] found brook trout in 82 ponds and 90 streams; MDIFW confirmed breeding populations of brook trout in 58 of those ponds and added 30 of them to the State Heritage Fish list.”

The rules for creating the initial lists of State Heritage Fish waters were clear and simple: Present and not stocked in twenty-five years or more. Since then the criteria for adding new waters has been watered down to include year-round presence, all age classes, etc., leaving many waters that would have been protected had they been identified initially, unprotected.

New Hampshire Fish and Game has been studying the Wildcat River, one of only two Wild and Scenic Rivers in the state, for several years now. The goal was to determine whether it should be designated as a Wild Trout Management water and protected accordingly.

Based on data that showed a wild trout biomass well in excess of the Wild Trout Management inclusion criteria, the state agreed to stop stocking above a natural falls. Unfortunately, while the data showed pretty much the same thing below the falls, they refused to stop stocking there.

As for Wild Trout Management designation, even though the biomass far exceeds the inclusion criteria, no action has been taken by Fish and Game citing resistance from “some of the TU members, locals and fish and game club.”

Per a 2015 New Hampshire Department of Environmental Services document: “The NH Fish and Game Department has identified the Ham Branch River as a significant fishery because it supports native wild brook trout… it appears that wild brook trout populations are sustained throughout the watershed…” Unfortunately, as of 2019 it had not received Wild Trout Management designation and the river was still being stocked.

In the early 2000s, Harris Dam on the upper Kennebec River in Maine came up for relicensing. With daily flows ranging from 140cfs to 6,000cfs in support of power generation and whitewater rafting, it would be hard to find a dam that altered the aquatic environment more.

During relicensing, industry-paid biologists tagged fish, chased them around the river, recorded their movements, and released an extensive report on their findings. The study confirmed what most of us already knew, the river was home to wild native brook trout and they used one stream more than any other for spawning.

Conversely, it said that the radically fluctuating flows didn’t have much of an effect on the fish, they simply moved around or hunkered down when the water bumped up. This was based solely on what we knew right then, and herein lies the problem – what would the wild native brook trout population be like if the flows were more stable and natural?

In the end we got a compromise in regard to minimum flow restrictions, increasing it from 140cfs to 300cfs, which increased, but not necessarily doubled the holding capacity of the river as low flow duration is much longer than high flow periods, while also lessening the severity of the flow fluctuations to some degree.

On a typical day, the dam releases an average of around 1,000cfs of water. Of course, this doesn’t take into consideration the impact of the upstream impoundments which hold back water which would otherwise flush through the system during high-water events. Based on what USFWS calls “rule of thumb,” natural flow would be in the 500-700cfs range, which sounds reasonable.

Having the minimum flow at what could be just 50% of natural flow is not good science. But it is good for power companies, the whitewater rafting industry, and wading anglers who feared that higher flows might impede their ability to fish, and that’s why it’s allowed to happen. As is often the case, the fish are the ones that pay the price.

Maine Department of Inland Fisheries and Wildlife routinely uses lethal gillnets to survey wild native fish populations, yet rarely changes how the water in question is managed regardless of what they find. Recently, they killed six rare Arctic charr from Green Lake, a water with what they classify as a “very low” abundance of such, and where no charr had been confirmed in nearly two decades.

Green Lake is currently being stocking with nonnative lake trout, the same species blamed for the demise of Arctic charr in New Hampshire and Vermont. The lake trout are protected with a 1-fish 23-inch limit. And no action has been taken to protect what is likely a relict population of rare fish, and one of only twelve, and possibly eleven viable populations remaining in the contiguous United States.

While my worldview is admittedly northeast centric, I hear the same things from all over the country. Surveys without goals, data that is ignored, and policies and programs that are arbitrarily imposed based on social preferences not science. If we are not going to act, why continue to waste time and money collecting data we are not going to use? And why kill fish just to prove they are there?