“Walking Upstream on the Matuara” 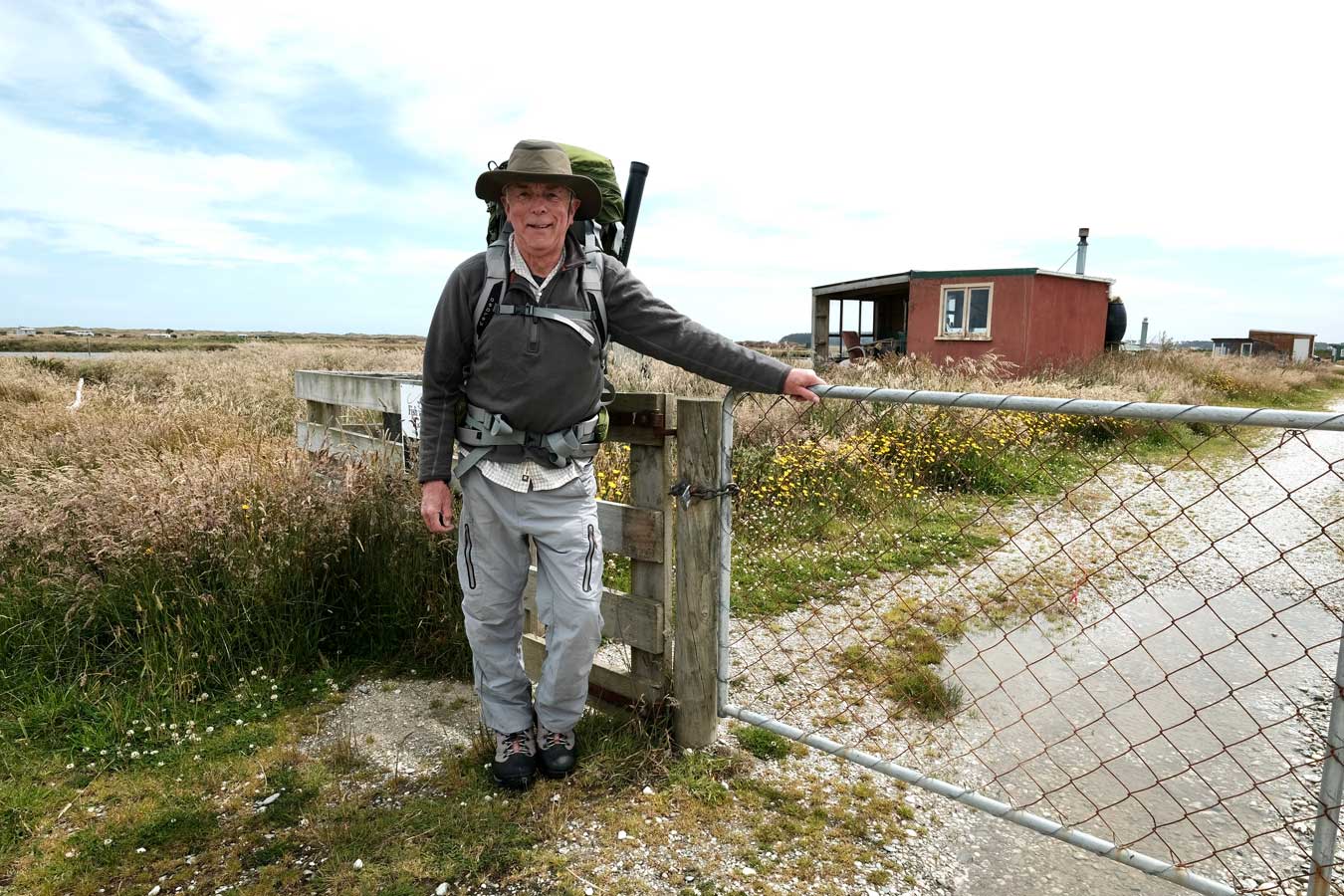 Saying goodbye to Sue at the start of the walk.  Sue Larkins photo

I started thinking about walking the length of Southland’s 190-kilometre Mataura River sometime in 2015. At first it wasn’t much more than an idle dream, but it eventually crystallised into something I couldn’t resist. For a few years I had wished that someone who had loved the river had written about it, say, in the early part of the last century, leaving a record of what the river was like then and what it meant to the people who cared about the Mataura.

It has taken me decades to understand just how extraordinary the Mataura is as a brown trout fishery. At the start I was perhaps too absorbed in the fishing to judge it against the other great trout rivers on the planet. While I’m sure others did understand its place in the pantheon of brown trout fisheries, no one it seems had attempted to make the case for the Mataura in writing.

It wasn’t until the 1980s, when I began to devour as much good angling literature as I could find, that I was able to put the Mataura into a wider perspective. The fly-fishing I was enjoying was as good or better than that I read about in the best stories of the great rivers and streams of the United States, England, Ireland and Scotland, which for me were the homes of the sport I loved. And those experiences from people like Joe Brooks, Negley Farson, Charles Fox, Vincent Marinaro, Robert Traver, G. E. M. Skues, John Waller Hills and Frank Sawyer mostly referred to an earlier golden era.

A decade or so later I visited a few of the fabled US streams I had read of, and while I appreciated the sense of angling history they held, it was clear to me that, for many, their time of being great fisheries for wild trout had passed.

There were other factors involved in my decision to walk the length of the river. Something about the physical challenge and the adventure involved appealed — a vanity perhaps — as I entered the second half of my seventh decade, when there is a temptation to consider those things best left to the young. There was, therefore, a certain irony in my inability to make the trip in the summer of 2016 due to persistent swelling and pain in one of my Achilles tendons. When my tendon eventually healed during the winter of 2016, I began to build my walking fitness for the journey by getting out of bed while it was still dark and heading off on hour-long walks around Dunedin’s hill suburbs with my wife, Sue. I was used to walking long distances while fishing, but the uncertainty I felt was related to how well my body would cope with covering rough ground for a couple of weeks.

The US writer and fly fisher Thomas McGuane made some comments about our knowledge of rivers that also influenced my walk. He said that we can only truly know one river in our lives, and even then just one part of that river in an intimate way. At this more reflective stage of my life I accept McGuane’s comments to be true. Over the years I have known different sections of the river with the intimacy that I believe he meant: first as a boy when I knew the river half a day’s bike ride either side of Gore; and in the later stages of my life I have grown to understand the essence of the Mataura and its tributaries from Otama to the Nokomai Gorge. I hoped the walk would help me tie these disparate intimacies together, and leave me with a deeper sense of the whole river. 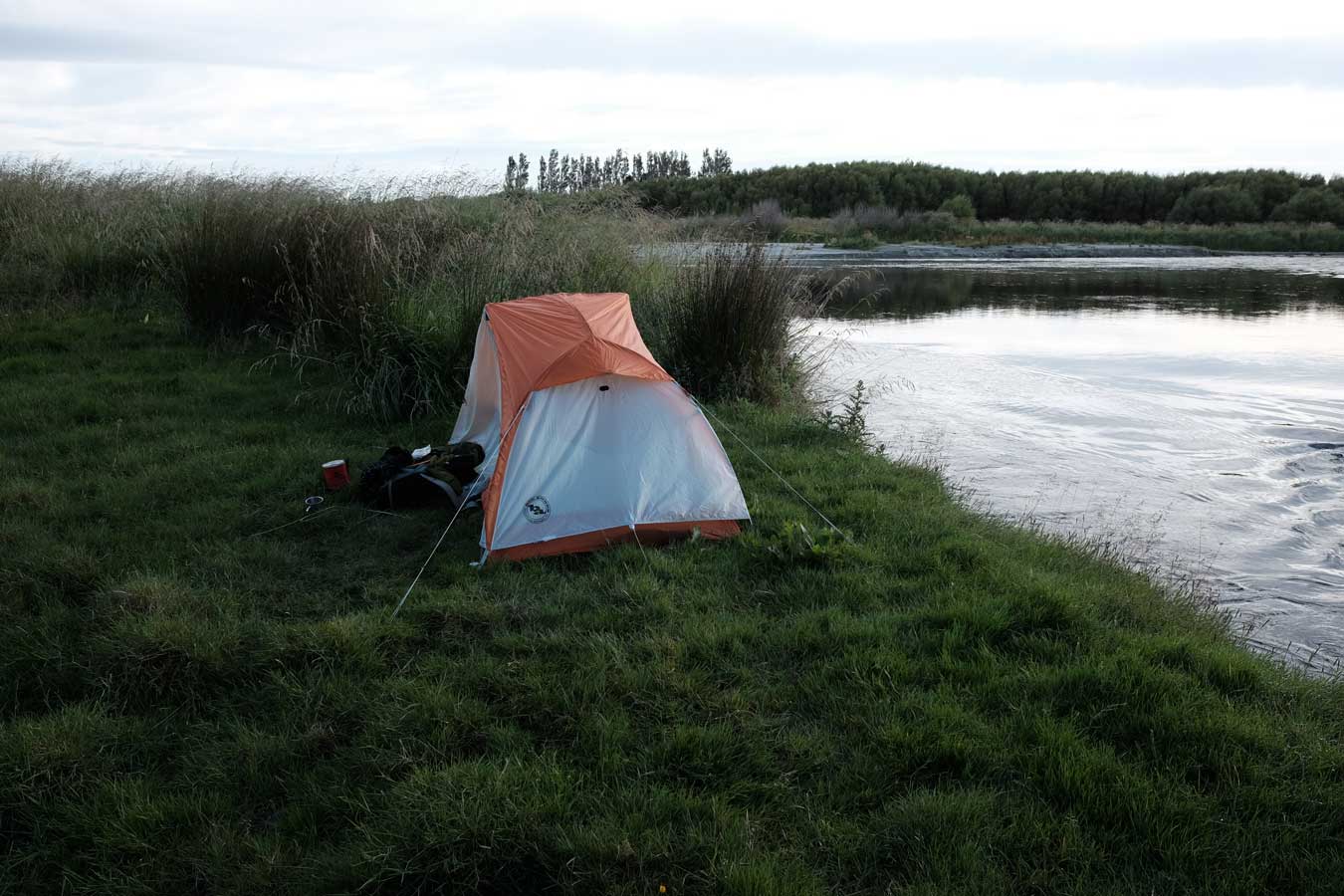 Because I held a romantic notion that I would spend most nights camped beside the Mataura, the walk proved to be a good excuse to upgrade my camping gear. I bought a oneperson Big Agnes tent that weighed less than a kilogram; a feather-light pack; a beautifully engineered lightweight gas cooker; an emergency locator beacon; and a power pack for my cellphone. In the spring I bought the series of Land Information New Zealand’s Topo50 maps that covered the length of the river, and began the process of measuring and planning the route. My initial calculations were based on being able to cover thirty kilometres each day. That didn’t feel too daunting a task based on the extent of river I sometimes covered on a day’s fishing, particularly as the hours of daylight would be long. I figured that walking four hours in the morning and another four in the afternoon would have me easily covering thirty kilometres, and leave me an hour or two to fish, eat and reflect. The route I measured along the river looked to be about 250 kilometres, which meant it should be completed in around nine days. I double-checked the route using Google Earth, which allowed me to fly along the path I thought I would take and decide where the river might be crossed in those sections that I wasn’t familiar with.

I also visited the Hocken Collections at the University of Otago library in Dunedin, looking out as much written material as I could find on some of the places I would pass through, as well as observations from some of the early European settlers in the Mataura Valley. It was a deeply fulfilling experience, because it left me with a picture of what the valley looked like in the 1850s when the first English and Scots settlers left the coast to explore the area. Reports of the first encounters with the Māori who occupied the coastal area and were seasonally active near Tuturau and the Mataura Falls were also helpful in lifting my understanding of what the river meant to them.

For a time I considered the direction I should take. My initial inclination was to start as high in the headwaters as I could manage, and walk with the flow to the Southern Ocean. It felt like the natural course to take, but over the years I have always preferred journeys that took me towards the highlands. I feared that after leaving the pristine start of the Mataura in the mountains, it would be downhill in more ways than one as I headed to the coast. Eventually I settled to start at the ocean and, like Benjamin Button, walk towards the birthplace of the river.

In the couple of years I was thinking about the walk I read a number of fine books on nature writing. Earlier I had read Annie Dillard, and Aldo Leopold’s A Sand County Almanac, and while I prepared for the walk I read Robert Macfarlane’s The Old Ways and The Wild Places, the Scottish Modernist writer Nan Shepherd’s The Living Mountain, and the late Roger Deakin’s Waterlog: a swimmer’s journey through Britain. They set a dauntingly high standard, but inspired me to capture my experiences on the river in prose.

A month before I was due to start walking, I sent an email to Steve Lovemore, a friend from Cape Town, in which I outlined my route and included some map references so he could get a sense of the challenge. He has the spirit and experience of an adventurer, so I hoped to benefit from his thoughtful insights. His advice was clear: I was planning to cover too much ground each day — and because of that I wasn’t allowing enough time to ‘rest under a willow and absorb the experience’. Take a book with you, he said. He prescribed As I Walked Out One Midsummer Morning by Laurie Lee: it would be the perfect accompaniment for such a walk, he said. 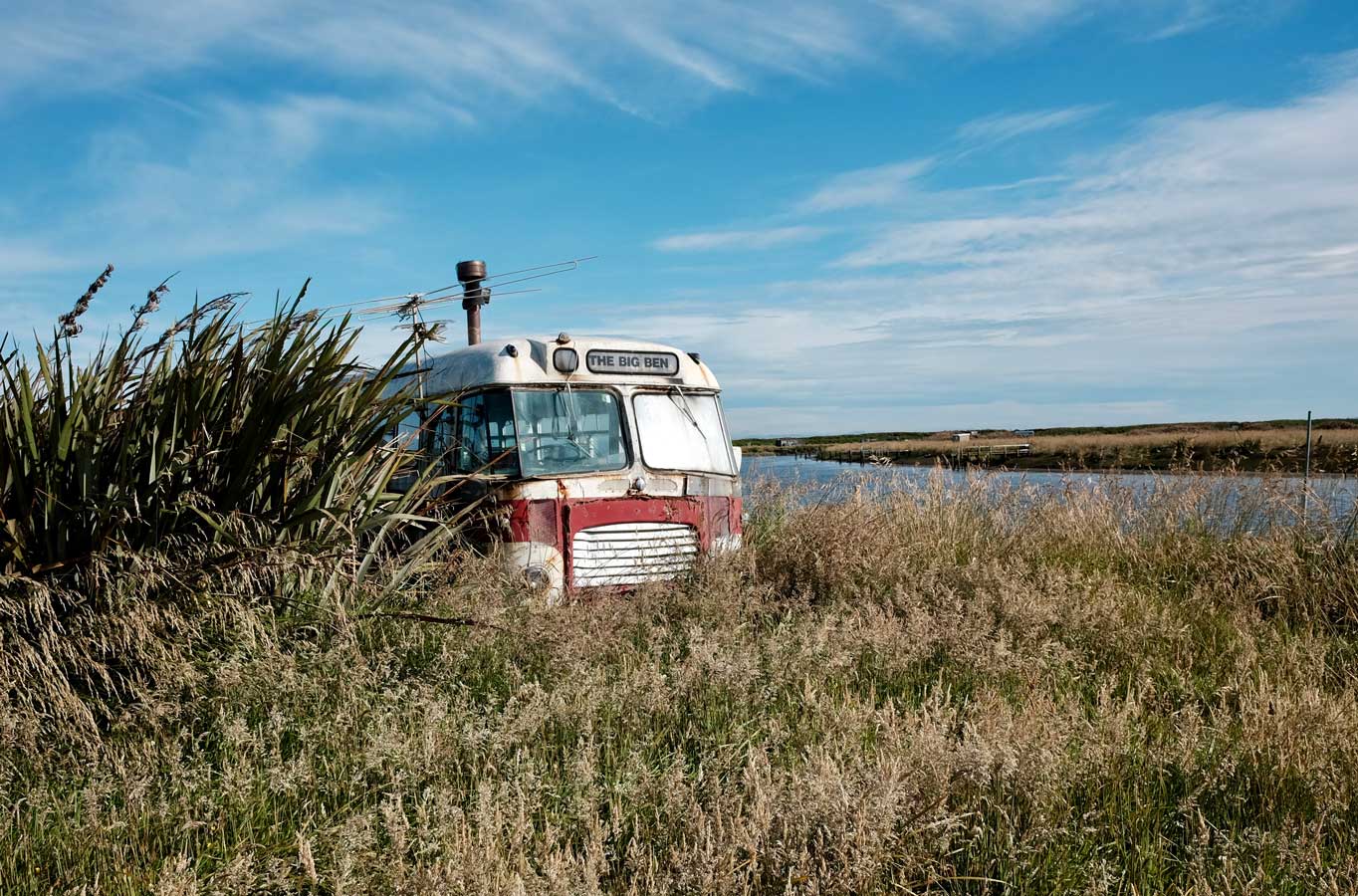 It didn’t take me long to accept that he was right. In my desire to limit the time I was going to be away from Sue and home I had set targets that might have defeated the purpose of doing such a walk — turning it into a slog, rather than the reflective celebration of the river I hoped for. I adjusted my plans accordingly so that my daily target was reduced to about twenty kilometres, which pushed the expected duration of the walk out to twelve to fourteen days.

A couple of weeks out from the start I decided on the food I would need and purchased a quantity of dried food, nuts, cereals, high-energy protein bars and ground coffee. Instead of following my usual course at the supermarket of trying to limit the energy content of the things I buy, I went all out, looking for the maximum calories relative to the weight involved. I didn’t, however, go as far as the Arctic explorer I had met in the United States a few years earlier. He told me he needed over five thousand calories a day for his solo sled trip to the Pole and back — and that the only way he could get them was in the form of butter, of which he chewed one and a half blocks a day. 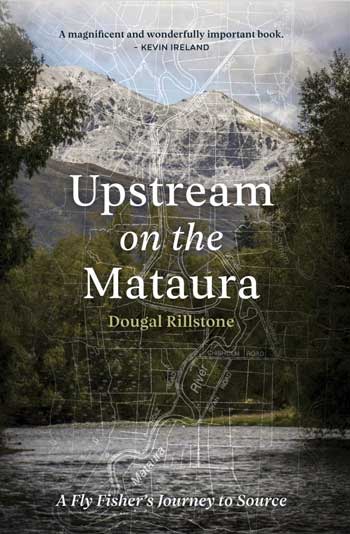 Buy “Upstream on the Mataura”

A week before I was due to start the walk I clambered into my Cessna and flew towards Fortrose under a low grey ceiling to check out the best route along the lower river. A motor boat towed a waterskier over the wind-torn surface as I banked over the estuary. Even from a few hundred feet it was obvious that the swampy true left bank of the river would take ages to cross. I pulled the plane into another tight turn, flew low over the scores of whitebaiters’ huts before heading down the rolling dunes of the sandspit that holds the Southern Ocean from over-running the estuary. The last few kilometres were deserted, with just the outline of an old four-wheel-drive track the only sign of recent human activity. It looked like the perfect place to start.

I became distracted and edgy in the days before the trip, and the night before I headed south with Sue and our two dogs my sleep was disturbed by nightmares, as though every old insecurity in my soul had surfaced to let me know what they thought of my journey. In the pre-dawn gloom, I lay wondering why I was making the trip. The earlier feelings of excitement had been replaced by a fear of the unknown, and a recognition of how lonely I would likely feel spending so many days mostly by myself. By the time we left Dunedin a solid headache pulsed behind my eyes, and my mind was so cluttered with doubt that I forgot to fill the car with fuel on the way south, saving the day with a stop at a pump in Edendale — the last before the coast.

‘You lived here long?’ I asked the woman at the country-style petrol station.

‘We get away a bit, my husband and me, in our van — but yes, been here all my life,’ she said with a rueful smile.

I looked towards the south coast and the piled clouds being driven hard by a westerly gale. ‘Not much of a day. I’m planning to walk up the Mataura. Fished it most of my life,’ I said, as though trying to explain what I was doing in the south.

‘Summer hasn’t started here yet,’ she said. ‘Spring was okay, but it’s blown ever since. Hope it picks up for you, but the forecast is lousy.’

Excerpted with permission; all rights reserved. Buy Upstream on the Mataura: A Fly Fisher’s Journey to Source by Dougal Rillstone