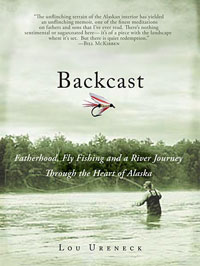 INSIDE THE SMALL CIRCLE of our tent, I listened to the rain that had blown in from the Bering Sea and the whisper of my son’s breathing as he slept beside me. We were camped on a gravel bar that shouldered the Kanektok River on the western face of Alaska. The storm that was lashing our tent had begun as a typhoon northeast of Japan, traveled across the Pacific and rolled along the chain of Aleutian Islands to the great Kuskokwim River delta where it was sputtering in a rattle of wind and rain. It billowed and snapped our two-man tent as if it were a luffing sail. We were more than a hundred miles from the nearest link to the outside world, and that was a dirt landing strip at Quinhagak, a Yup’ik Eskimo village. We were without a phone or radio, without a guide and without the slightest bit of first-hand knowledge of the country we were in.

This is where my memory of our trip usually begins, on the morning of the third day when the rain came down in sheets. Maybe that’s because there was another storm blowing, the one between Adam and me. Memory is like that: It has its own intelligence. It holds on to what matters, and it sees connections between events in our lives that we sometimes miss when we are living them. My memory has put these two storms together, both of them hammering me with my failures as a father. Already, the tent was beginning to leak, an early premonition of how ill-prepared I was for a trip into the Alaskan bush. The bigger failure was my divorce. I had taken apart a 20-year marriage. Adam was angry about the breakup of our family and the loss of me as a perfect father and upright man. I had learned there was no explaining a divorce to your child, and the more I had tried the worse I had made things between us. I had stopped trying.

On that morning of the third day, I wasn’t sure I could place our position on the crude map that I had drawn back home in Philadelphia and kept folded in the pocket of the flannel shirt I had been sleeping in. I guessed that we had covered about 30 miles of river. I was cold and hungry. I wanted a cup of coffee but lighting our small camp stove to boil water would be difficult in this weather so I slipped deeper into my sleeping bag and told myself I didn’t need it. I guessed the time at 8 o’clock. The night before, we had fished past midnight in the purple twilight. We had caught pink hump-backed salmon and glorious red-and-green char until our shoulders ached, and I knew Adam would sleep for another hour or more if I didn’t rouse him. He had slept like a stone since he was an infant, and he was no different now at 18 years old and six feet-three inches of sinewy boy-man. I let him sleep. I enjoyed the temporary peace between us. Memory also grants its concessions.

I was fairly sure that we were safe from the brown bears that were stalking the river. The bears were enormous, tall as church doors, wrapped in great blankets of heavy brown fur, the color of cocoa. In late August, with the salmon runs at their peak, the bears had moved in from the surrounding country — mountains and tundra — and swarmed the river and its tributaries, feasting on fish flesh. It made no difference to the bears whether it was alive or dead. They raked flopping sockeyes and silvers out of the swirling water, and they ate the black carcasses of the big kings that had come up the river in June, spawned and died. This was gorging season. We had been careful the night before to keep a clean camp. Our food, freeze-dried packets of noodles and Thai chicken, instant coffee and a dwindling number of Power Bars, was stored in dry bags and stowed in our raft, which we had beached several hundred feet downstream, well away from where we slept. We already had experienced two close calls, one with a headstrong yearling, and I wasn’t eager for another. I felt for the shotgun that I kept between our sleeping bags. It was there, cold to my touch, with its breech safely open and slugs in both chambers. I tried to get a little more sleep but I wasn’t having any luck.

Adam and I took our trip to Alaska the summer he graduated from high school. I was 49, and Adam was 18. I was deep into middle-age; he was on the verge of becoming a man. I had been divorced for a year by then, though my former wife and I had been apart for three years, in different cities separated by hundreds of miles. A chasm of anger, disappointment and sadness had opened between us. We communicated through lawyers. During most of that time, Adam and I had lived together as father and son and sometimes as warring parties. I was his custodial parent.

I had hoped that the trip to Alaska would settle some of the trouble between Adam and me. It would be good, I thought, for us to go fishing together one last time. In the woods and on the river, maybe we would regain something of our old selves before he went off to college and on to the rest of his life. Looking back, I have to admit the trip was a little desperate. I had been willing to take the risk. My life was in a ditch: I was broke from lawyers, therapists and alimony payments and fearful that my son’s anger was hardening into life-long permanence. I wanted to pull him back into my life. I feared losing him. Alaska was my answer. What I had failed to appreciate, of course, was Adam’s view of the expedition. For him, the trip meant spending 10 days with his discredited father in a small raft and an even smaller tent. It was not where he had wanted to be, not now, not with me, and not in the rain. The trip would take us through 110 miles of rugged Alaska, some of it dangerous and all of it, to us anyway, uncharted. I had no inkling of what lay ahead: fickle early fall weather, the mystery of the river, and unseen obstacles that already were silently forming themselves in opposition to my plans.