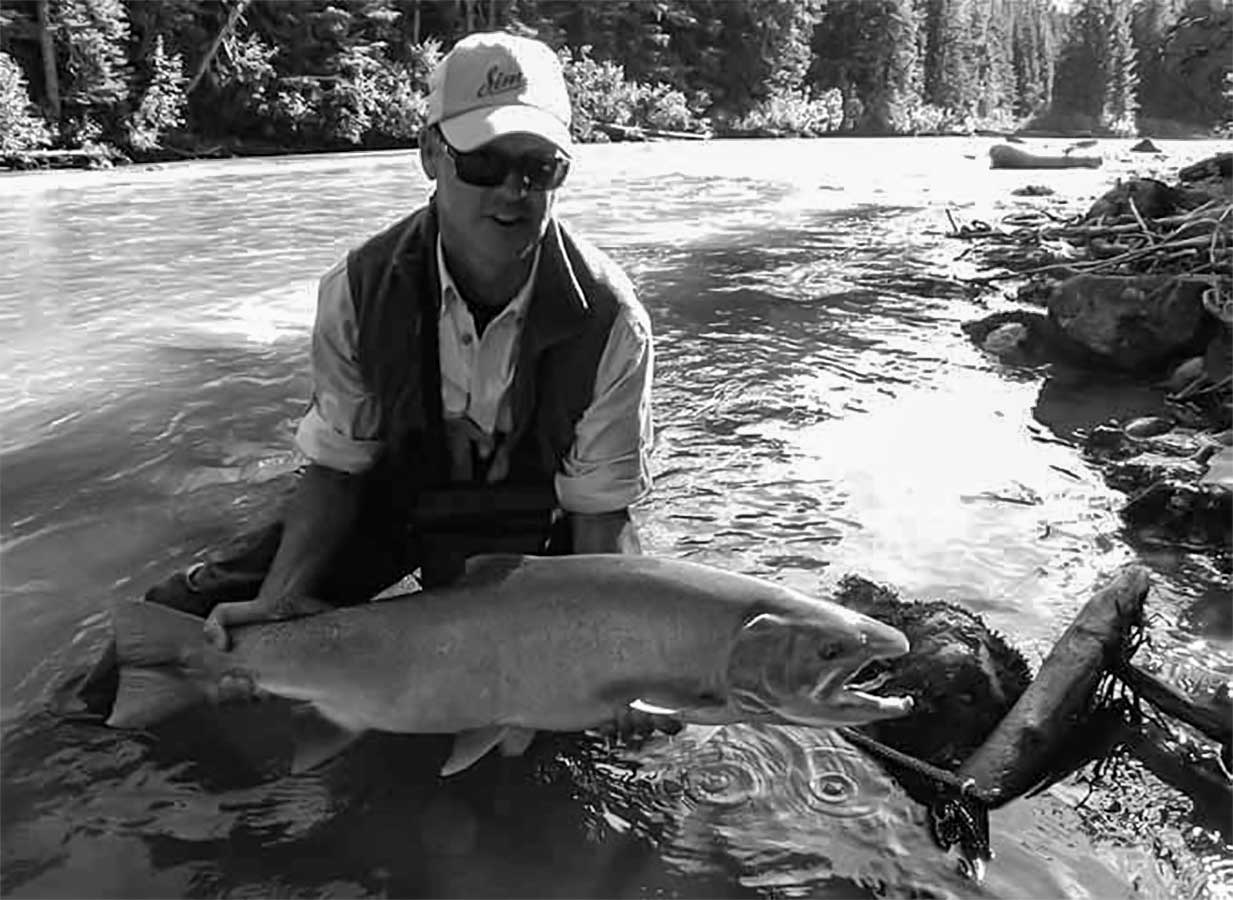 My dad shot the head off a turkey with a rifle from 150 feet at the Montour Run Sportsman’s Club turkey shoot raffle in 1956. About an hour and a half later, he stubbed out a Winston, set down a pony bottle of Duquesne beer on a picnic table, picked up a .22, and shot a bat out of the air as it circled the bulb of a nearby streetlight. My dad could shoot.

I’m a pretty decent shot myself and I probably couldn’t shoot a bat into the air if you folded up its wings and shoved it down the barrel of my twenty-gauge.

Membership of the Montour Run Sportsman’s Club was made up of mill workers, railroad men, mechanics, farmers, and numbers runners. Italians, Poles, Germans—sons of immigrants. Men in hats, white short sleeve shirts, who smoked cigars, drank beer, and swore. As it applied to some of its members, the word “sportsman” in the title was probably a stretch. My father, who always taught us good sportsmanship, didn’t quite fit that mold.

Montour Run itself ran slow and bath-tub cool past the sportsman’s club, its banks holding deep shades of orange left over from strip mine deposits. Andrew Montour himself was a half-European and half-Oneida Indian who served as a scout and interpreter of four languages during the French and Indian War, and the idea of something as exotic as Indians fighting alongside and, in Montour’s case, against Frenchmen in these western Pennsylvania woods filled me with excitement. You’re talking about a kid with a big imagination, and so something like this was just more coal being shoveled into an already blazing furnace. 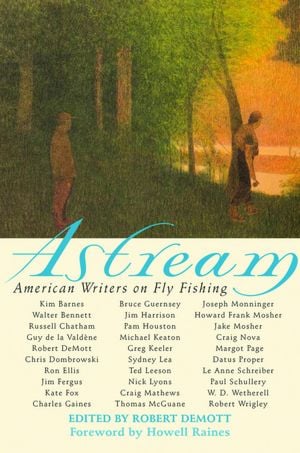 Buy “Astream” in the MidCurrent Store

The creek flowed under a narrow two-lane county bridge about a mile down from the club. I have always been drawn to moving water, and most summer mornings between the ages of nine and twelve I could be found sitting on the big, cool, mossy stone abutments of that bridge holding my hardware-store Zebco fishing rod, with a packed lunch at my side. And those smells. Sweet humid air, honeysuckle, creosote off the railroad ties of an old railroad bed fill my sense memory to this day, but what really transports me is the water. Staring into the water. Moving water. Water just clean enough to hold a reasonable population of bluegills, suckers, catfish, and the occasional carp. I can still feel that tap-tap of a bluegill as it sabotaged my nightcrawler, nipping away at it right up to the bend in my Eagle Claw hook, then swimming away. Watching that dunk of my bobber when a catfish ate. This is what thirty years later my boy would call “plain fishin.” Plain fishin’ to this five-year-old was anything that didn’t require a fly rod. Plain fishin’ was sinking a Hare’s Ear nymph or a Trude from the end of the monofilament line of his own Zebco rod. The beginning of the end of my own plain fishin’ occurred after staring at on old photograph of my grandfather standing on a rock with a cane rod working a fly through a pool in the middle of a Pennsylvania trout stream. He was wearing rubber boots, a wool sports coat, and a smile. If Pennsylvania fly fishing was Christianity, to me he looked like Jesus.

It was a few years after staring at that photograph of my trout fishing grandfather that I took the money from cutting Mrs. Story’s lawn and, with the help of my dad, bought a $60 fly rod and a $34 Mitchell reel, once again from a hardware store. It should be noted that Mrs. Story was generous enough to bump me up from $3 to a whopping $3.25 to cut about an acre of grass while tallying about seven yellow jacket stings per summer. I caught my first trout on a fly under a bridge in King’s Creek in West Virginia, not forty-five minutes from Montour Creek. A thirteen-inch hatchery-born, planted rainbow. Over the years since then, I’ve become a decent angler. Self-taught and along the way generously schooled by world-class anglers, I’ve fished in more than a dozen countries. I’ve waded miles of Caribbean flats, watched the miracle of a tarpon leaping over and over again 100 yards away from the end of my line—dinosaur on a stick. I’ve been dropped off in the Patagonia wilderness and caught brown trout that have never seen a fly. I’ve stalked permit with the desperate look of a junkie at five o’clock in the morning wandering the Cabrini Green projects. I’ve stood slack jawed while a chrome-bright steelhead streaked back to the Pacific after a thirty-minute rodeo that left me standing there with my rod in my hand, rain dripping off my hood, and that dumb “wha’ happened?” look on my face. I was left feeling like I had to lie down or check into what my friend calls the “nervous hospital.” I am blessed and grateful for these experiences, and they all started on those little Pennsylvania streams.

I would get to see these creeks and rivers once I reached the legal hunting age during deer hunting trips with my dad and brothers. Crossing steel bridges over those pretty streams, I would press my nose to the side window and then crane my neck as they got farther from view. Moving water. In the fall of 1963 the U.S. Army sent my brother to Okinawa, my oldest brother was starting a career in banking, and my brother Paul was struggling through his college finals. Me, I was going deer hunting on opening day with my dad. Alone. When you are one of seven, time alone with one of your parents is a rare thing. A cherished thing.

We crossed the beautiful Clarion River as evening set in and turned up a little gravel driveway that led to a small, two-story wood-frame house wearing the inviting glow of a front porch light. It was owned by two very perfumed little old ladies who rented out rooms to hunters. And we were hunters. It was warm and clean. A good thing, too, because as we climbed the comfortingly creaky stairs and entered our room, it began to rain. It rained for three days. We laid out our boots, gloves, long underwear, and wool hunting coats that would absorb enough water over the next two-and-a-half days to add at least another four to five pounds to my already too big, hand-me-down attire. We climbed into the double bed, just big enough for an adult and one kid who still was one of the smaller guys in his class. He turned off the light and, after the standard adjustments before settling in for a night’s sleep—pillow positioning , throat clearing, blanket negotiating—my dad, who was meticulous, ran his hand through his thinning hair—hair that grew thinner and thinner as more of us were brought into the world. I remember how he smelled. Like a man. Like a working man. He smelled like Old Spice and work. We lay there. Some seconds went by and we discussed our strategy for tomorrow, the rain, etc. I threw in a token expression of what a tough break it was the brothers couldn’t make it, and then after some seconds we talked about the good fortune of finding a place after not making proper arrangements, as it turned out to be just the two of us and not a party of four or five.

Then we discussed the thing we were both thinking. Normally, during our hunting trips we’d be staying in a rough-and-tumble hunting camp with a bunch of rough-and-tumble hunters or in a cheap motel, or even sleeping in the car for a couple of hours if we left early enough not to need a room the night before opening day. All the other guys we knew were doing just that, and more than likely all the guys we didn’t know were, too. It’s hunting. We’re hunters. It’s what’s done. We acknowledged and accepted that we were deviating from the norm and bedding down in a very welcoming, dry, warm, and inviting guest house. A guest house that had pink wallpaper, nice lamps, clean furniture, and a cooked breakfast courtesy of two sweet little gals who were flush with what my mom used to call “rouge.” Secure in our masculinity, we accepted our situation and closed our eyes for some good old manly shuteye. We lay there in the silence with only the sound of the steady rain drumming on the roof. I waited. I waited a little more. Now, I thought. Drop it now. “Dad?” “Yeah?” “Maybe we shouldn’t mention where we stayed to the other guys when we see them.” I waited. My mom was Irish. Laughter to her was as easy as breathing. My dad had just enough Scottish blood running through him that he wasn’t exactly prone to mirth. I waited some more. I could feel the smile on his face grow without having to see it. Then a laugh. Pause. Another—this time bigger. Longer. Silence. “Good idea.” He rolled over with his back to me. Pause. Then the mattress softly shook, and I could hear one more laugh from the other side of the bed before he fell asleep. Nailed it. Irony, situation, timed and delivered with the precision of a surgeon, if I do say so myself. I lay there with a smile on my face that you couldn’t have erased with a jackhammer. I felt like a prizefighter. I felt like a gunslinger. I lay there. Smiling. Rain on the roof.

I would spend the next two-and-a-half days walking through the rolling mountains of Pennsylvania, cold and soaked to the bone. I would miss a fairly easy shot at a seven-point buck that looked at me after the fact with a look on his face that kind of said “you’re kidding, right?” before calmly trotting away. Missed with the punkin’ ball slug from a .410 shotgun that rests in my gun closet today. Didn’t mind at all.

Some years pass and I’m thirty-seven years old, and I’m crossing the sweet little river that winds through my ranch with my own little boy on my back, his arms wrapped around my neck, his chin on my shoulder, face next to mine. Trust. We climb up the bank and I put him down. As the sun sets, we walk across a hayfield, his little hand in my left hand and my fly rod in my right. Headed home. As we walk across that field with the porch light of our house glowing in the distance, I think my chest will explode with gratitude and joy. If you’re doing it right, the longer you live, the more you become just who you really are. When you’ve been fortunate, unless you’re flat out stupid—and some would say the jury is still out when it comes to me—your gratitude should grow in direct proportion to your years.