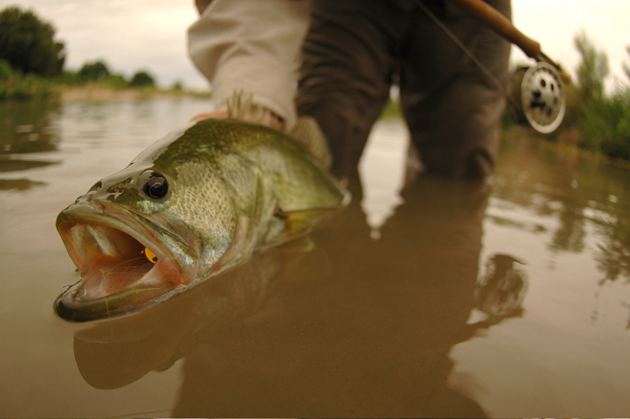 Guadalupe bass on a popper. Photo by Tim Romano

“WHEN A LOT OF PEOPLE think of freshwater and Texas, they think of farm ponds and muddy creeks,” Tim Romano began. “That’s not the case in the Hill Country. The rivers there are some of the most beautiful I’ve ever seen. Most are spring fed by the Edwards Aquifer. Some are gin clear, even at depths of 20 feet. Others have a remarkable aquamarine tint. Some have white limestone bottoms, others granite. Coming from Colorado, I thought I knew clear water, but these rivers have incredible visibility. I could take nine out of ten fly fishermen out on these exotically scenic rivers, and they wouldn’t believe they’re in Texas.”

The Hill Country can be roughly defined as the region stretching 100 miles west from the cities of Austin (in the north) and San Antonio (in the south)—though Tim pointed out that some Texans might beg to differ on where the region begins and ends. One thing is for sure—the ocean that once covered the region receded and the seafloor rose eons ago, and the limestone hills that define this region of central Texas and the aquifer that provides the lifeblood for its waterways began to take shape. There are a number of rivers that anglers can explore here. The Llano, , the San Marcos, and Devils Rivers are a few of the attractions for fly fishers. Each has its own character: The Llano courses through limestone and sandstone canyons, where raptor life abounds. The San Marcos flows through farmland and is lined with live oaks and old growth cypress trees. The Devils is perhaps the wildest river in Texas, running crystal clear through countryside that alternates between stark canyons and wooded hillsides. Though the Guadalupe River, also in the region, is the southernmost river in the United States to support a trout fishery, it’s the warmwater species that attract most visiting anglers—largemouth bass, smallmouth bass, and a fish peculiar to Texas, the Guadalupe bass.

Guadalupe bass are closely related to largemouth and spotted bass, though since they have evolved primarily in smaller streams, they do not attain largemouth sizes. The fish can be distinguished by a black, diamond-shaped pattern on the sides and stripes along the belly. Where largemouth tend to dwell in the slower, deeper water, Guadalupe bass prefer faster water, not unlike smallmouth; in fact, Guadalupe and smallmouth have interbred in some of the Guadalupe and Colorado river drainages, which encompass most of the Hill Country rivers. The resultant hybrid is an extremely aggressive fish that rushes to engulf a fly. (Biologists are concerned that future generations of Guadalupe bass are in danger thanks to the interbreeding.) Being endemic to the Hill Country and found only in Texas, Guadalupe bass gained the distinction of being the Lone Star State’s official fish in 1989:

WHEREAS, The Guadalupe bass is found only in Texas, inhabiting the clear, fast-running streams and small rivers of the central part of the state; and

WHEREAS, A member of the genus Micropterus within the sunfish family, the Guadalupe bass is one of a group of fish collectively known as black bass; and

WHEREAS, Though its small size prevents it being highly sought as a sport fish, the sheer abundance of the Guadalupe bass is a living testament to the sparkling purity of our state’s freshwater tributaries; and

WHEREAS, The Guadalupe bass is unique to Texas and will be a fitting addition to the distinguished roster of official state symbols; now, therefore, be it

RESOLVED, That the 71st Legislature of the State of Texas hereby designate the Guadalupe bass as the state fish of Texas.

Whether you’re finding official state fish or humble largemouth, much of the fishing on Hill Country rivers takes place from a canoe. “Canoes are the most versatile craft for Texas,” Tim continued. “The maneuverability, coupled with the speed of a canoe,  allow access to all the region’s streams. During periods of  low water, a canoe’s ability to access longer stretches of river and maneuver through rock gardens is key. They also make for a quiet approach. We’re not doing a lot of sight casting for the bass—mostly probing fishy-looking water with poppers and streamers.” If the thought of fly casting from a canoe is unnerving, take heart—on guided trips, anglers sit in front and cast while your guide steers from the back… and you’ll get out and wet wade the most promising riffles and pools. Bass are center stage for many visitors, but there’s plenty of warmwater species variety. “On the Llano system, we’ll sometimes walk the side channels to sight-fish for carp,” Tim added. “You’ll also likely have a chance to cast to Rio Grande Cichlid, another endemic species.”

“One of the five most memorable days of fishing I’ve ever had came on the Llano River,” Tim shared, “though it did come with a cost: a disease called bass thumb. The affliction affects the epidermis on the distal phalanges after repeated releases of largemouth and Guadalupe bass. Fishing with Johnny Quiroz, a photographer friend (who also does some guiding), I had a single yellow popper that I fished for the entire day. I must have released fifty fish. At the end of the day, Johnny inspected my thumb, which looked like it had been worked over with a belt sander. ‘You have bass thumb,’ he said.

“It’s a malady that I wish I suffered from more often.”

Tim Romano is a fine arts photographer, managing editor of Angling Trade and a frequent contributor to Field & Stream’s Fly Talk blog. He was formerly an editor with Fly Fishing Trade and Wild on the Fly magazines. Assignments have taken him to Alaska, Chile, New Zealand, Russia, and the Bahamas, to list just a few of his travels. Tim’s artwork is part of the permanent collections at Lake Forest College, Photo Americas Portland, Instituto de Artes de Medellin, Colombia, and the University of Colorado, Boulder. In 2005, Tim founded Guide for the Gulf to benefit fly-fishing charter captains impacted by Hurricane Katrina. He earned the award for Cover Design Excellence from the College Designers Association and has many magazine covers to his credit. He lives in Boulder, Colorado.

Prime Time: Fishing is open year-round in Hill Country rivers. Most fish best in the spring and fall, though on some systems, fishing can be good through the summer.

Getting There: The Texas Hill Country can be easily reached from either Austin or San Antonio, which are both served by many major carriers.

Accommodations: When visiting the Hill Country, Tim often stays in the music and barbecue hub of Austin, and the Austin Convention & Visitors Bureau (888-463-0211) outlines lodging options. If you’re fishing on the Llano, Tim recommends Raye Carrington’s (866.605.3100), a B&B right on the banks.

Equipment: A 5- or 6-weight rod rigged with floating line will work for most situations. A regular assortment of bass flies—including Poppers, Woolly Buggers, crayfish patterns, attractor drys, and baitfish patterns—will all work in the Hill Country.