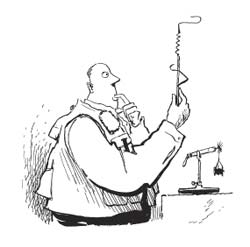 I KNOW THAT fly fishermen are supposed to be gear-obsessed, and to a certain extent, most are. I am more intrigued, however, not by the fisherman who has everything, but by the fishermen who have virtually nothing. I would say that anyone, for example, who fishes with a Pflueger Medalist reel, and cannot really say precisely what kind of rod he has other than it had once belonged to his grandfather, would fall into this category. I have a friend who only fishes with flies his late father used. In fact, the one time I went fishing with this friend, his father, who had died some years before, came with us. In a can. I think it was a coffee can. In fact, we had to go back to his house and get his father’s remains before we left.

I have to say that I actually enjoyed fishing with his father, who, unlike a lot of people I fished with, never complained loudly about how lousy the hatch was, or how hard the wind was blowing, or how all the trout were short-striking. When we got down to the river, the father sat in the car, didn’t bum flies, and generally occupied his time politely while we flogged the water into billowing suds. As we were driving back, I found myself directly addressing the father as well. He did as well as we did—nothing.

Anyway, my friend wasn’t gear-obsessed. I liked that. I would say that I am not, either; but I was, 15 years ago. I had lots of reels and spools, too many expensive rods, the cool bag from Orvis that I now use to put the overflow fly boxes from my vest in, and about 16 billion little gadgets in my vest that I never, ever used. I think I had about the normal level of gear for someone of my skill set. On the other hand, my much more skilled angling friend Jim Ramsey, whom I fished with constantly at the time, had a pretty low-end Orvis rod, a Scientific Anglers reel, and a vest that smelled. It smelled very bad. It smelled like me and the Pittsburgh Steelers after we had been fishing all day. It had this big dirt smear on it—look, it wasn’t dirt, it was more like dirt, slime, fish poo, river algae, and anything else that came out of whatever orifices man and fish possess—and I actually became so physically ill when I looked at his vest that I finally, for his birthday, bought him a new one. I couldn’t take it anymore. Thank God he decided to wear it, because the one he had was something out of the 14th century in terms of public health.

As I dug around my fly vest and tying chest the other day, I came upon things I never use. I do not wish to name manufacturers, because, well, that’s not fair to them, because I know that other, more intelligent anglers make very good use of what these people make. I will refer generically to these things, and hope none of the manufacturers figure out what I’m referring to and issue a fatwa.

I have tried to use one once, and it seemed like it only compounded my fly-fishing dyslexia. I know it’s supposed to be easy to use, but it was the turnaround phase aspect of it that left me… um… feeling almost ill when I tried it. Besides, what’s the whip part all about? What is the whip? How do you finish the whip? Is the whip incomplete without the finisher? Hmm? Tell me. I know. I will get 600 e-mails from readers telling me precisely when, how, and why to use a whip finisher, and I will appreciate hearing from you all, but I am not interested. Save it. Send me some flies instead so I don’t ever have to use a whip finisher. Thank you.

Bottle of That Fly-Drying Dust

I have had the same bottle of fly-drying dust for about 18 years. I have used about one-third of it. I call it Fly Sugar, because that’s what it looks like. I can’t imagine what the markup is on it, and I bet sugar works as well as or better than this stuff. My buddy uses it all the time, but I just false cast constantly anyway. I know I should use it. Sorry.

Those Little Sinkers from England

I bought a container of these things about 20 years ago, and I still haven’t touched them. I may have put one on, once, as a kind of “Hail Mary” to get a streamer down farther, but usually these sinkers just sit quietly in my vest, drinking lime and lagers, eating bangers, and waiting for the British Empire to reassert its primacy over the Realm. They’re cute and all, but I just don’t use them.

Well, when I first got this net for catching and identifying whatever was floating downstream, I pulled it out a few times and felt like an undergraduate biology student the whole time. I am sure I would be a better fisherman if I actually used it, but it just never occurs to me. I am now to the point where I can kind of tell what’s going on, anyway, or I have pretty good intelligence from someone about what nymphs to put on. So this is another thing that sits in my vest, chatting up the little sinkers from England.

I have used this a few times, like 15 years ago. The thing is, thermometers only measure what you already know: the fishing sucks because it is too cold or too hot. All knowing the water temperature is going to do is buy you 30 seconds of conversation back at camp.

“Man, the fishing really blew this morning. My thermometer said the water temperature was 36 degrees.”

If a thermometer could somehow measure why in God’s green earth trout aren’t taking my perfectly presented, well-tied, hatchmatched fly, then I might have some reason to pull it out. It doesn’t. So it stays in the vest. 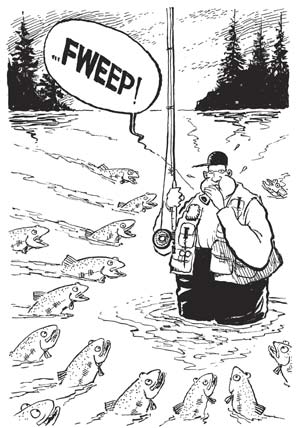 Back when I went through what many fly fishermen go through—the By God, I’m Getting Serious about Fly Fishing or Quit Moment—I bought this cool leather leader wallet. At the time, I was making my own leaders or using only hand-tied leaders made by friends (you can see why the divorce rate among fly fishermen is above average), so of course I needed to buy the requisite container (fly fishermen love containers of all kinds, and hoard them: coffee cans, cigar boxes, film canisters, small plastic boxes, Ford Explorers), so I picked up the leather leader wallet to go along with the duck fabric, leather-bottomed satchel, and the two cane rods I bought in quick succession. Now I just jam the manufactured leaders in my vest and don’t really do the micro-obsessoid hand-tied leaders anymore—I have other things to obsess about, such as why I write more about fly fishing than actually fly fish.

This thing is like some sort of bizarre 1950s design inspired by B-grade alien movies. At twilight, when I am supposed to be using it, I just keep forgetting I have it and just mutter a lot about how I can’t see. I prefer cursing the darkness rather than lighting a candle. I just kind of tie on the fly in the fading light by the Braille Method rather than, you know, becoming Man the Toolmaker. Sometimes I put a little flashlight in my mouth. Then I really look like a 1950s alien movie.

Yes, I actually have a portable fly-tying kit in my vest. I spent hours putting it all together, with a special emphasis on midge materials as well as enough fur and feathers to whip out a half dozen of virtually every conceivable dry pattern nature can throw at me. I have used it once, in 1993.

There was some midge hatch coming off in Idaho on the St. Joe River, and I couldn’t get them to take my usual Griffith’s Gnat gambit. The Griffith’s Gnat is what you throw at them right before you start crying, unless, of course, you have assembled a portable flytying kit. What I don’t like about having a portable fly-tying kit is:

A. It eliminates any and all excuses about not being able to match the hatch.

B. If your buddies find out you have a portable fly-tying kit in your vest, they will want you to tie up some flies for them, if you’re not doing anything at that moment. I have spent a decade and a half not telling my friends that I have one on me. I still have it, but, you know, I am not going to bang out five #22 chironomids just because one of my lesser-prepared comrades asks me.

I have better things to do. Like clean out my vest.

I just blow into it, and the trout come. Apparently it emits some sort of high frequency pitch that only can be detected by trout, and the thing really works. Mine is made out of engraved myrtlewood with a scrimshaw inlay; it was hand-carved by Norwegian fishermen in the 1870s, and it’s worth thousands and thousands of dollars. Very intricate. But I hardly ever use it now because I am so danged good at fly fishing.