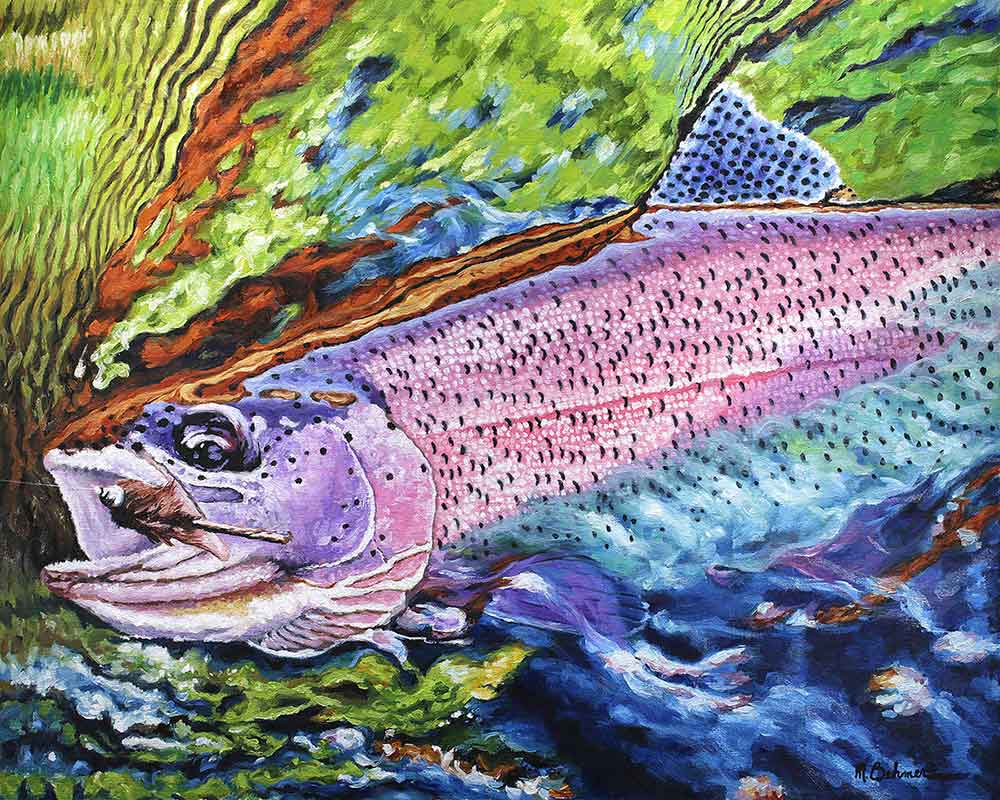 Mark Behmer is an artist and fisherman from Northeastern Michigan, specializing in original oil paintings of the outdoor sporting experience.

Mark started drawing at a young age. He grew up in Detroit, MI and after graduating from high school in the late 60’s he enrolled in a commercial art program at Oakland Community College. After a semester in taking the core design classes he became increasingly interested in the painting, drawing and fine art classes he needed to take. He transferred to Northern Michigan University as a fine art major for a year, transferred again to the Art School of the Detroit Society of Arts & Crafts (Now the College for Creative Studies, CCS) in Detroit.

In 1972 Mark moved to Chicago and in 1975 graduated from the University of Illinois at Chicago with a BA in art education. Even at that time art was beginning to be cut from school programs, so after spending 2 years substitute teaching and trying to find a job he went into commercial art and became an illustrator/graphic designer. He built his own freelance business and worked successfully for years, but always felt that painting and fine art was where he really belonged.

He has exhibited in the East Shore Art Guild Gallery in Harrisville, MI and in Mullaly’s 128 Studio & Gallery in Elk Rapids, MI, Art In The Loft Gallery 109 in Alpena, MI, Thunder Bay Arts Council Gallery in Alpena, MI, and the Ann Arbor Art Center in Ann Arbor, MI.

He was Honorable Mention Award Winner in the 2009 and 2019 Juried Art Exhibition at the Besser Museum for Northeast Michigan in Alpena, MI.

His work has appeared in Gray’s Sporting Journal, and Michigan Trout Unlimited Magazine.

Having grown up in Michigan the love for the outdoors came natural to Mark. As a dedicated conservationist and avid fisherman and sportsman he merges his passion for the outdoors into every facet his art. He is a member of local chapters of Trout Unlimited, and has been commissioned to paint portraits for Pheasants Forever chapter fundraising auctions. In addition he has contributed limited edition framed prints to DU and TU fundraiser auctions.

Mark’s paintings have been described as painterly impressionistic realism. He paints in oils on linen.