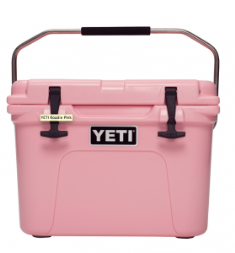 “YETI Coolers is proud to create a special edition pink cooler collection to support breast cancer awareness,” says Roy Seiders, President of YETI Coolers. “We hope the pink coolers will appeal to a female audience and we also believe at least some of our male consumers are man-enough to pull it off. Yes, that is a challenge. ”

The Roadie 20 (MSRP $249.99) and Tundra 45 (MSRP $349.99) are built with a hardy one-piece construction that can handle serious abuse and is designed to last. The Coolers have extra thick insulating walls to keep ice much longer than the average cooler. They are grizzly proof when used with YETI bear-proof locks and the No Sweat Design prevents condensation on the outer surface of the coolers. The Roadie personal cooler is equipped with a heavy-duty stainless steel handle for easy carrying and the Tundra features two DoubleHaul Handles made from durable marine grade nylon.

YETI will roll out the Roadie 20 and the Tundra 45 in Pink on October 1 at select retailers and online at yeticoolers.com.

About YETI Coolers
Wildly Stronger! Keep Ice Longer! Whether you’re a hunter, fisherman, outdoorsmen, camper, or tailgater, demand more from your cooler. For more on the company and its full line of products and accessories, visit www.yeticoolers.com. And, don’t miss the video of a Grizzly attacking a YETI Cooler!