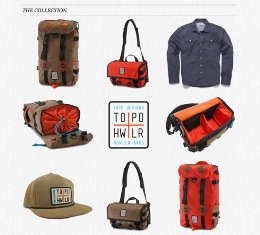 Howler Brothers recently launched its latest collaboration with Topo Designs. Not only do they share the same passion for fly fishing, travel, and life outdoors, but like Howler they have built a brand on great design inspired by the classics, rugged functionality, and the pursuit of adventure. Coming off the success of the first Topo X Howler collaboration, the brands have developed limited editions of two new pack offerings: the the streamlined Klettersack 15L and adventurous Field Pack. Both bags are available in Coyote Brown and Orange. They also created a Topo X Howler Gaucho Snapshirt for the collaboration and a co-branded Corduroy Snapback Hat. From the airport to the stream to dinner back in town, this gear has you covered. Check out the entire collection at HowlerBros.com