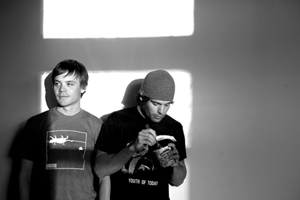 TR: Tell us a little about Felt Soul. Do you guys have a significant others? Kids? Dogs? Boats? Where do you live?
BK: We’re both single, lonely hoarders who live in a single-wide trailer in Paradox, CO with tires on the roof and a cat barn in the back yard. We started with just a few cats, but Travis was too cheap to get them fixed…. We’re really not sure how many cats are in the barn now, but our meth-witch of a neighbor left a note last week saying she can smell them from across the road.
TR: How did you two meet?
BK: I was working as the photo editor at the Telluride Daily Planet, and this incredibly pushy woman told me I should hire Travis to shoot for me. I told her that he could come ask me himself, and eventually he did. I liked him for some reason.

TR: How long have you been in the fly fishing business/industry?
BK: I don’t think we’ve ever been in said industry…. It’s only been a few years since we quit our days jobs and rolled the dice with the whole self-employed thing. After making a film with a strong conservation message [Red Gold] we’re leaning more in that direction. BUT, we do owe a lot to the fly fishing industry… companies like Scott, Patagonia and Sage have always had faith in our projects and helped out when possible.
TR: A lot of people start out as guides in this industry, did you guys?
BK: Travis was a guide in Telluride for a while until they let him go for telling a client to “Get your own damn fly out of the tree and tell your wife to stop eye-raping me.” I’ve never guided, and actually pretty much stopped fishing when we started making films about it. Tragic, but true.
TR: How Many films have you made specfically for the fly fishing industry?
BK: I guess none really… we’ve always tried REALLY hard to edit our films in a way that anyone could enjoy, not just fish nerds. It just so happens that they’re all pretty fishy. The Hatch, Running Down the Man, Red Gold and Eastern Rises.

TR: What’s your favorite?
BK: Red Gold is the most important project I’ve ever been involved with in my life, and I’m incredibly pleased with the reach and impact it’s had—bringing attention to the Pebble mine issue. Eastern Rises though… I’m really pleased with how it’s turned out. I think there’s a couple scenes that could actually cause fish-porn induced seizures. I’ve definitely never seen a fishing film like this.
TR: I also heard Red Gold will be aired on PBS.  Is this true?  Can you give us the details?
BK: Yeah… It’s true. It’s out of our hands now, and it’ll look different… but it’s still a huge honor. Last we heard was fall of 2010, and I think they changed the name to ‘Alaska Gold.’ It’ll be a FRONTLINE program, and it’ll hopefully reach a few million viewers which will be incredible press for the issue. We’re still pinching ourselves over that one… such an unbelievable opportunity.
TR: I saw your latest project teaser last year on the Fly Fishing Film Tour. About Kamchatka if I’m not mistaken…  What ever happened to that film?  Will it be a full length feature at any point?
BK: I finished Eastern Rises last night… yay! After winning the Drake award in 2008 for the trailer we had to put it aside to finish a project for 1% for the Planet. Now it’s finally done, and it’ll be premiering at the Telluride Mountainfilm festival in May. We’re going to try and have the DVD available on our website shortly after the premiere. I’m ridiculously exited for people to see it. It’s such a crazy junk-show adventure with more hot fishing action than any of our previous films combined. AND, it even has something rare called a ‘story’.
TR: What’s been your most memorable fishing trip in regards to photography/video? Why?
BK: Russia. It was brutal. I’ve never been so miserable in my life. Trying to film with thick swarms of insects drawing blood from any exposed skin they could find… It may be the last fishing film for me. Sure, maybe I’m just a pansy, and not a true fisherman. That’s fine, I can take it. I have massive respect for Travis, because when I’d run off into the woods screaming, he’d step in calmly and capture some of the most gorgeous and difficult to film fish-on-fly violence that I’ve ever seen.
TR: On a typical shoot what do you bring along?  I’m not talking about everything you own, but what’s in the bag?
BK: Russia, for example was a test for that… In addition to a 16-foot camera crane that [to Russian Customs officials] looks like a broken down missile launcher in it’s coffin sized case, we brought Frank Smethurst. Like the crane, he’s quite heavy and awkward to handle. Normally we try to travel as light as possible with two cameras [one for back-up and underwater], still gear, a lap top and a few pocket drives.

TR: What single tip would you give a person looking to hone their skills as a photographer or Videographer? Specifically in regards to fishing?
BK: It’s all in the details, and the ‘In between moments’ I think. The subtle stuff. I think that’s where you fall in love with a film or a character…or a river or place for that matter. You don’t need someone on camera telling you how beautiful something is. To me, it’s not all about the fishing. It’s about the journey, the place, the history and the people involved. We all get giddy seeing a fish rise, but I like seeing all the little moments that led up to that point too. P.S. I have no idea what I’m talking about.
Photo credit http://www.mcnairevans.com

Photo Essay: A Tribute to Guides